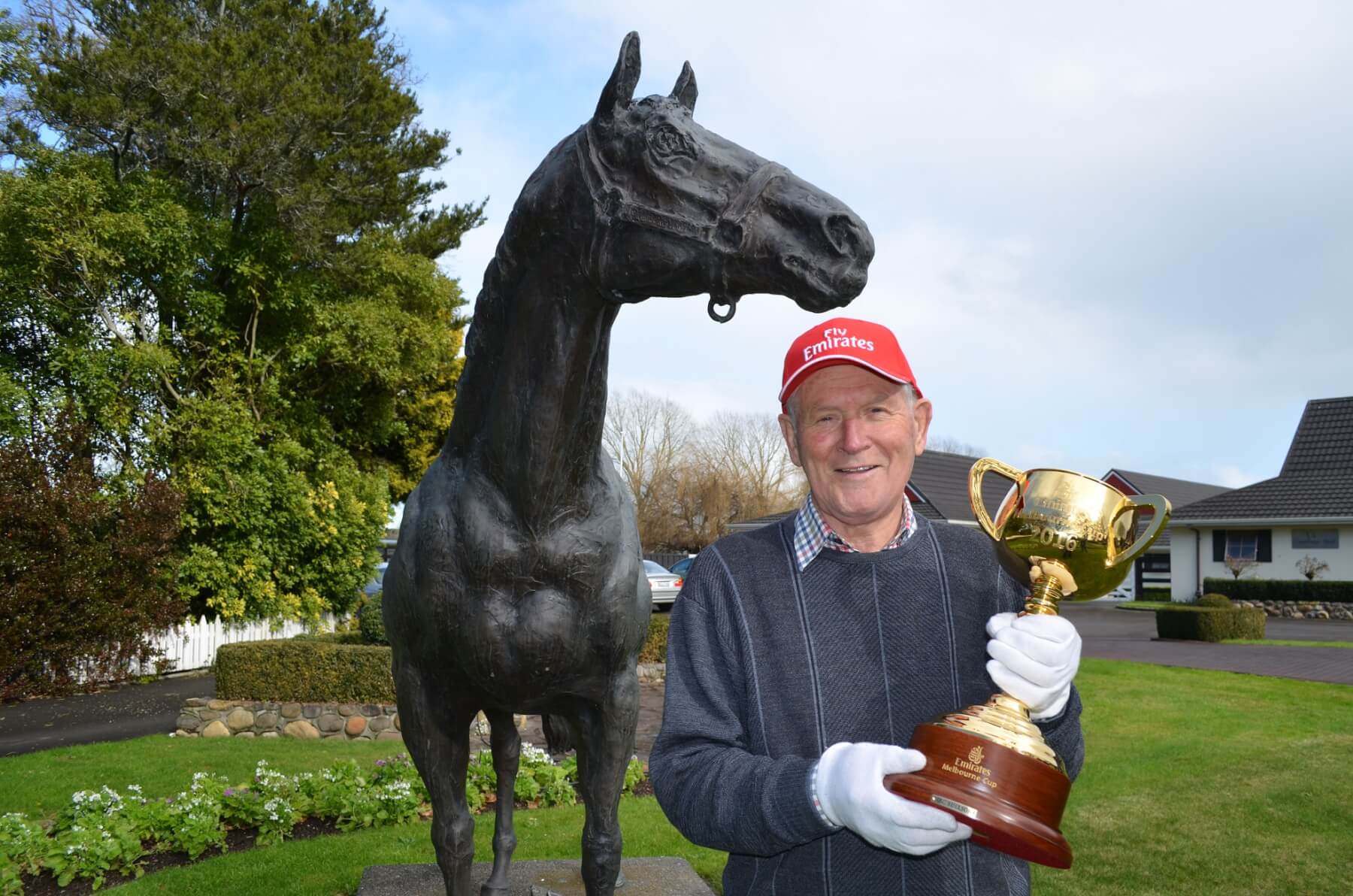 Sir Patrick Hogan, pictured with the Melbourne Cup when it visited Cambridge in 2016, and the Sir Tristram statue.

The thoroughbred world is mourning the death of Sir Patrick Hogan, 83, who passed away in Waikato Hospital after a period of ill health.

From humble beginnings and with a determination shared by his wife Justine, in 1976 Sir Patrick founded Cambridge Stud, a nursery that was to reshape the bloodstock industry and draw unprecedented international attention to New Zealand.

In a masterstroke that was to reap huge accolades and rewards for Cambridge Stud, Hogan selected Sir Tristram as his foundation stallion.

With just two wins from 17 starts, Sir Tristram had a modest race record, but his new owner’s implicit faith in the Irish-bred stallion’s bloodlines – franked by his own Irish heritage – set the platform that would see Cambridge Stud become the dominant force through subsequent decades.

Long-time associate Joe Walls, both a friend and business associate in his role as chairman of New Zealand Bloodstock, spoke on behalf of many when describing Patrick Hogan’s contribution to New Zealand’s proud heritage.

“I have been fortunate enough to have known Patrick and Justine for more than 50 years and my association was more than just a client, salesman one. They have been amazing friends to both Wendy and myself,” Walls said.

“Two such great horses in Sir Tristram and his son Zabeel couldn’t have been placed in better hands. His dedication to the industry, his marketing skills, his flare and his professional fairness put the New Zealand industry and the national sales on the map internationally.” 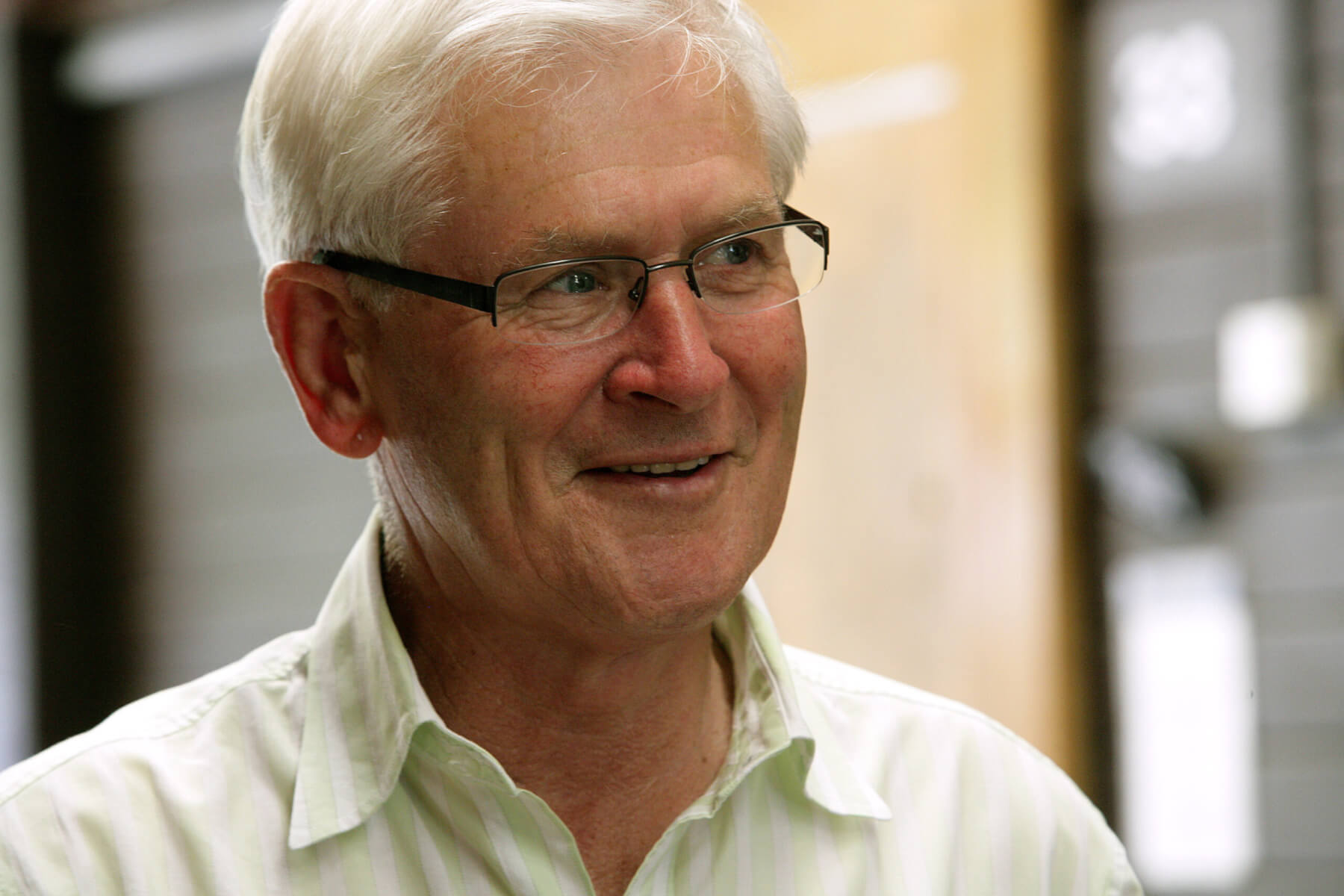 Even as a boy growing up on the family farm where horses and cattle shared the paddocks, Hogan’s special talents shone through.

Ribbon-winning dairy calves provided the springboard to parading Fencourt Stud yearlings at the annual Trentham sales as a teenager, and once he had his own draft under the Cambridge Stud shingle, he brought a new standard to promotion and marketing.

What was to become a legion of Cambridge Stud staff quickly learnt the Hogan way of impeccable personal presentation and the expectations of the man known respectfully as The Boss.

Not only did they follow his example of preparing and showing off stud graduates to their best advantage, but so did rival breeders take note as the bar was continually raised through the influence of one man possessed with passion and vision par excellence.

“For me personally and for so many other people who were mentored by Patrick it’s a very sad day,” said Marcus Corban, whose association with Hogan spanned four decades in a career that grew to becoming Cambridge Stud general manager.

“He was a great mentor and to me he was like a father; he was a perfectionist, a great thinker, he was passionate, so methodical with his matings and everything he did.

“When I think back on Patrick’s life and what he achieved, that also includes his rock, Mrs H (Lady Justine), who was with him from the very start. It’s a terribly sad time for the family.”

Hogan was to freely admit in subsequent years that the best thing that ever happened to him and Cambridge Stud was Sir Tristram, but the contemporaneous point raised by others is whether anyone else could have achieved so much in moulding the stallion into the breed-shaping champion of the late 20th Century.

Sir Tristram sired top class racehorses of virtually every description, from a Golden Slipper winner to a multitude of classic and cup winners, not forgetting numerous leading jumpers.

All up he left 45 individual Group One winners, a figure that surpassed legendary North American stallion Northern Dancer’s record. Amongst them was the horse that, through another inspirational Hogan call, was to continue his sire’s legacy.

Australian Guineas winner Zabeel took up duties at Cambridge Stud in 1991, initially alongside Sir Tristram, who was to die aged 26 in 1997.

In a graphic illustration of the Hogan guile, Zabeel stood out amongst Sir Tristram’s sire sons, quite incredibly matching his exact tally of Group One winners as well as notching a raft of stallion premierships.

The legacy founded by Sir Tristram has continued to the present day, as witnessed by the number of class performers with his blood in their veins and now headed by his grandson Savabeel, New Zealand’s dominant sire of the past decade.

“In my lifetime there has been no greater influence in the New Zealand breeding industry than Patrick Hogan,” commented Sir Peter Vela, principal of New Zealand Bloodstock.

“This country was so fortunate to have someone like him; he was a great horseman, his knowledge, what stallions to develop and how to grow the industry, so from every point of view his passing is just so sad.

“He was a hugely significant man for the things we can see and also for his generosity which was perhaps less well known, whether it was someone in need or the many people he shared his knowledge with.

“His name and persona was, and always will be, synonymous with the New Zealand thoroughbred breeding industry and his massive contribution to putting this country on the world stage.”

Other high points in Hogan’s life centred on the many international visitors to Cambridge Stud; indeed he rated the 1990 visit by Queen Elizabeth ll – herself an expert in thoroughbred matters – as the standout highlight of his life.

The following year Hogan was awarded the CBE (Commander of the British Empire) for services to racing and the community, and that was followed in 2000 by the ultimate Royal Honour, a knighthood.

In author Dianne Haworth’s landmark biography “Give a Man a Horse”, Hogan reflected on Her Majesty’s visit with the following words: “We hosted the Queen for lunch at our home, and from time to time I still think, ‘Was she sitting at our table or not?’ That to me is the greatest award.”

Sir Tristram and Zabeel were instrumental in Cambridge Stud’s 31-year reign as the leading vendor at the National Yearling Sale, while Hogan’s two-tone green (and very Irish) racing colours became a familiar and successful sight at racecourses on both sides of the Tasman.

With no heir apparent to take over the reins at Cambridge Stud, several years ago Hogan was faced with the very real likelihood that the nursery that defined his life’s work would pass into foreign ownership.

His quandary was solved when Brendan and Jo Lindsay, with whom Patrick and Justine Hogan could draw familiar parallels as a self-made Kiwi couple, entered the picture and in 2016 bought Cambridge Stud as a going concern.

While the name Hogan would no longer be directly involved in the iconic nursery, it will forever be recognised that none of what has been achieved over nearly half a century would have been possible without the indelible imprint of one of our greatest visionaries.

Sir Patrick Hogan, who was aged 83, is survived by his wife Lady Justine, daughters Erin and Nicola, four grandchildren and four great-grandchildren. 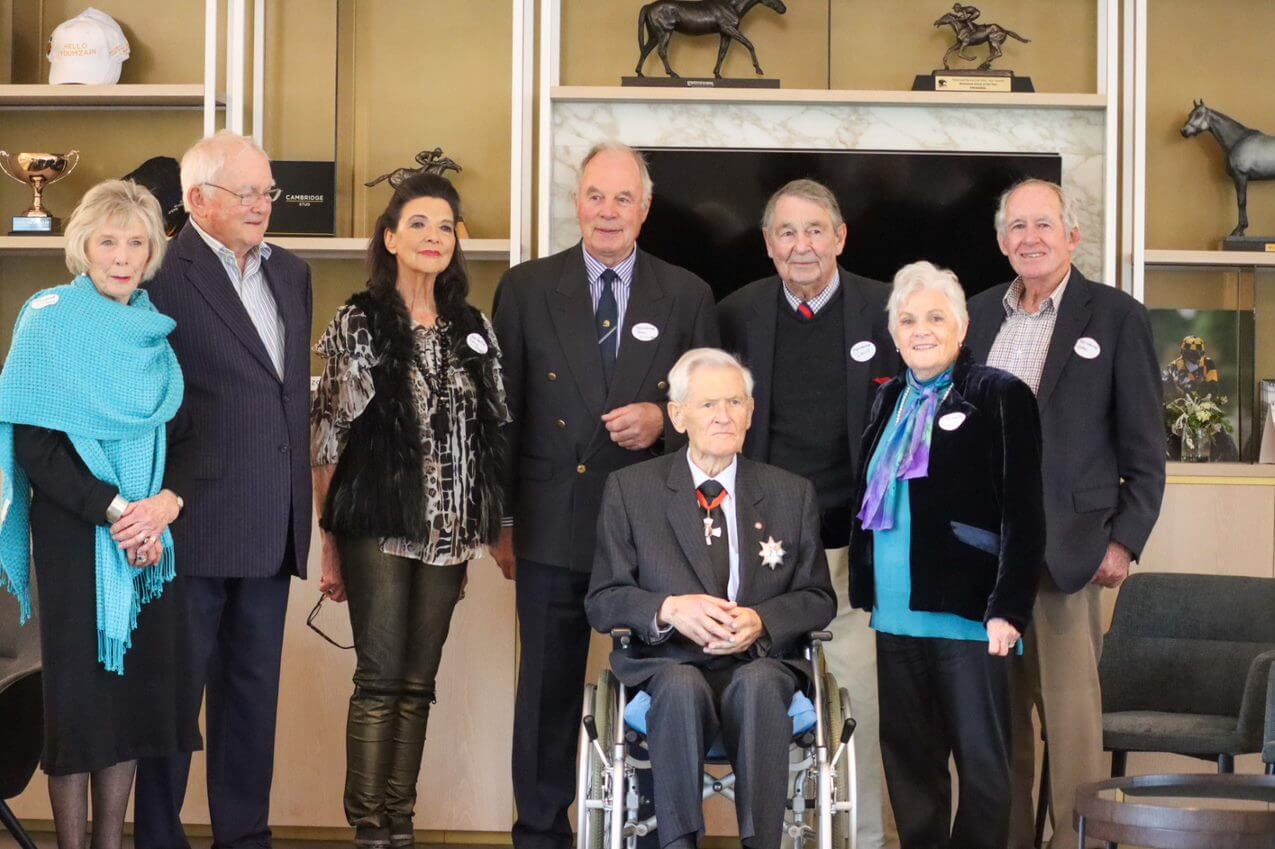