The Ferguson Bridge roundabout at peak time shortly after 5pm with traffic streaming down the hill from central Cambridge.

A quick fix for Cambridge’s traffic congestion has been rejected by Waka Kotahi.

The suggestion to add on and off ramps to Waikato Expressway at the southern end of Cambridge near Cambridge Golf Club came from several submitters to Waipā District Council’s draft Transport Strategy this week.

Beard encouraged the council to “absolutely argue, yell and scream at Waka Kotahi that an on ramp to go north be added.”

“It would also mean trucks and large vehicles do not need to go through the middle of Cambridge town to go north. As Leamington and all its new subdivisions grow over the next five years, only more traffic will want to use the motorway.” 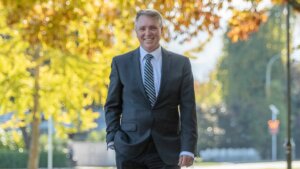 Fox-Worthington, a real estate agent in Cambridge for 16 years, said it would be the most economic solution to the town’s traffic woes.

It would entice Leamington traffic to turn right from the low level (Ferguson) bridge and then left onto the Expressway – rather than go through town and onto the St Andrew’s Church roundabout where the congestion is at its worst.

An off ramp would also work for drivers coming off the Expressway and going to Leamington, he said.

“There were a number of factors that were considered when formalising the design.

“For example, the amount of traffic likely to use any given route was balanced against cost.

“In this case, there would be relatively low traffic movements on these suggested ramps and motorists wanting to travel in these directions have other options.

“The Victoria Road interchange provides both northbound and southbound connections to the Cambridge township, some five minutes from this point,” said Wilton.

There are no plans to provide additional access points at this stage, she said.

Council staff in their response to the submissions said Waka Kotahi was not in favour of north bound ramps as it would encourage short trips around the town on the expressway which was not the purpose of an expressway and would lead to traffic congestion at ramps at peak times.

Fox-Worthington said that was nonsense. Peak time just after 5pm at the southern end of the Waikato Expressway – while Cambridge is congested.

“I go about two kilometres out of my way to get my child to school but I would not go on the Expressway to do that.”

The biggest congestion problem in the town was the St Andrew’s Roundabout and anything which took traffic away from there, would be welcomed by residents, he said.

“Cambridge needs all north bound and northwest bound traffic from Leamington to be diverted from going through the town centre.”

Bouzaid said the council should look at some tactical solutions in the short term to control congestion while long term solutions were addressed. An on/off ramp would provide that, she said.

The Waipā District Council transport strategy, on the back of controversial efforts to make Cambridge more pedestrian and cycle friendly, is one of its most significant and controversial.

Council has struggled to get its messages through, even to some of its own councillors and there is a palpable lack of confidence the council is on the same page with residents over the timing of work on a third Cambridge bridge across the Waikato River.

It is no surprise to see submissions on the strategy run to over 650 pages. They have also thrown up some innovative ideas – notably calls for an off ramp to the north of the Waikato Expressway into Tirau Road near the golf course. The logic behind the proposal is clear – and the issue demands investigation.

The News has read all the submissions and will continue to give the transport issue a high priority.