Cambridge Chamber of Commerce chief executive Kelly Bouzaid and Waipā Cambridge ward representative Roger Gordon say they are worried there is not enough time for feedback and the data around growth projections was too questionable to be relied upon.

Their comments came in the same week St Peter’s School announced it would create hundreds of residential sections between the Velodrome and Te Awa Retirement Village. 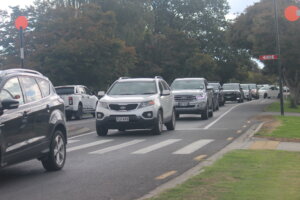 Developers were reading the market and concluding the demand for sections in Cambridge was now, not in five years. When the Waikato Expressway Hamilton section opens soon, cutting 20 minutes off a trip to and from Auckland, more pressure would come on, he said.

“We’ve got another lever now getting pulled to keep the market going in Cambridge.”

The strategy recommends a further detailed study of the Cambridge arterial routes and bridges to examine likely issues.

But Gordon says those issues have already arrived. The need for a third bridge was obvious and given its location would “probably” be in the area where St Peter’s was developing its sections, the council better get a move on securing a site, he said. Gordon, who recently returned from two months in the UK, spent two weeks in MIQ poring over the strategy.

“You can’t just talk about urban Cambridge, which is 20,000 people. You’ve got to talk about the areas outside the old urban boundaries.”

“When you add those in, you’re talking about 28,000-30,000 plus people. Our development now is outside urban Cambridge and you’re forcing all traffic into those two roundabouts and onto those two bridges.” Traffic on the stretch of road between St Andrew’s Church and the Town Hall was already greater than what it was when it was part of State Highway One before the Waikato Expressway opened in 2015, said Gordon.

“It is close to being at capacity and the capacity of that stretch of road is constricted by the fact you have a roundabout at either end.”

The Chamber of Commerce was instrumental in getting the consultation period extended a fortnight until 5pm on Tuesday March 22. But like Gordon, Bouzaid said she is worried the strategy is already out of date. “Our businesses have got so much to be thinking about and they just didn’t have time to make a submission. This gives us some time to get in front of the people.

“There are shortfalls (in it) and questions we have.

“It is using data which has proven inaccurate in the past and we want to address that.”

Significant employers like businesses under construction in Titanium Park adjacent to Hamilton Airport had not been considered, she said.

The draft strategy replaces the 2010 Waipā Integrated Transport Strategy and will be reviewed every five years. Submissions can be made on the council’s website or at council offices.

What do you think? Let us know editor@goodlocal.nz