Those who gathered around the blue and yellow lit Cambridge Town Hall on Friday did so for “one simple reason,” Cambridge High School head girl Anna Smith says.

“[We gathered] to show our support to an innocent country full of mothers and fathers, sisters and brothers—normal people that had normal lives much like our own. All of them did not ask for this tragedy.” In a week-long event spearheaded by Anna and deputy head boy Cole Sherborne, both the Town Hall and clock were lit up in the Ukrainian national colours of blue and yellow from Wednesday 23 to Friday 25, continuing through this week.

“We will think of those unfortunate children who did not ask to be brought up in a world of war,” Cole told the small crowd.

Anna spoke of her pride at Cambridge’s willingness to support.

“The fact that we have gathered tonight under these beautiful lights makes me so proud to be a part of a community that is so giving and willing to help,” she said.

RSA member Patrick Clark, who served in the Air Force for 20 years, with a peacekeeping mission overseas, praised the students for their initiative in “thinking for others other than themselves”.

“I have some sense of what’s taking place”, he said.

When Cambridge High contacted the RSA, he said, members were given the choice of whether to attend the vigil.

“I was never not going to attend,” Clark said. “It’s about showing solidarity.”

The illumination of the Town Hall and clock is a test of a new policy regarding lighting the buildings for non-official events, developed by the community board and the council.

Sponsorship to cover the cost of the lighting was covered by John Mason from Construction Advantage, as well as the Chamber of Commerce, Steen and Morrow and the Cambridge Community Board.

“As long as we can remember why we have it.”

The vigil on Friday followed a NZ-wide ‘Schools for Ukraine’ mufti day, in which students brought yellow and blue clothes to school, to raise funds for Save the Children’s Ukraine crisis relief fund.

Those wanting to donate can do so at savethechildren.org, or at the Schools for Ukraine page on Givealittle. 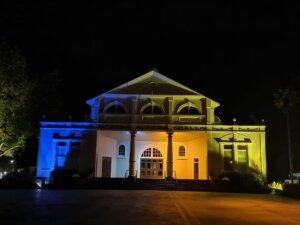 This comes after the Cambridge Community Board recently agreed to new regulations for lighting the exteriors of the two Council assets.

The guidelines will now be taken to the Te Awamutu Community Board for its approval of lighting Te Awamutu buildings on specific occasions.

Morris said in recent years Council had received a number of requests from local and national charities to light up the historical structures, however to date there had not been a set of guidelines to adhere to for these requests.

“This has prompted a review of the process and creating a new process for applications to light up our historic structures.”

Many more requests have been anticipated and the guideline would ensure this was managed efficiently and with ease, he said.

The lighting of the Cambridge Town Hall and Clock Tower are available to be booked by community groups and charities that are able to meet the cost of the works, submit the appropriate application and meet at least one of the following criteria:

Applications ideally would be received at least four to six weeks in advance of the date required and Council has the right to decline any application based on these guidelines, Morris said.

Further work is also underway to create guidelines for lighting up other Council-owned buildings in the district, based on councillors’ request at the meeting.