Waka Ama sprint nationals are back on Lake Karāpiro this week and wrap up on Saturday. Senior writer Mary Anne Gill spoke to competitors, coaches, spectators, stall holders and staff on day one and found anticipation, emotion and joy. 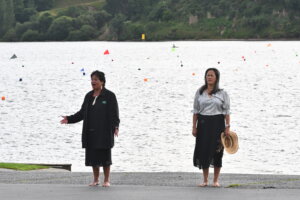 Gaye King and Lee Ann Muntz from Ngāti Koroki Kahukura doing the karanga at the pōwhiri as hau kainga to manuwhiri come in. Photo: Supplied.

Laurie Tauroa says his emotions got the better of him during the pōwhiri on Sunday morning for the 33rd annual Waka Ama sprint national championships at Lake Karāpiro.

It has been two years since the event has been held and for him to be part of the pōwhiri led by his Ngāti Korokī Kahukura and Ngāti Haua iwi, was “tear jerking.”

They are the hau kainga (home people) of the regatta.

Laurie, who went to Te Awamutu College, his wife Ariane, whānau and friends are competing for the Karāpiro Waka Club which is surprisingly one of the smallest of the 63 clubs in action on the water entered into seven categories across the week.

The local club is competing in only its second nationals yet has no physical home. It was formed after Te Wānanga o Aotearoa signed a memorandum of understanding with the iwi and ran its year-long Level 4 Certificate in Waka programme for about 25 iwi members at Lake Karāpiro.

Its two waka Rangakura and Rangatahi – donated by Tainui to Ngāti Korokī Kahukura and Ngāti Haua iwi – are stored at their home in Pukeatua even though there are five rowing clubs on the lake. 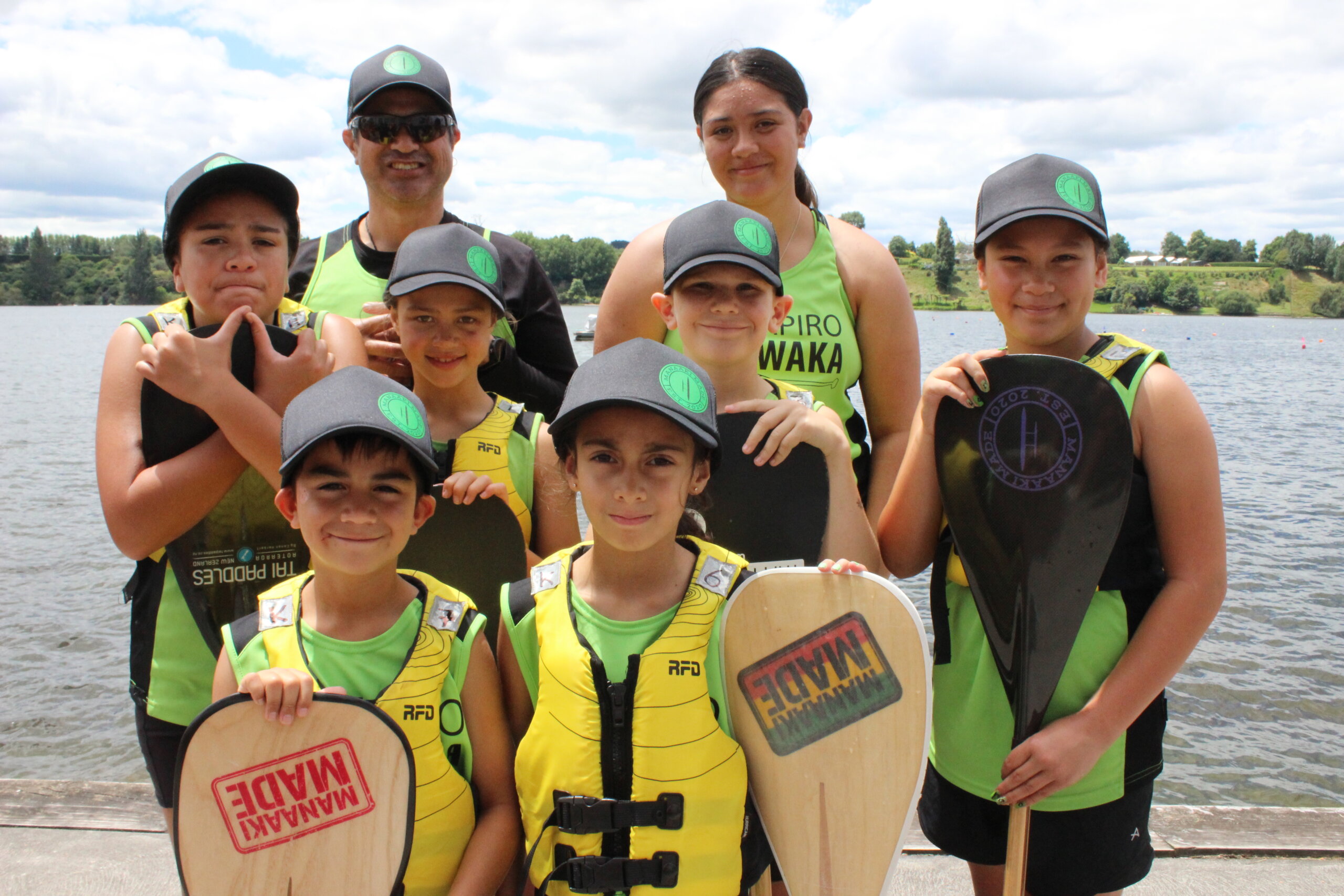 “It’s lovely to be here, lovely to be on our own water and to be acknowledged,” said Laurie who coaches the 35-strong junior contingent.

“For us in the community to be here, it is huge. To be here on our back doorstep, it makes sense.

“Once we get a base, it will be even greater.”

“Although it is a national event, we rekindle relationships here,” said Laurie.

“This is a good starting point for family to come back if they have no connection,” said Ariane.

And even though the club only has two waka, they go into the pool to be used by the visitors.

“That’s what we do as a whānau, we share things,” said Laurie.

Nearly 2700 paddlers from 63 clubs from as north as Kaitaia and south to Christchurch along with 17 corporate teams and several international paddlers from Fiji are involved in the championships.

More than 10,000 spectators were expected throughout the seven days. The championships got $20,000 from the Waipā District Promotions Fund.

Waka Ama chief executive Lara Collins said numbers are down because of the Covid interruptions but she expects the sport to bounce back.

“Waka Ama is a sport like no other, with its inclusive nature bringing together paddlers of all ages and backgrounds with their whānau,” she said.

The youngest paddler is five-year-old Ava Keane-Tulepu of Porirua and the oldest is Whanganui’s Arthur Wilson who is 81.

“It may be the only sport where grandparents, mums, dads and their kids can come together and compete at an event.

“That’s what makes it so special and unique – the racing is competitive, but the vibe is what draws the crowds and whānau,” said Lara.

Saturday is finals’ day with clubs competing for national honours in single, six and 12-paddler teams over distances of 250m, 500m, 1000m and 1500m. Spectators are also in for added excitement as teams competing in the six-paddler 1000m and 1500m classes must navigate their way through hairpin turns at the 250m mark.

The inaugural Waka Ama Sprint Nationals were held in 1990 at Lake Karāpiro. There were 17 clubs and 43 teams taking part compared to the 63 clubs and 15 corporate teams participating this year. Sixty per cent of the 2700 paddlers participating are female. 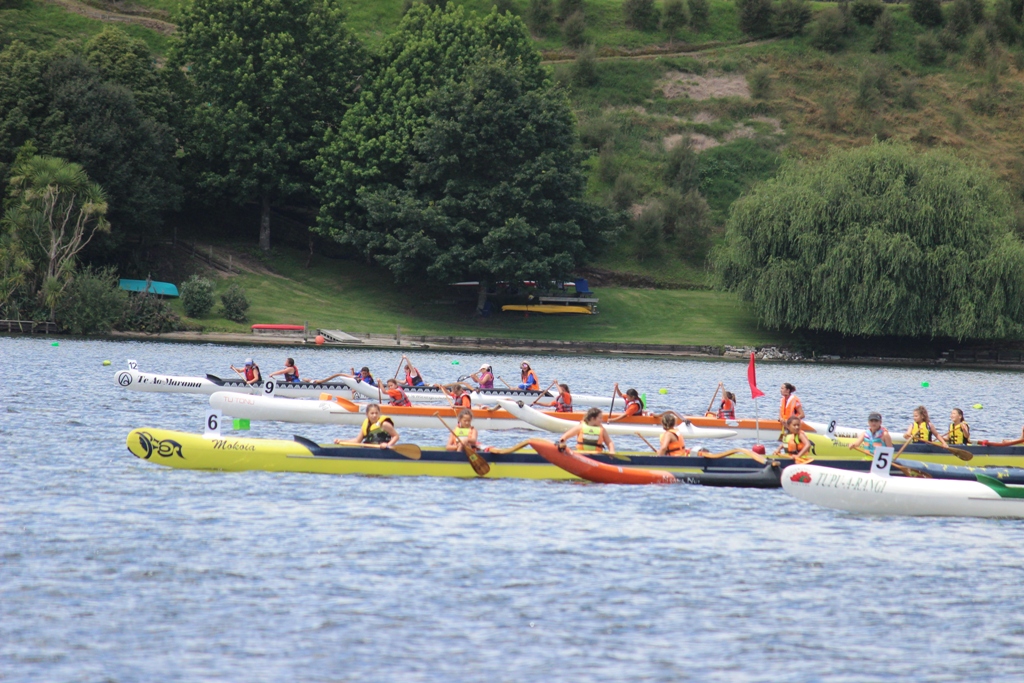 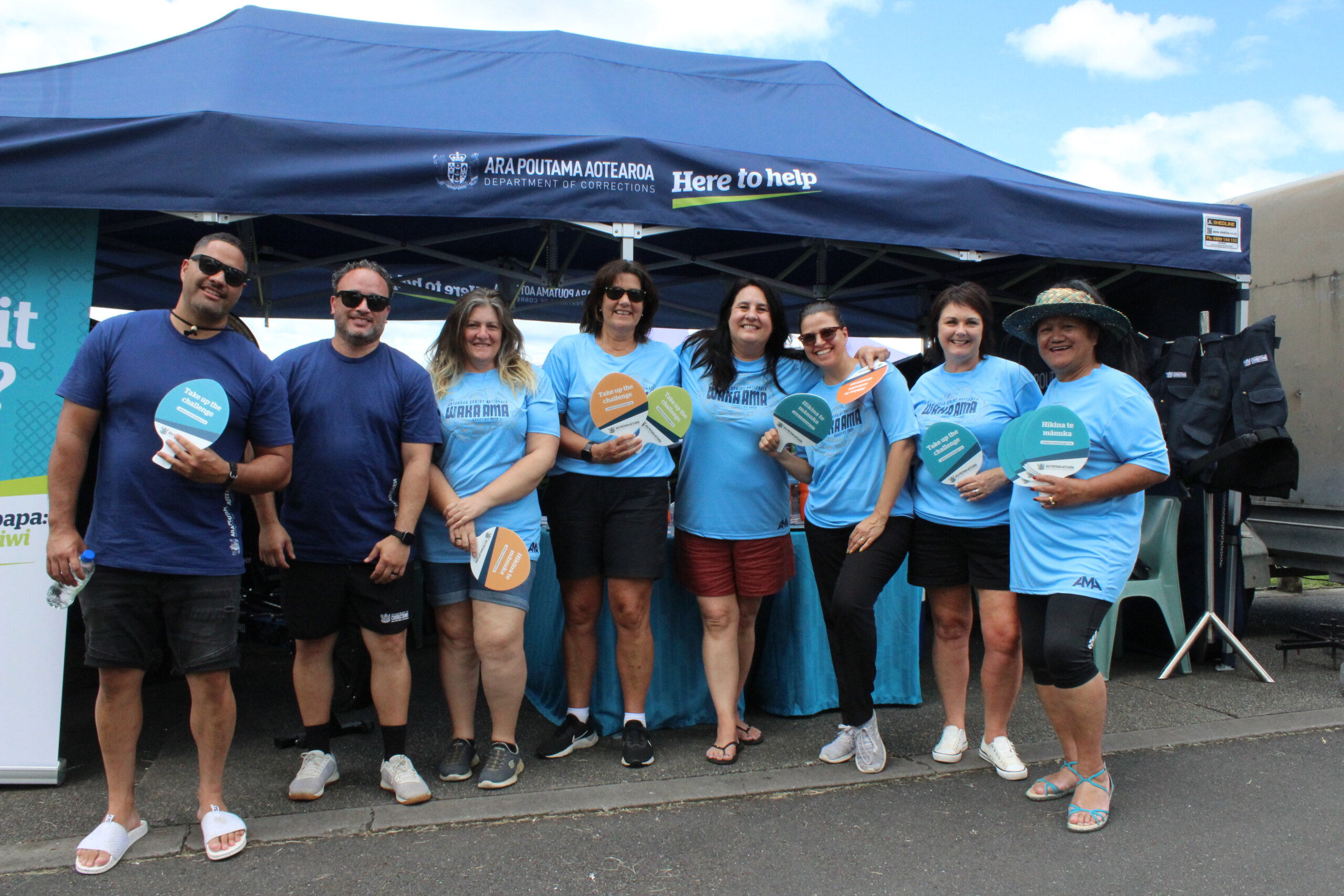 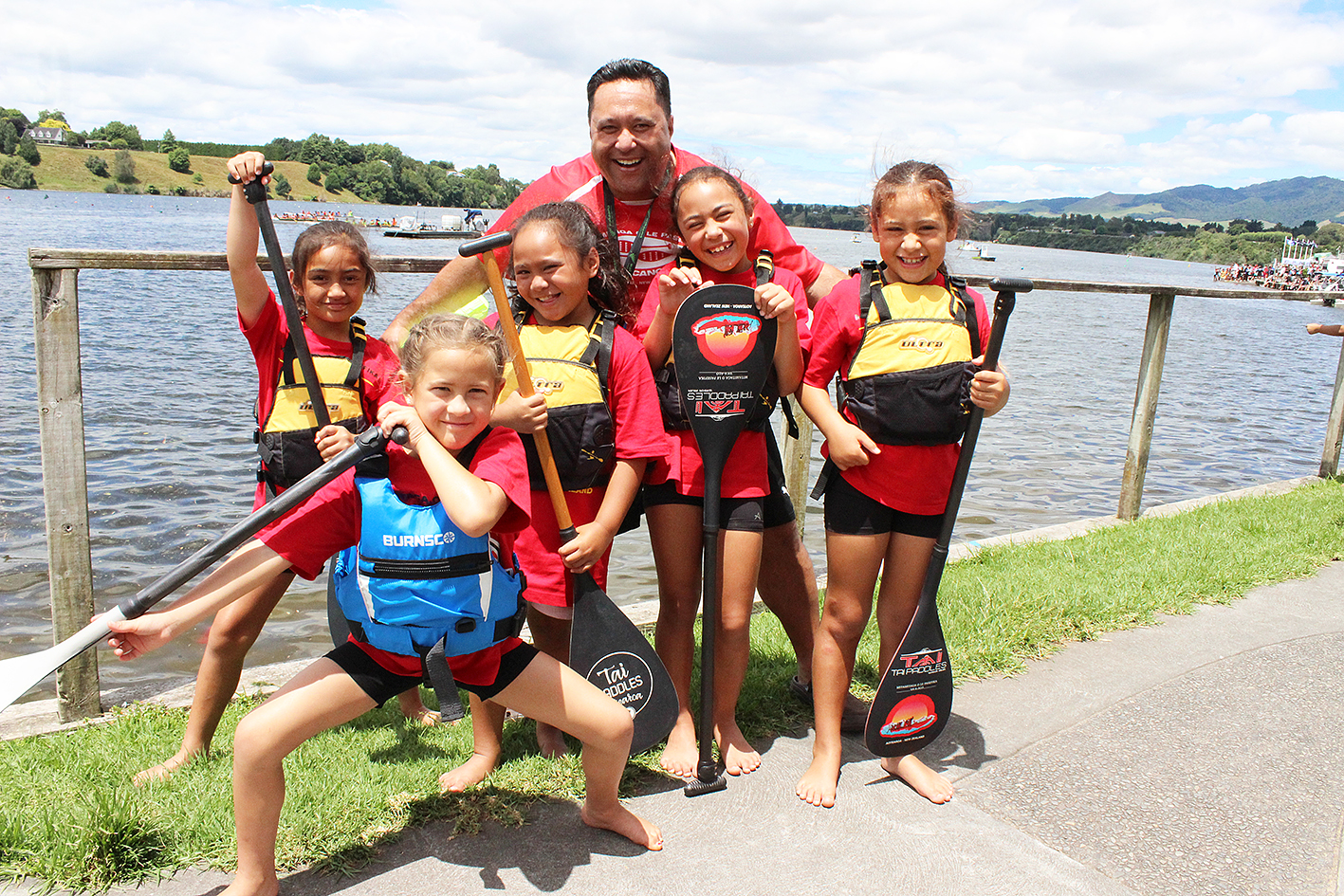 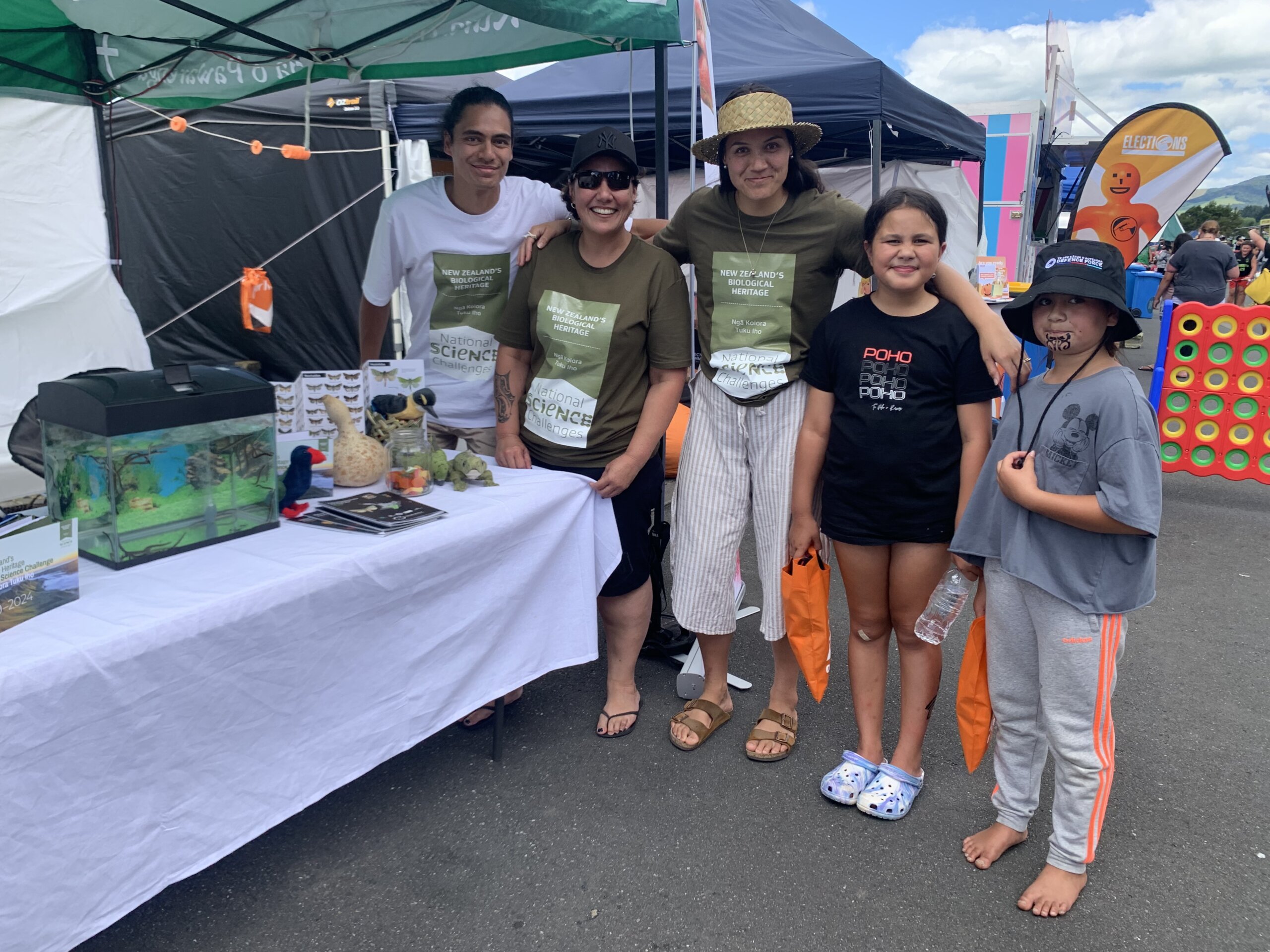 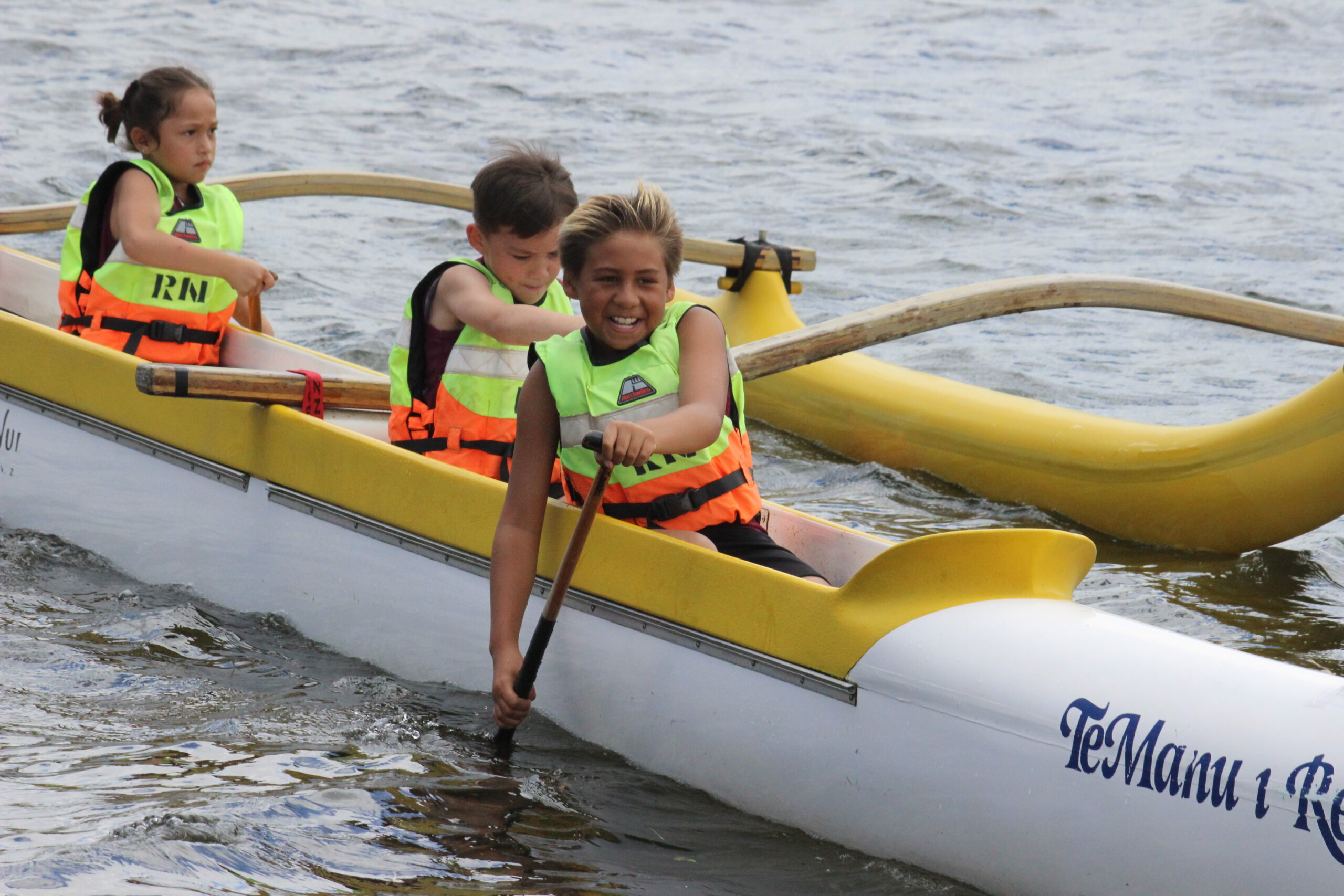 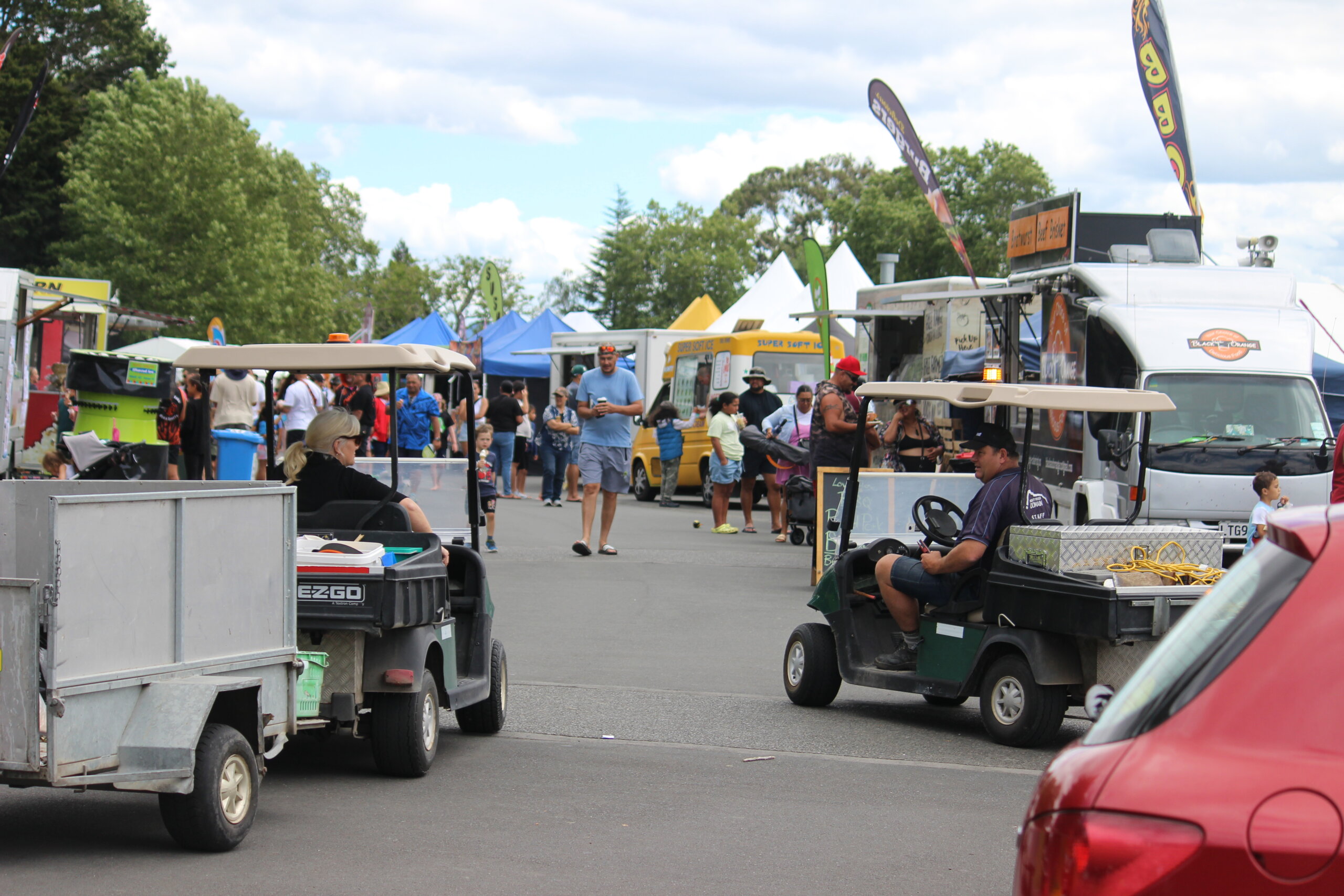 Busy day for Mighty River Domain site manager Liz Stolwyk, left, and husband Andrew Reymer, fresh off a flight from Europe, on day one at the Waka Ama Sprint Nationals on Lake Karāpiro. 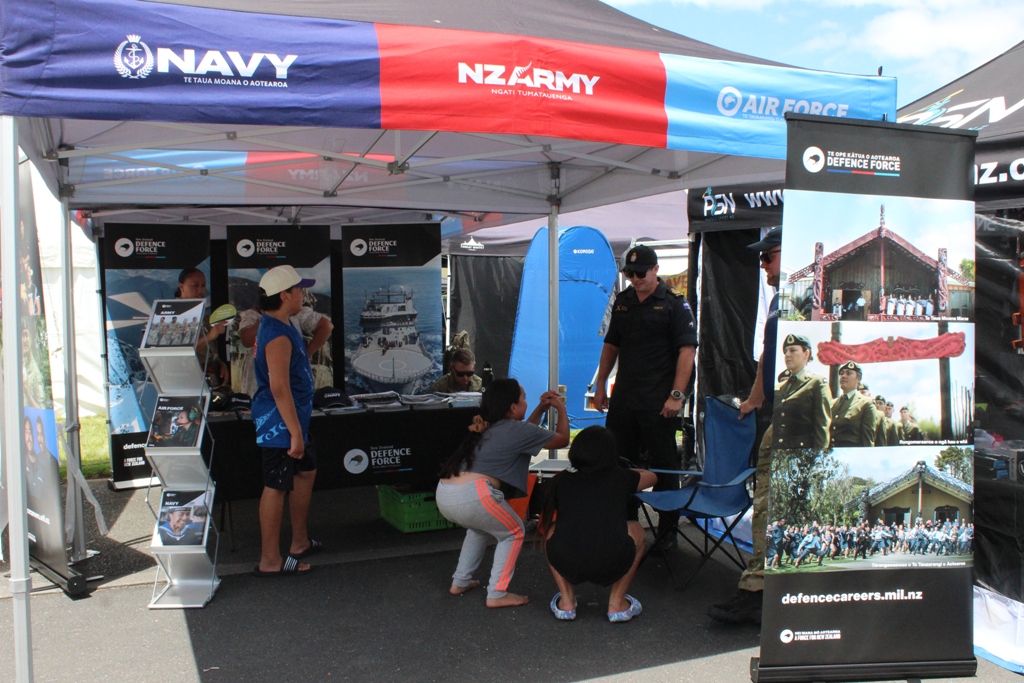 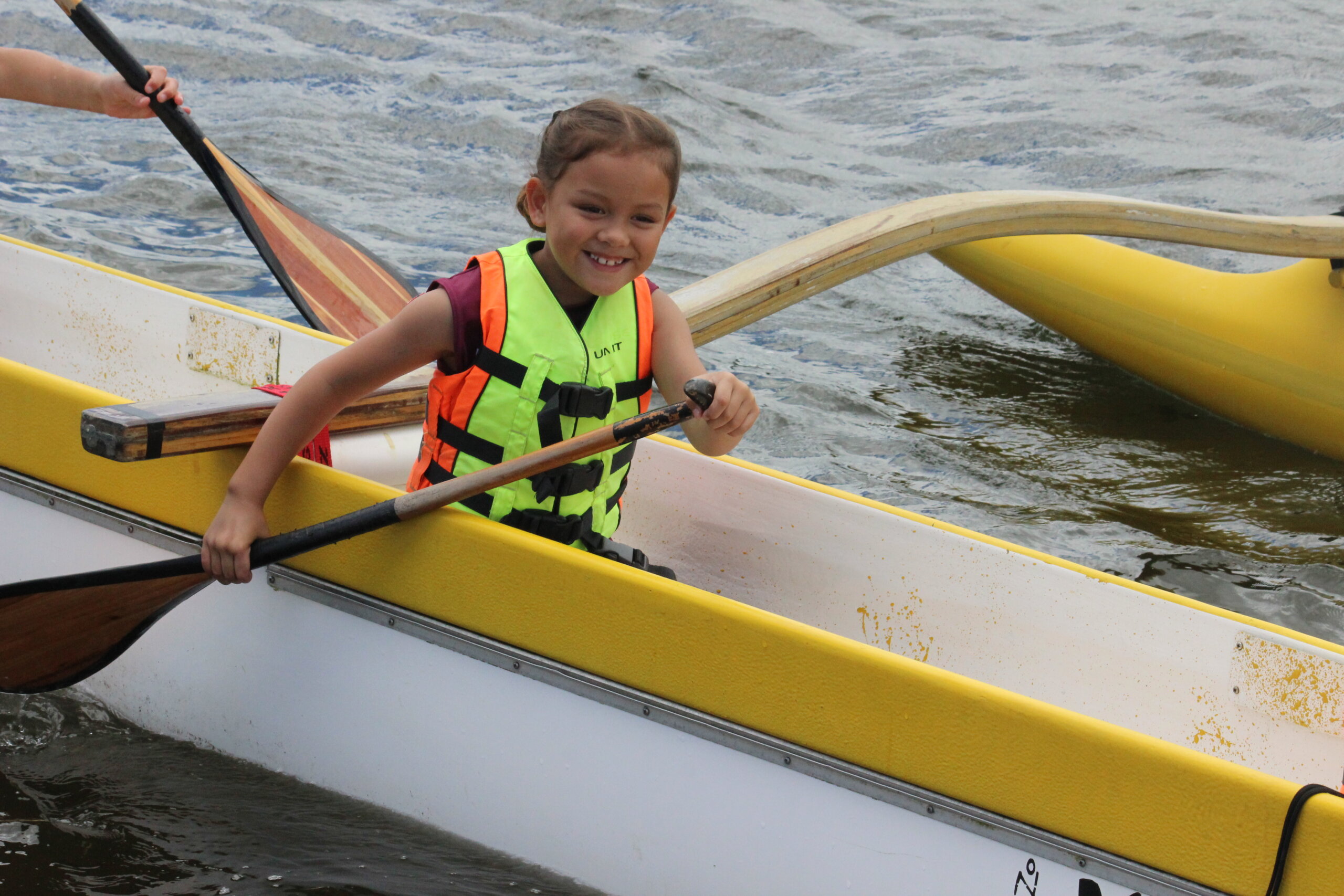 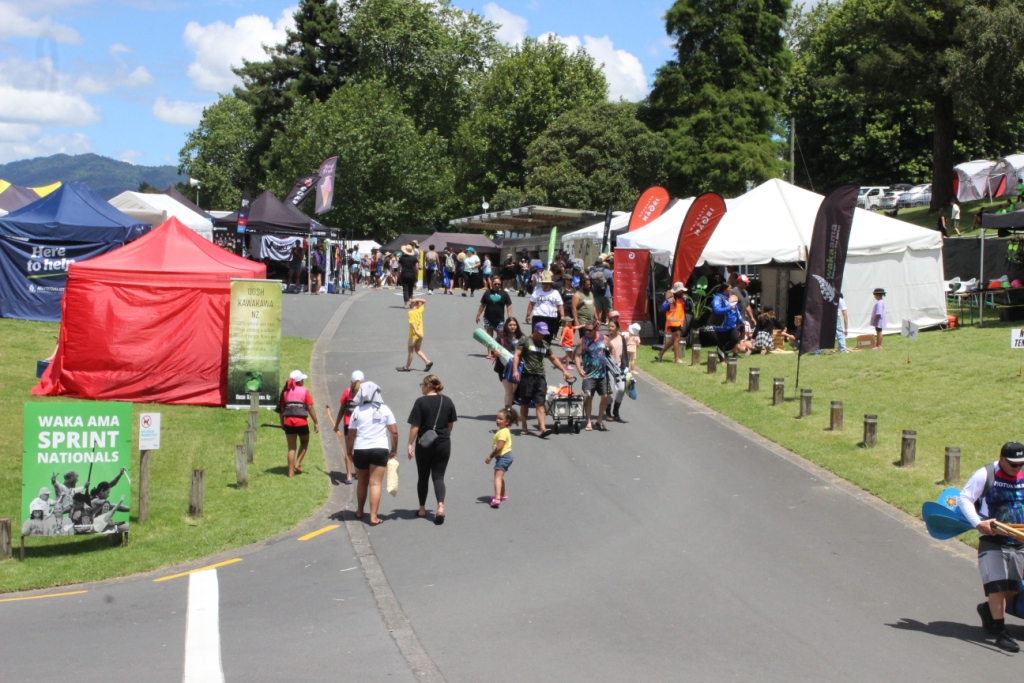 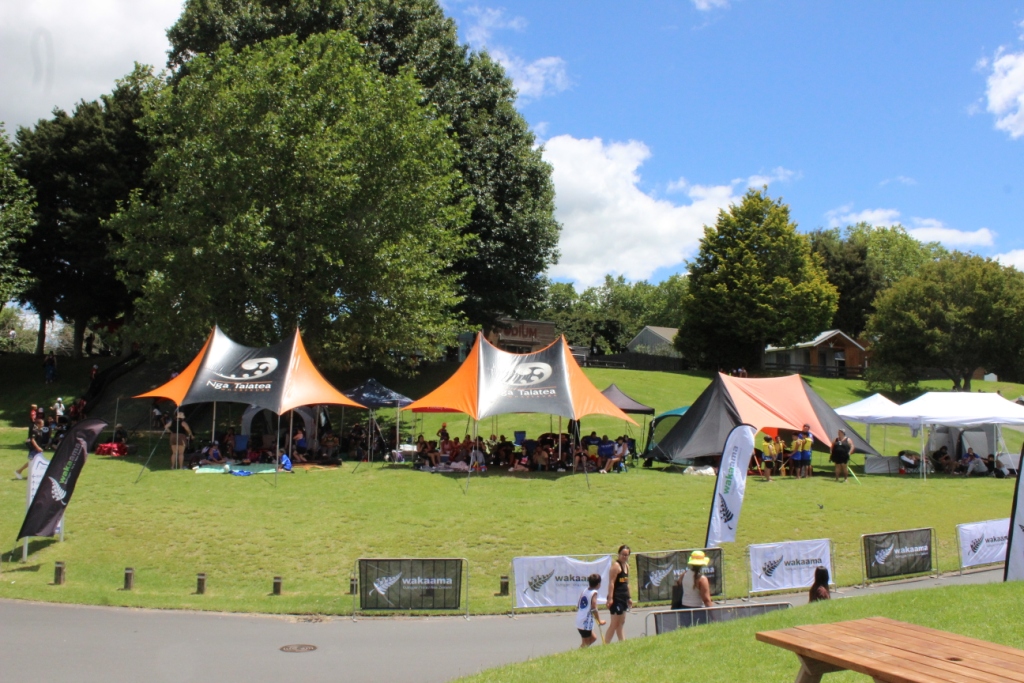 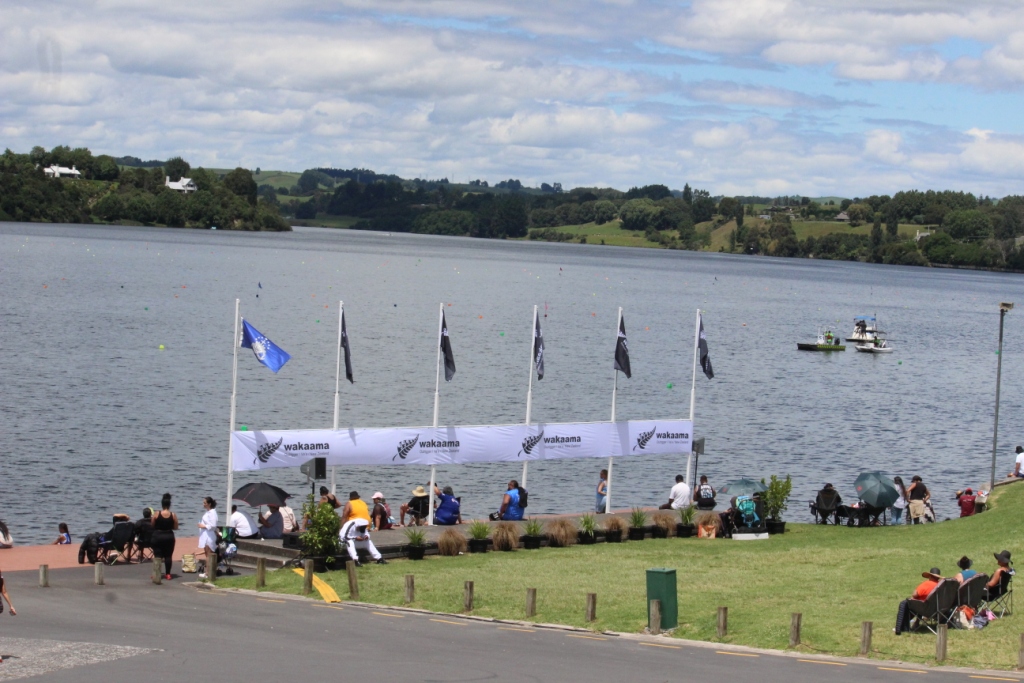 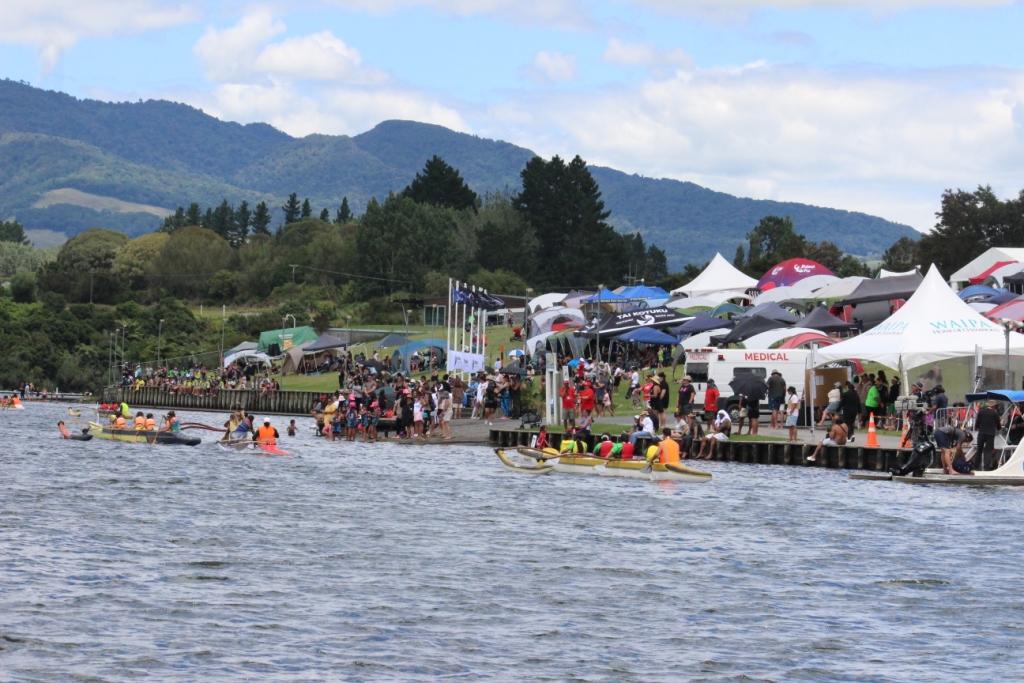 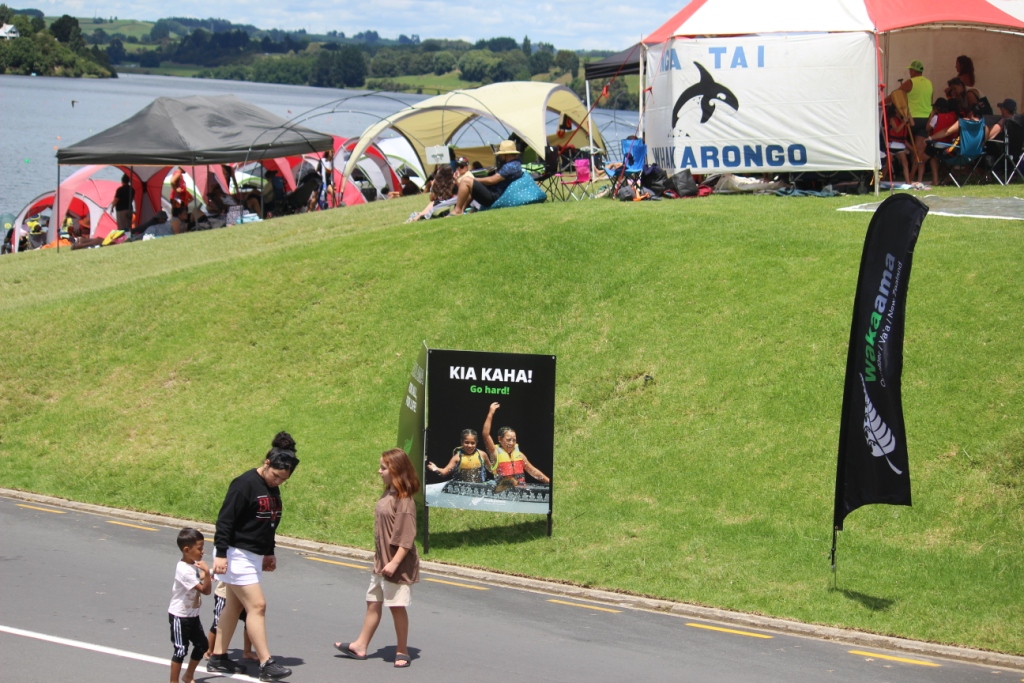