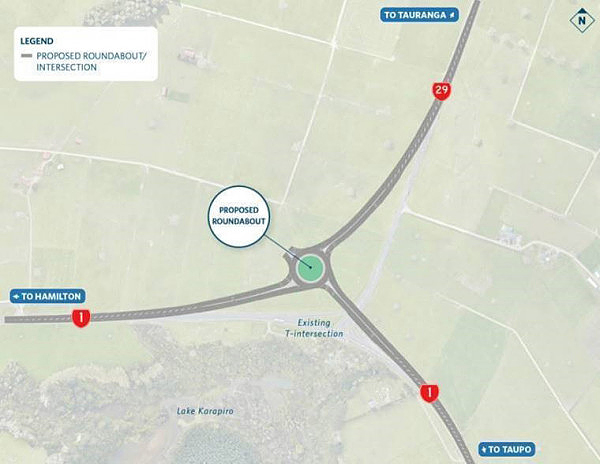 The proposed roundabout at Piarere.

Waka Kotahi’s plans for the Piarere intersection of State Highways 1 and 29 remain in limbo four months after the Environment Court heard applications and opposition.

The roading agency believes a new roundabout about 1km from the present intersection is the best way to end the southern stretch of the Waikato Expressway when it is extended 16km from Karāpiro.

The roundabout plan was costed at $40 million a year ago, when Waka Kotahi reported most of the 18 submissions on the plan supported it. The expressway extension was costed at $635 million at the same time. The Piarere intersection is one of the worst in the region for crashes.

The News has sought information from the court on the hearing but told no more than a decision will be made in “due course”.

Waka Kotahi says a start date for construction will depend on the timing and outcome of the Court’s decision and land acquisition processes.

It expects the project as it has planned will be funded as part of the New Zealand Upgrade Programme and will take two years to complete.

The court is also considering an alternative proposal from Cambridge resident John Hansen, who argues a roundabout is a short-sighted option – and the best solution is a flyover to enable traffic to turn right off the road from Tauranga and head north. He also thinks the traffic figures supporting the plan are out of date.

The Piarere intersection is the problem child of the road between Hamilton – and the inland port at Ruakura – and the port of Tauranga and it is not unusual to see northbound traffic backed up for hundreds of metres, if not a couple of kilometres.

Hansen argues a roundabout will not remove traffic congestion in the way a flyover would.

Further, he suggests it will still be difficult for traffic from SH29 to turn right. He says that’s because of the relatively low number of vehicles turning onto SH29 from the south.

He calls it an “unequal equation.”

Hansen told the Environment Court his plan would provide the ability for a better link to future expressway work, there would be less interference to neighbouring farming activities and there was a natural elevation for an expressway underpass.

The plan is one of two suggested on the Cambridge to Piarere stretch of SH1 which The News has looked at.

The other is for additional off and onramps at the southern interchange at Cambridge which supporters say would significantly reduce central business district congestion as commuter traffic heads from the Expressway to Leamington.

That proposal is also expected to get more airplay this year.