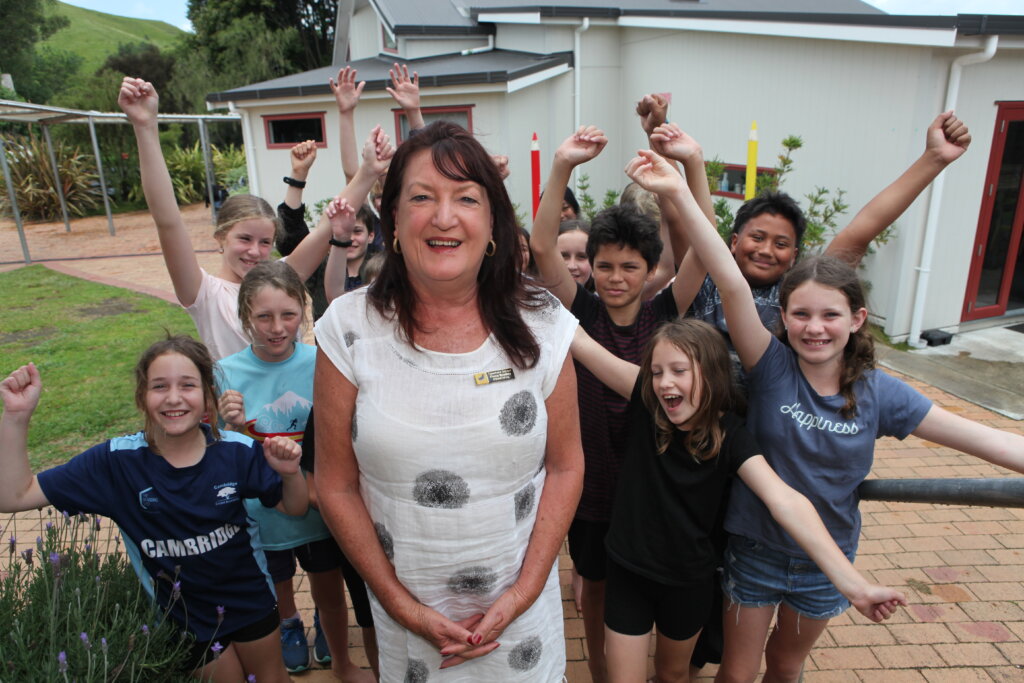 “That sounds trite but it’s true. They fill your bucket every single day. Watching even the tiniest steps they take and the success and the glow on their faces; I will miss that so much.”

She will also miss her “incredible” colleagues, who “work so tirelessly for every child”.

“And mostly, I’ll miss the music,” she said. “It’s a massive part of our lives here at Tauwhare.”

Her own life is “full of music, singing and acting” and her school has been too.

“We do a production every two years and there is never a child as a tree, never; every child is involved in a meaningful way,” she said.

“I take a microphone around assembly every week and get the kids to sing. It can be a bit scary for the little ones at first, but it doesn’t take them long to get used to it. Getting up and performing is so good for kids, especially these days when everything is about communication. If you’re doing speeches, drama, poetry and singing right from age five it just takes that fear away.”

“Technology was always one of my passions and I can still remember begging, literally begging, the PTA to let me have one computer,” she said. “It was one of those big old Commodore 64s and I so wanted it. I am a bit of an actress so I even let a few little tears slip about my passion for this technology and it being the way of the future.”

Despite worries about the impacts on children’s handwriting, the board acquiesced and Fiona “never looked back”, eventually winning a $93,000 grant to flood the school with smart boards and surround sound.

“We had busloads of teachers and principals coming out to look at all our technology,” she said.

Fiona trained at Hamilton teacher’s college in 1975 and arrived at Tauwhare School as a relief teacher in 1989. She took a full time role in 1990 and was appointed principal in 2002, following the death of the much loved principal of the time, Anne Currie.

Determined to grow the roll, she set about raising the school’s profile by “putting lots of stories in the local paper”.

“The school was 65 kids and three classrooms back then,” Fiona said. “Now we sit around 150 and we have seven classrooms.”

Under her leadership, the school was selected to host an OECD education delegation one year, which remains a career highlight.

“Back in the day New Zealand was doing so well in education the OECD wanted to see a mixture of high achieving city and country schools, so the ministry brought them out here,” she said. “That was hugely exciting and a big moment for us all. I was just really proud of New Zealand for being so respected for its educational standards and I was proud that Tauwhare was part of that.”

Another highlight was leading the Hillcrest Kahui Ako from 2017-2021. The group includes 12 schools, ranging from pre-school to high school, which work together to improve student outcomes.

In addition to her many successes, Fiona is likely to be remembered for her love of high heeled shoes.

“I’ve always worn high heels,” she said. “I skip in high heels, I jump on the trampoline in high heels; there’s nothing I can’t do in my heels. It makes me taller than the kids. It gives me a bit of stature.”

And why not, when you’re in your early twenties?

“Ever since I started teaching I’ve been 21 and a half,” Fiona said. “But this story has blown it, big time.”

Despite working in the same place for more than three decades, she has never been bored.

“I’ve always worn high heels,” she said. “I skip in high heels, I jump on the trampoline in high heels; there’s nothing I can’t do in my heels. It makes me taller than the kids. It gives me a bit of stature.”

“Every day is different,” she said. “And that can be hugely challenging but it also can be hugely exciting, which is why you don’t get bored. I’ve never been bored, ever. I’m always meeting a new challenge or a new problem or a new opportunity.”

Now, as the curtain comes down on her teaching career, Fiona is looking forward to complete freedom.

“Probably for the first time in my life I don’t have a plan and I don’t want one,” she said.

“My kids are taking bets, they reckon I’ll last maybe the holidays, because I’ve always worked and I don’t like not working. I told them I was going to get a mindless job but they said ‘ah, no, you’d have to own the company mum’. But I’m actually going to leave here with nothing planned. It’s scary as hell.”

Hailing from a large Irish family, she is particularly looking forward travelling and spending time with her whanau.

Tauwhare School’s new principal is Chris May, who comes from Tauhei Combined School near Morrinsville.