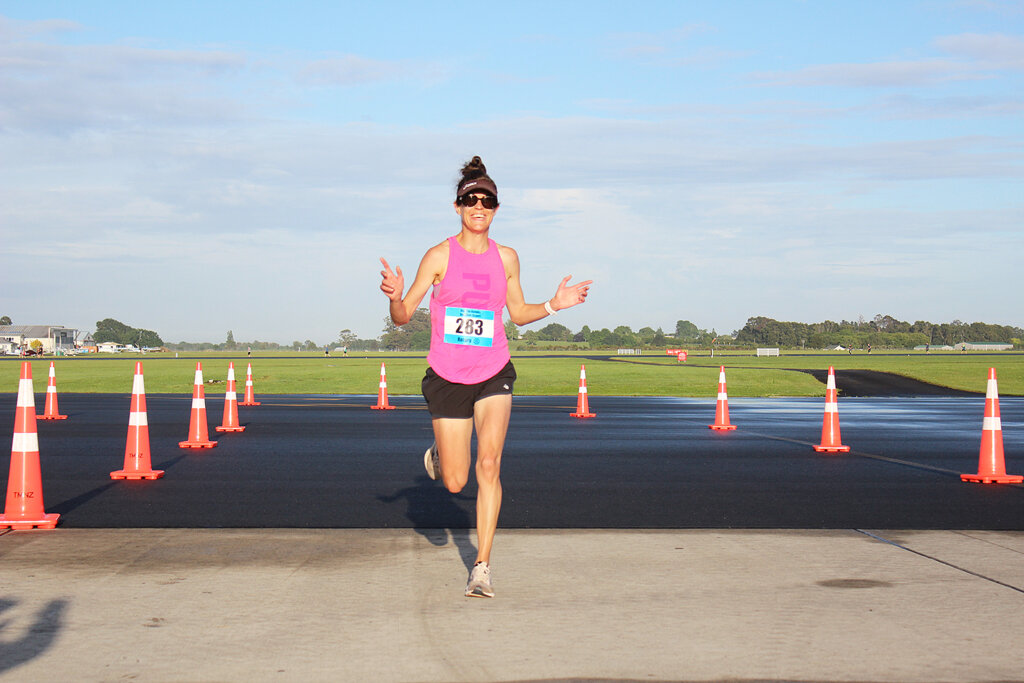 Rowan Torckler from Hamilton was the second runner home. 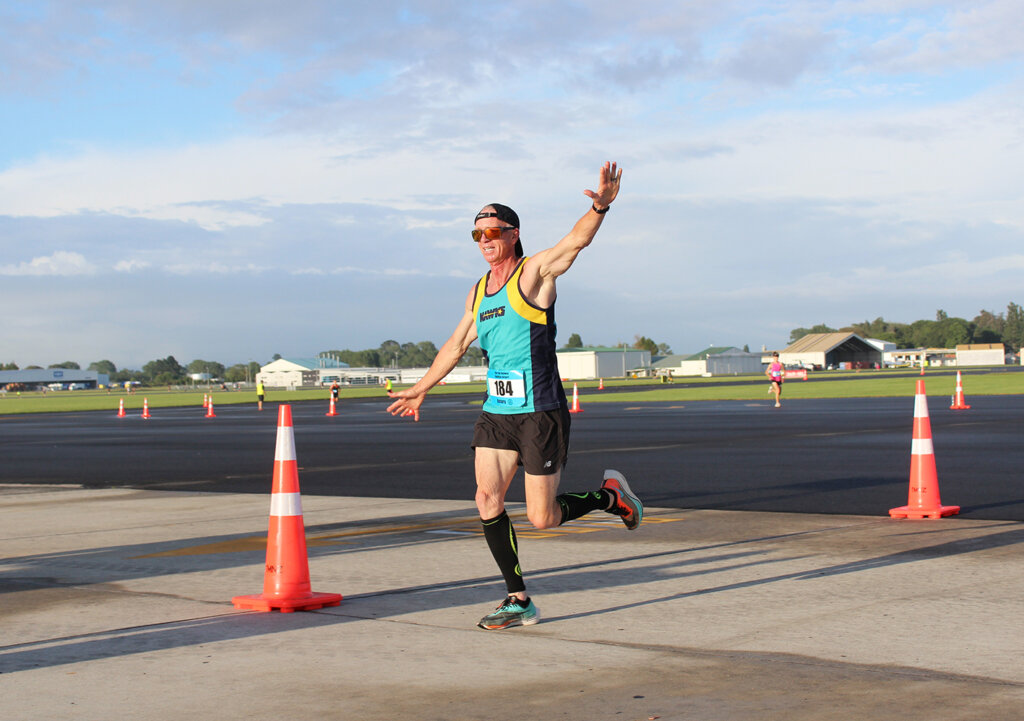 Hamilton’s Mark Cornage flew home as the first runner back. 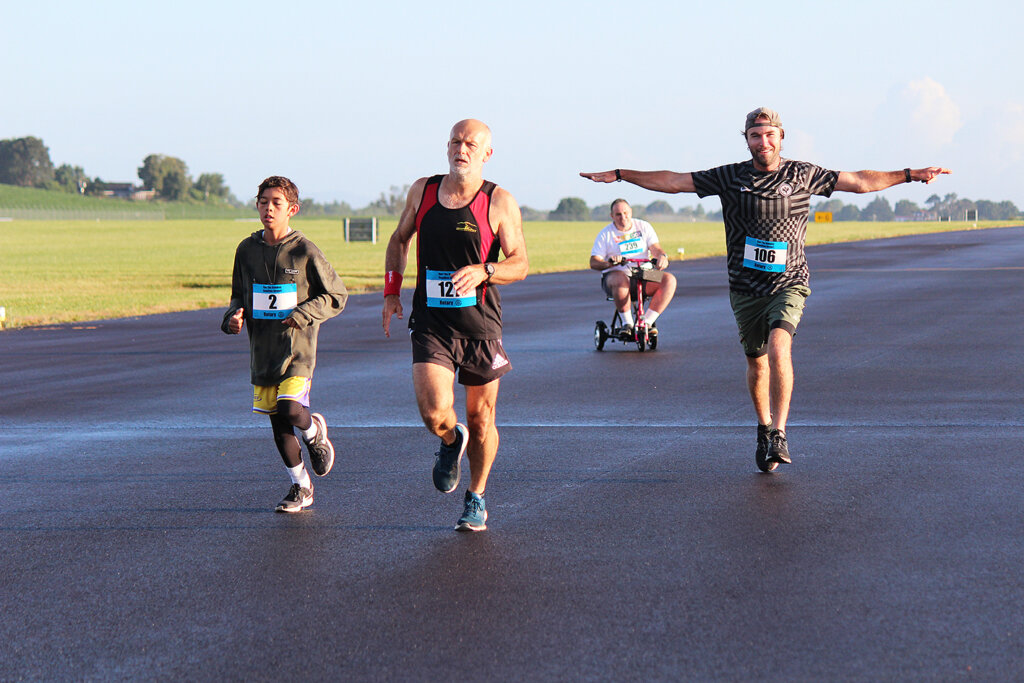 The event catered for everyone – including 52-year-old Matthew Hall (centre) who was the third runner home. 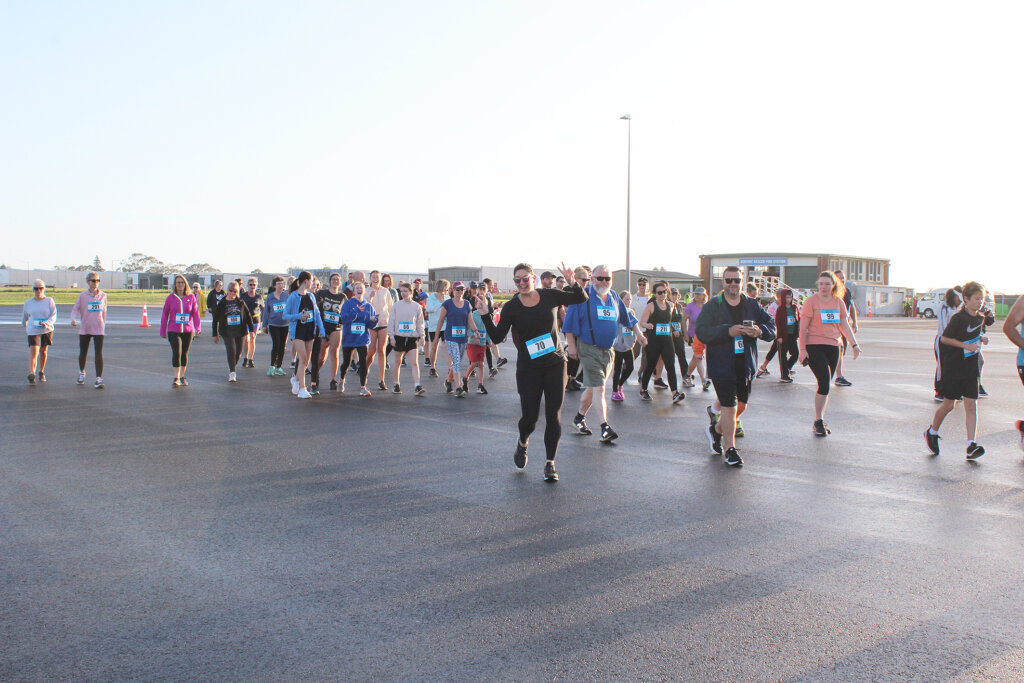 It was slow and steady for much of the field taking on the 5km course. 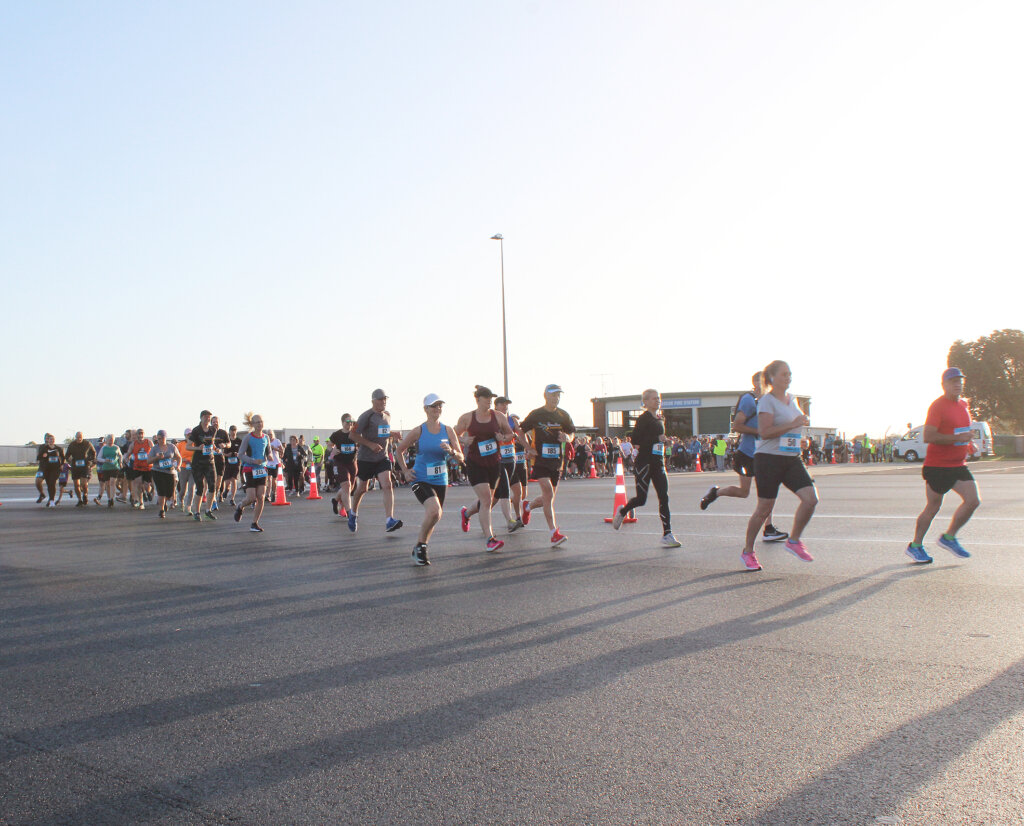 And they’re off – runners, walkers and cyclists at the beginning of the runway event on Sunday. 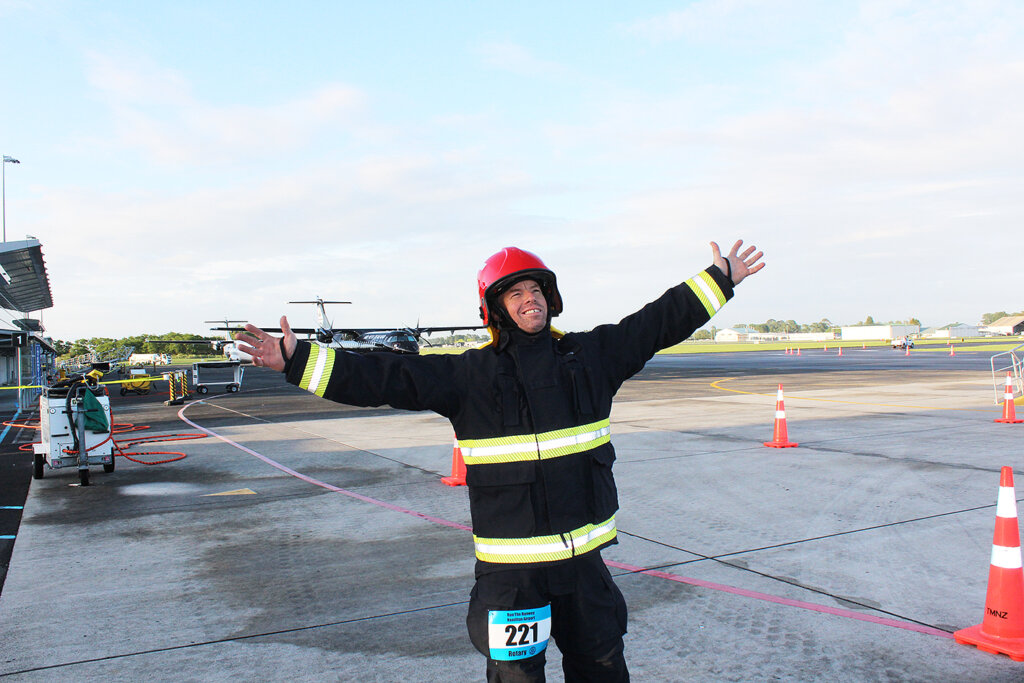 Cambridge firefighter Kelly Remkes, who is based at the airport, completed the event in his “work clothes”. 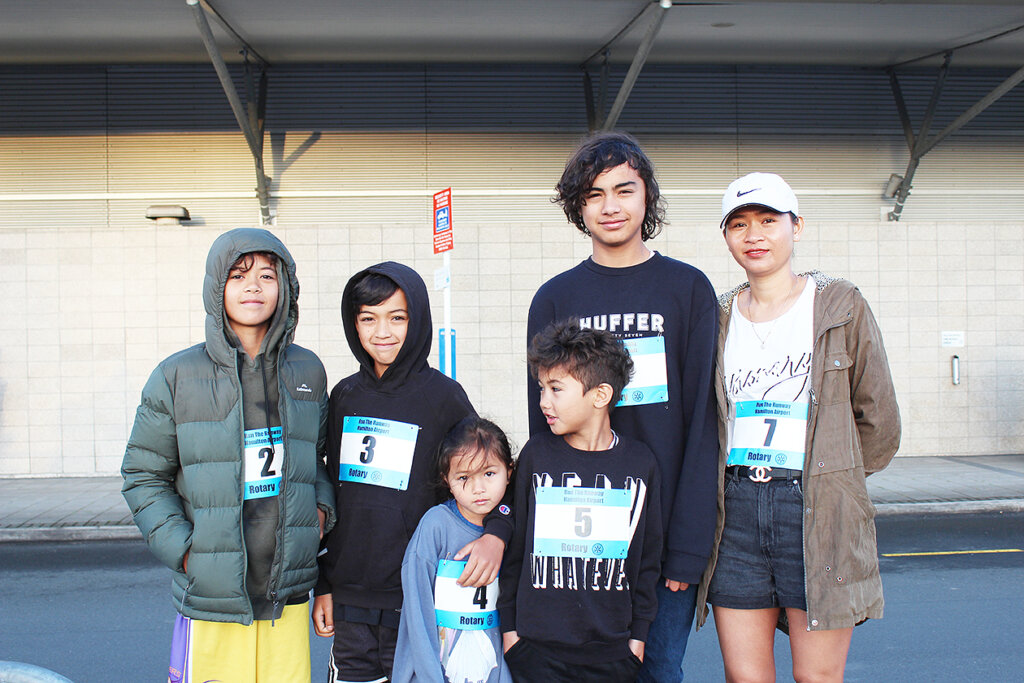 Gordonton’s Jee Grayson was among the early birds to register her children, from left, Sam, 12, Nathan, 10, Emily 4, Joseph 7 and David, 13. 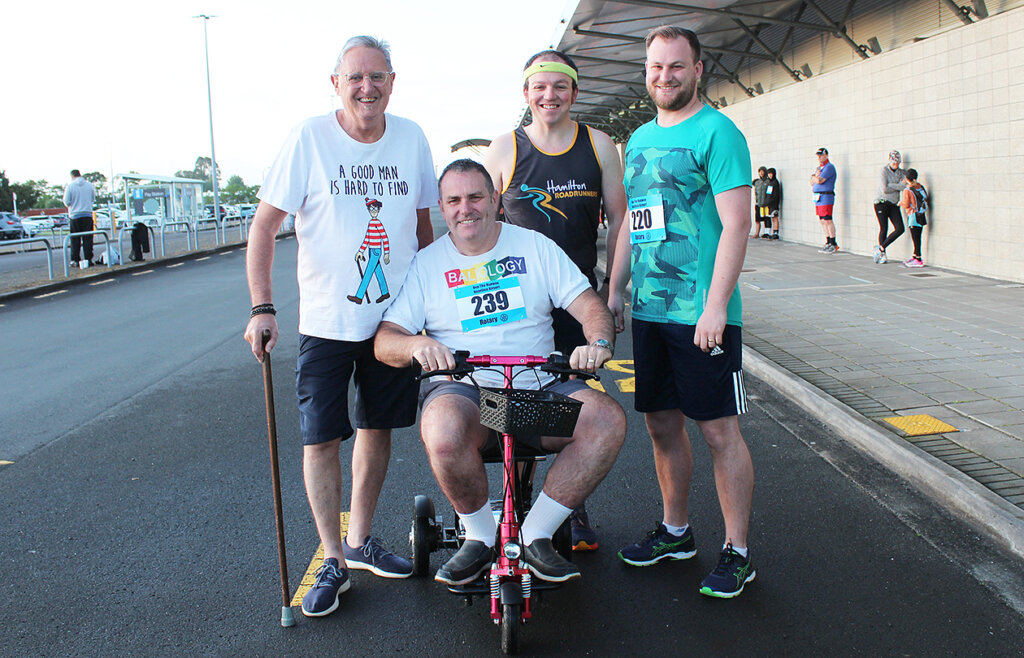 Ready for the run – from left, David Natzke, Keith Small and Aaron Kearney of Cambridge with Hamilton’s Ryan Page. 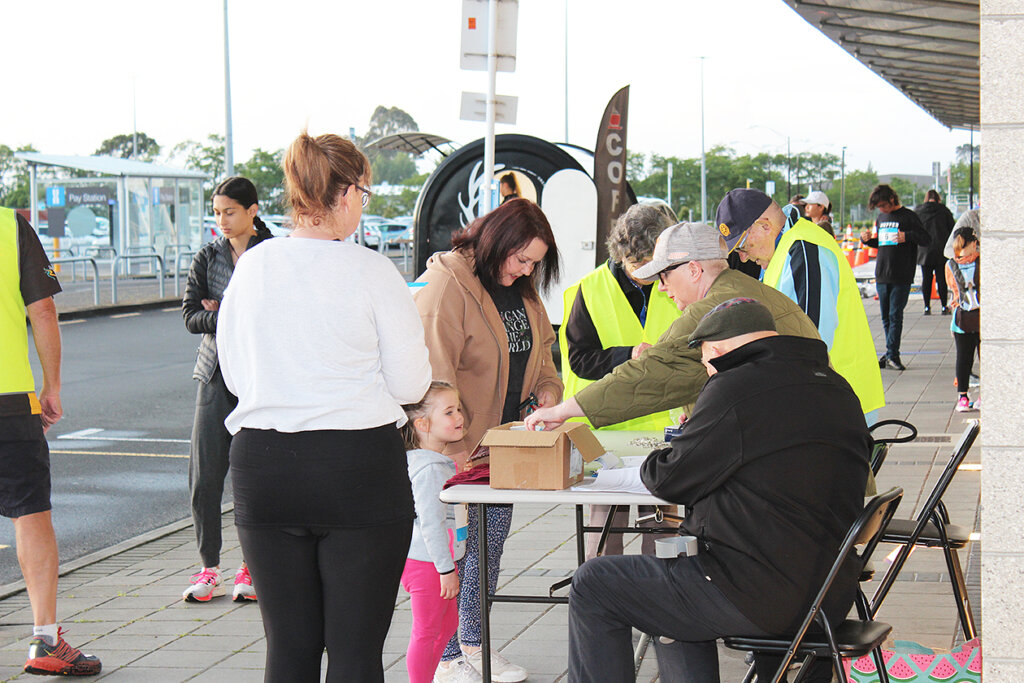 The Rotary organised event attracted entries from throughout the districts – and Rotarians from much further afield.

Hamilton scored a quinella in the run to the finish line with first time starters Mark Cornage (19m 26s) and Rowan Torckler (19m 39s) first back ahead of Cambridge’s Matthew Hall.

The day produced a sunny morning with light cloud – in stark contract to the thunder and lightning the night before and the heavy rain which fell later in the morning.

Organiser Mike Cahill was delighted with the success of the event which was put back to November from the original March day because of the Covid traffic light restrictions.

The next one will staged on March 19, and the success of the first two has encouraged organisers to think bigger.

Cahill said the organisation is carried out by six Hamilton based Rotary clubs – and he is keen to see Cambridge Rotarians involved in future. He said the airport management had also embraced the event and were interested in seeing it develop into a bigger family orientated day.

Sunday’s event was very much a social gathering as entrants covered the 5km distance on wheels and on feet, most at a leisurely pace, but many showing a notable level of fitness.

Kelly Remkes, a firefighter based at the airport, completed the distance in fire-fighting gear – including helmet.

Heather and Richard Brand were first home on bikes, getting a late reminder from organisers to go across through the “official” finish line.

Cahill said the day would raise about $14,000 to be split evenly between two organisations.

One is the Kids in Need Waikato  charity inspired by Linda and Graeme Roil of Cambridge, the other is a major project in Kathmandu. Rotary is supporting a $2 million mission to build a children’s hospice. The existing hospice has just eight beds and cannot meet needs. The new hospice will also have an adjacent training centre for doctors, nurses and health care workers.