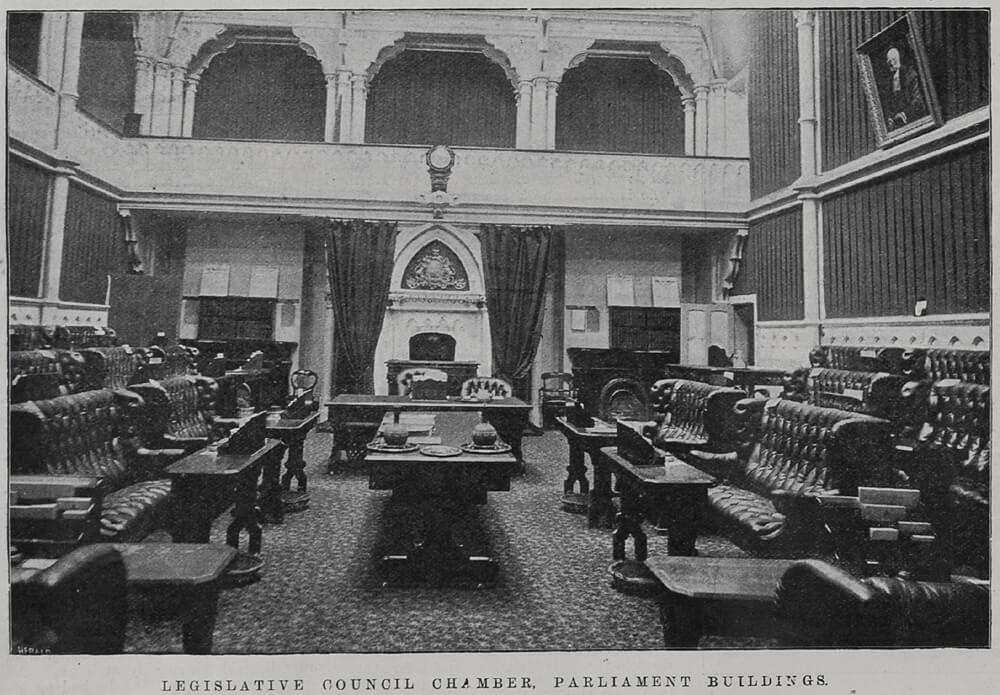 Photograph of the original New Zealand Legislative Council chamber. Taken from the supplement to the Auckland Weekly News 21 July 1899, page 4

The mid-term federal elections taking place in the USA during November bring to mind the use – or perhaps misuse – of bicameral parliaments. That is where there are two houses, often described as upper and lower, or perhaps as Senate and House. They are clearly prevalent in the US with all the members of both houses elected (but not all at the same time) and with different longevity of term.

Our nearest bicameral neighbour is Australia – using the term Senate for the upper chamber. Canada too has one and the UK has existed under such a system for centuries although Prime Minister Tony Blair took the axe to the House of Lords greatly pruning it in quantity and perhaps, by default, also improving the quality.

New Zealand struggled with a bicameral system for just under 100 years with mixed success and equally mixed appointment systems.

Initially commencing with 10 members – all appointed technically by the Governor (later Governor General) but on the advice of the Prime Minister of the day.

By the end of the 1940’s it was clear that it was, as a group, ineffective – rarely challenging the parliamentary acts that emerged from the lower house. Indeed, it appears that a prime qualification was getting on with the Prime Minister of the day and possessing a rubber stamp.  Māori were represented from an early stage – the last one being that fine East Coast leader Sir Apirana Ngata who was appointed in 1950 but ill-health prohibited him taking up the role. That was sad, as I am sure he would have improved both the membership and the debate. In 1950 the ruling National Party stacked the Council with a group whose sole intent was to vote it out of office.

It begs the question as to the efficacy of such an organisation should it be considered for reawakening in this country. Are we better served by a robust and well-balanced select committee structure who tackle proposed new and amended legislation after the First Reading? I am embroiled in several appearances before such a committee on behalf of residents of retirement villages and must admit that I have been treated courteously, professionally and with absolutely no hindrance on any point that I desire to implant in the minds of the committee members. Generally, the questions asked have been well put, clear and indicating a grasp of the subject. I believe that these people provide a balancing viewpoint and depth of subject interest far better than would the existence of an Upper House.

Which brings us back to whatever is going to emerge in the land of Uncle Sam. The spectre or ghost of the most recently departed President looms large over the proceedings. Members of both chambers are tackling the behaviour at the Capitol on January 6, 2020. And they are clearly of a mind as to who orchestrated it. Yet approximately half the American voting population will align themselves with Sergeant Schultz whose key phrase was ‘I see nothing, nothing’.

What is about to emerge in the USA over the next couple of weeks will be interesting. Whoever assumes the power supremacy in that country,  the whole world must suffer the consequences.