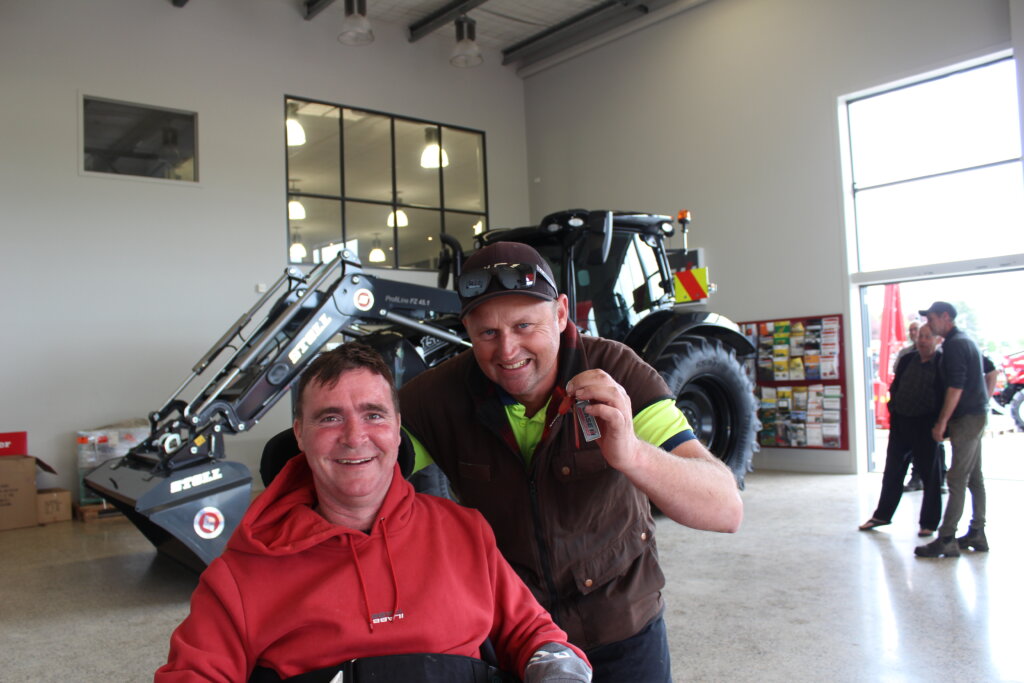 Hedley Edwards and Jeff Weake, who had the keys to his new big black tractor.

Hedley Edwards jokingly refers to it as a weapon.

But a couple of months later Edwards was in Middlemore Hospital, Auckland, rather than at work – he had been critically injured when a tree fell on the ute he was driving on Raynes Rd Rukuhia.

The crash left him paralysed, and doctors were prepared to give bad news even if he survived.

He did – and defied a series of odds to be back at his old work this week when Weake came to collect the keys for his “weapon”.

Staff gathered to catch up with their former workmate, and dad of three, who enjoyed some humorous banter in between posing for pictures.

And he takes a philosophical view on life.

Edwards said the prognosis for him was consistently bad after he was taken to hospital in an induced coma.

He’s managed to beat the odds on all four of those counts – “but they don’t know how much more recovery I will make”.

He said the first 18 months are significant in terms of recovery and involves intensive work.

There has been some community help too. More than $50,000 was raised in a month before Christmas last year via a social media appeal. His partner, Samantha Solomon, said at the time she agreed to the appeal “once I got my head around the future and everything we would end up needing”.

Edwards was delighted to see the “weapon” when he made his second return visit to his former workplace this week.

The Case IH Maxxum Active Drive 8 was custom ordered with a black paint finish, one of the reasons it took time to arrive in the showroom.

Jeff Weake was pleased too – and that’s no surprise. Climb up three rungs on the ladder to get into the cab and the expression on top of the world comes to mind.

It’s not quite the cockpit of a large aircraft, but you get the idea.

Ahead of driving it back to his Whatawhata farm, Weake indicated that with the bridge to bridge water ski race, from Hamilton Taupiri return  coming up this weekend, he would have it out to tow a boat.

Oh, and he plans to take Hedley out to Raglan for some fishing.