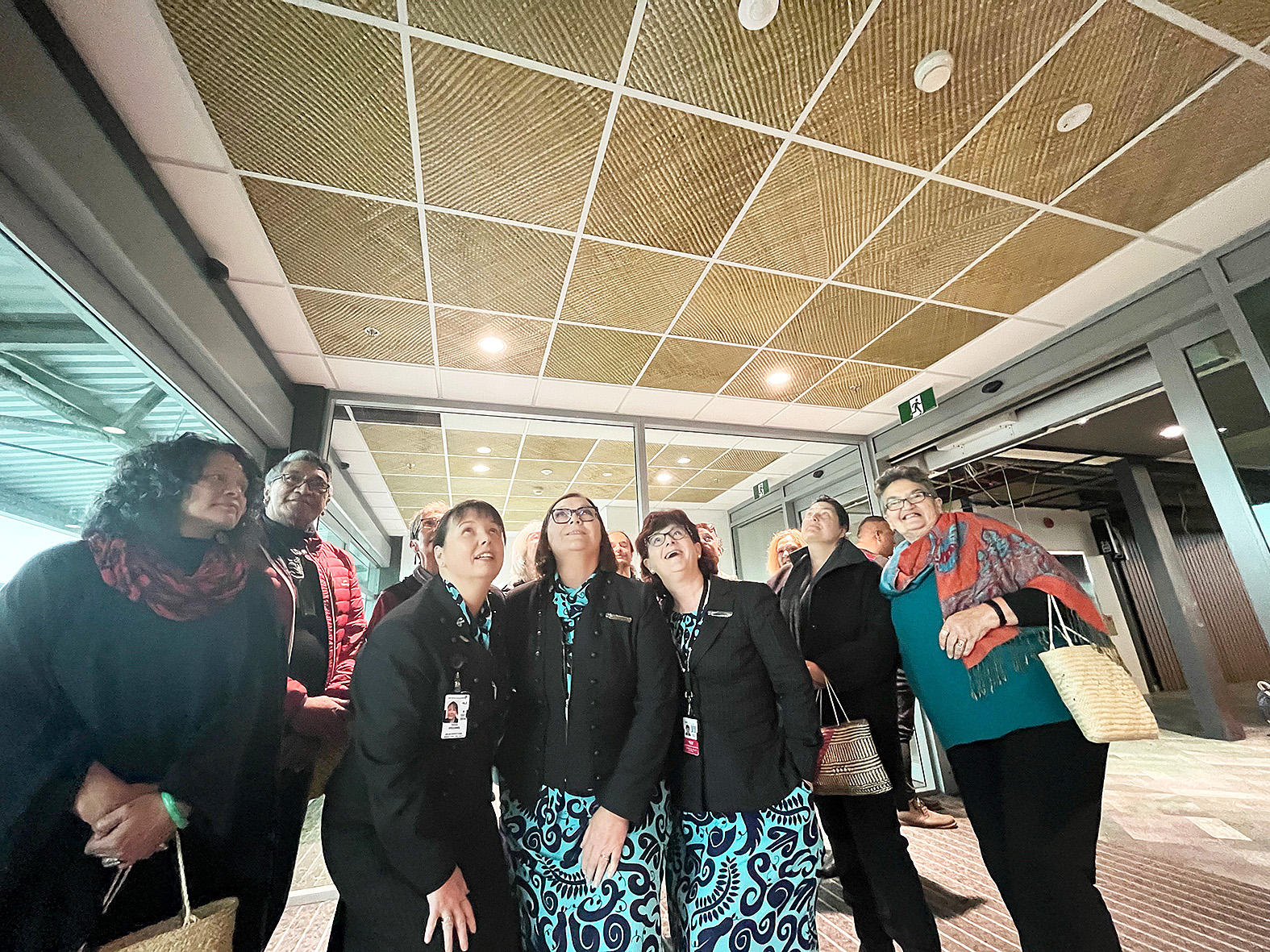 The placement of flax weaved ceiling panels – raranga –  at the Hamilton Airport departure gates are designed to calm anxious travellers before they board their airplane. And the Air NZ Hamilton Airport team, from left, Maree Higgins, Linda McCann and Hilary Crow, with Ngati Haua representatives, checked them out during last week’s unveiling. Photo: Jason Dawson

The blessing at Hamilton Airport.

Hamilton Airport has unveiled a $15 million passenger terminal refurbishment to welcome visitors to the Mighty Waikato.

The upgraded terminal was unveiled to the public today after 16 months of work. It involved structural strengthening, a plush new departure area, brand new furniture, fittings and and flooring, more dedicated work spaces for travellers and a modern, new colour scheme that reflects the natural colour pallet of the Waikato region.

Te Hira has infused the terminal ceiling and carpet design with cultural references to Waikato Awa (Waikato River) and Pu korero (deep history) of Pekapeka tou roa (long-tail bat). Kara, in his role as pukenga toi (project art curator and designer) has called on the expert skills of master weaver, Tina Wirihana (Te Arawa, Tainui Iwi) to produce a bespoke woven ceiling that promotes a warm and calm feeling in the arrival and departure gate area.

A stunning pekapeka kapua (pekapeka cloud formations) designed by Kara, covers the glass balustrades. Three further cultural artworks will be in place in time for an official opening in early December.

Waikato Regional Airport Ltd group chief executive Mark Morgan said the cultural narrative throughout the refurbishment was incredibly important because the terminal now truly reflects the heart of Maaoridom and therefore the heart of the region.

“I’m very proud of what we have achieved together. The days of arriving at a functional and soul-less Hamilton Airport are gone. There can be no doubt, upon landing in Hamilton, that you’ve arrived in a special region, rich in cultural tradition. I think that’s brilliant.”

Morgan said planning for the upgrade began well before the Covid-19 pandemic which decimated airports and air travel around the world.

“It was a major bump in the road and we certainly considered every angle very carefully before deciding to soldier on. That decision speaks to the confidence we and our Board have in Hamilton and the wider region,” he said.

“This was a huge investment and I’m proud of our decision to stay the course despite an unprecedented environment. It illustrates absolute confidence in the airport as well as the strength of our domestic tourism offering and the wider Waikato economy.”

“That was important to our shareholders – five Waikato councils – and we fully supported that. Our contractors did a fantastic job and we were able to keep our terminal open the whole time with very little disruption to passengers.”

Coming weeks will be spent “ironing out any kinks” before a formal opening of the new terminal in early December.

“Perhaps we’ll celebrate then but right now, we still have plenty to do. We’ve got three more culturally significant pieces of artwork coming and we want to make sure those are in place and looking fantastic as soon as possible.” 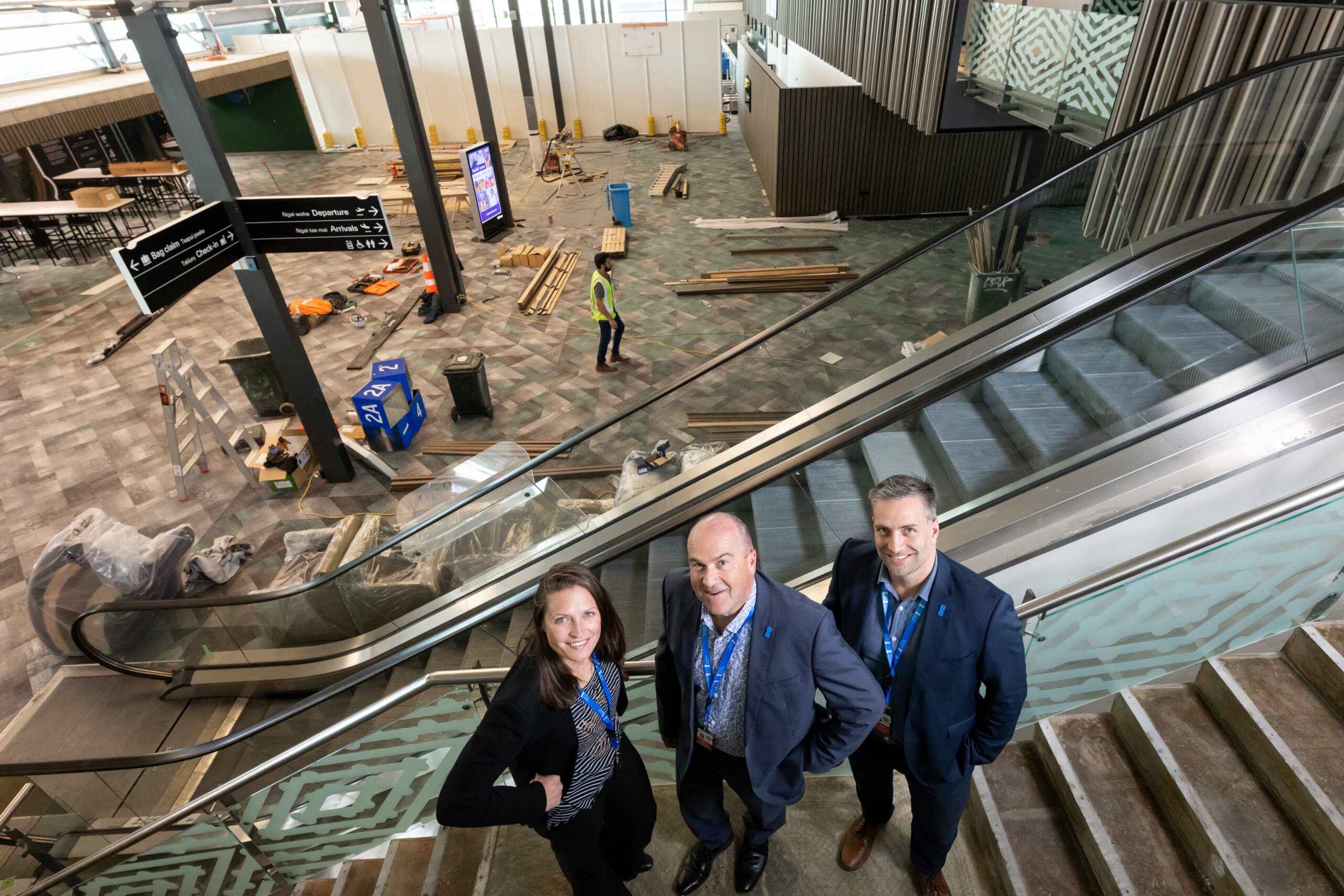 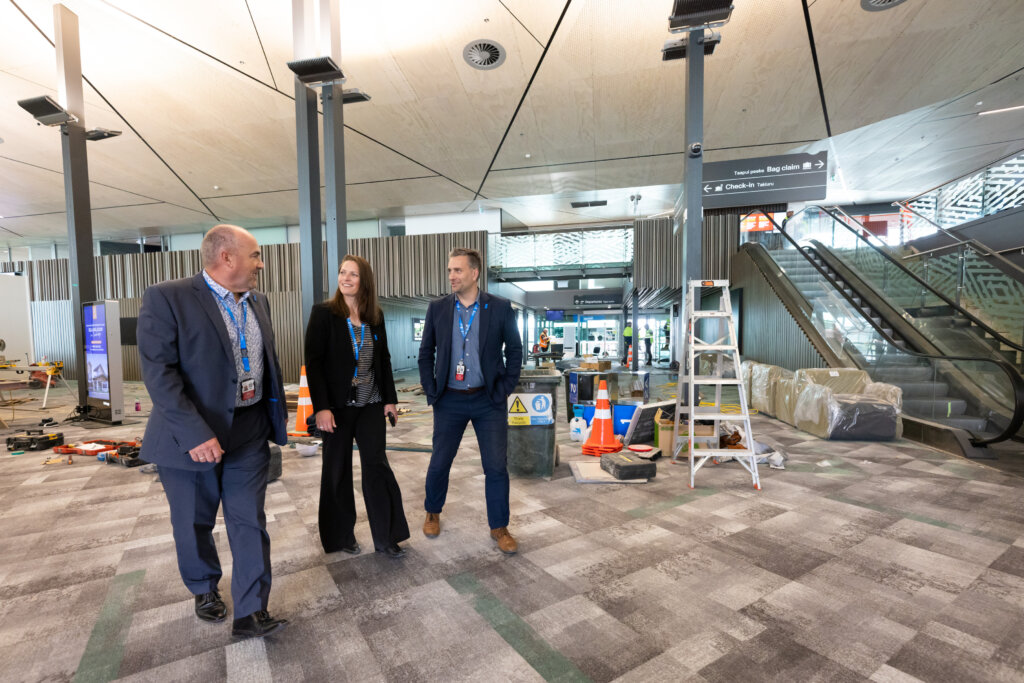