Time for the tower? Miriam Ellis spends several days of the week parked in front of a long-neglected but historic water tower which she says should get a new lease of life.

It is something she and her customers often chat about and now it appears Waipā District Council is going to do something about it.

Ellis talks of how popular climbing tours would be given the height of the tower. But that seems years away given the estimated $1.69 million to bring it up to modern day earthquake standards.

The 24m high tower was built in Payne Park recreation reserve in 1902 with the help of an old black horse named Darkie owned by Robert Morse. The horse helped raise bricks by pulley to the top but was thwarted in his work by school children who regularly visited the building site and fed Darkie apples.

At 21m round and with handmade bricks, it was designed to provide a high pressure town water supply and is a stunning example of civil engineer Ashley John Hunter’s design work. Hunter took part in many engineering projects in the upper North Island, but the tower is seen as his most eye-catching one.

According to Heritage NZ, the bricks were laid in the English bond pattern, renowned for its strength, with decorative features that included a regular pattern of bluestone topped ventilation windows and several horizontal rows of brick dentil pattern. The tower is topped by a brick-lined metal tank and lead roof that held 90,922 litres (20,000 gallons). 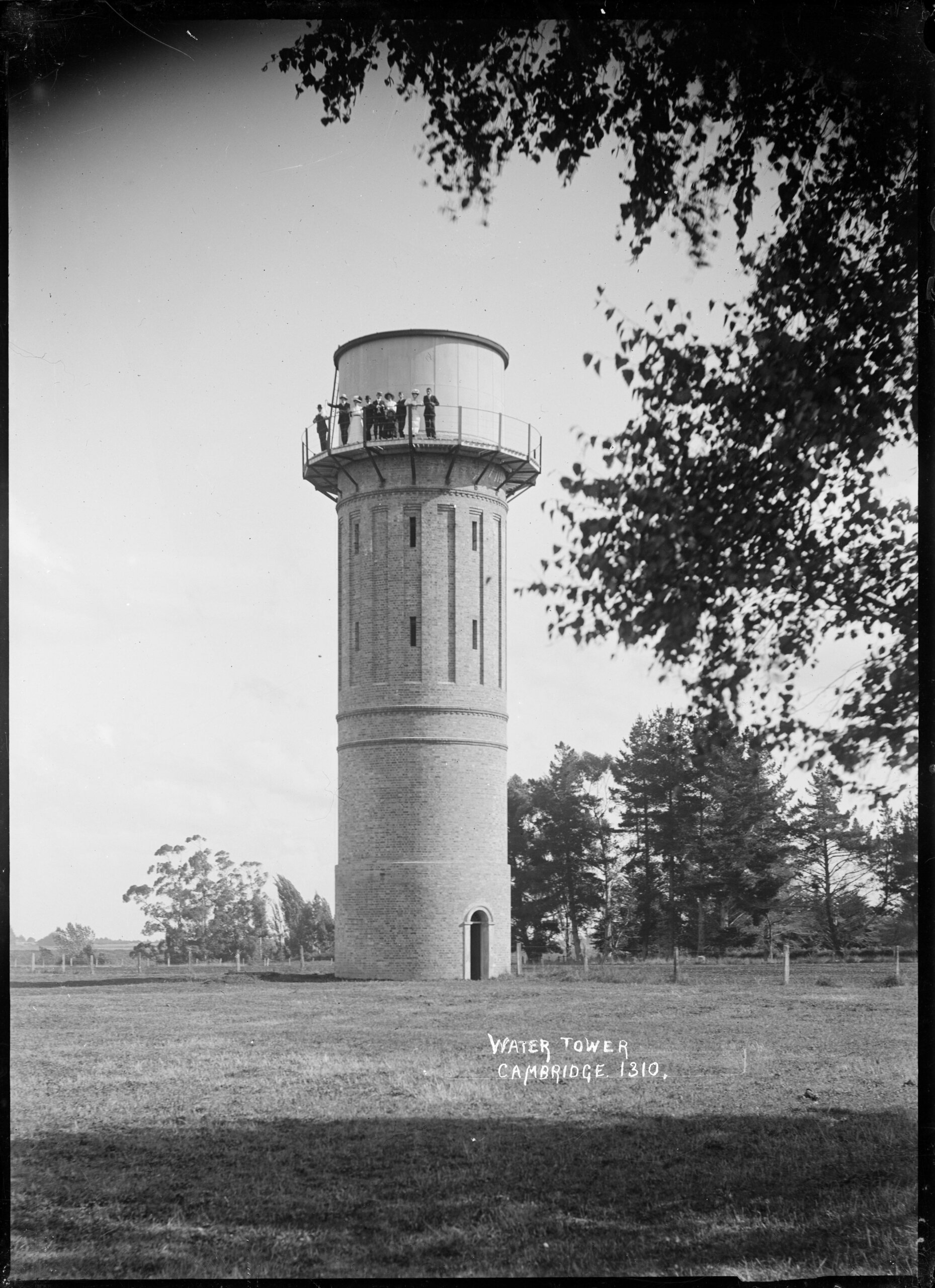 The tower circa 1910s with a group of people standing on the balcony near the top. Photo: Alexander Turnbull Library.

The water tower only fulfilled its substantial function of providing water for the town for two decades. It was decommissioned in 1926 when the Moon’s Spring, from which the tower drew its water supply, was found to be polluted.

The only work done on it since came just before World War II when the lead roof was repaired. In more recent years, the tank’s roof and walkway around the top of the tower have been the victims of neglect.

It is now a registered heritage building and one of only two brick municipal water towers in the country – the other is in Invercargill. Cambridge Resthaven resident Les Winslade was thrilled to say goodbye to the rainy weather so he could get out exercising over the weekend. Les, who turns 102 on September 28, is a regular on the path with his walker outside Resthaven and into Payne Park where the daffodils, planted by Cambridge Tree Trust, are in full bloom. Les is originally from Birkenhead in England and emigrated to New Zealand with his family in 1926. He was awarded the Queen’s Service Medal in 2009 for his service to the Taupō community.

But it is fenced off and now its only visitors are the pigeons that flutter in and out of the narrow openings and drop their poo on the exterior.

Eight years ago, an earthquake assessment found the tower only met 25 per cent of building standards. Council wants to bring it up to a minimum of 67 per cent.

Staff will remove the cast iron tank and the corroded walkway and ladder to mitigate any risk to people using the park and to the tower itself. Heritage New Zealand Pouhere Taonga supports the work which is likely to cost around $375,000.

Deputy chief executive Ken Morris said a budget to bring the tower up to 67 per cent was likely to be about $1.69 million. He expected it to be included in the council’s 2024-2034 Long Term Plan.

“We simply wouldn’t be allowed to do that by Heritage New Zealand given its status. And relocating it, would be hideously expensive. At this stage, the best long-term option is to strengthen the tower. But in the meantime, there’s some practical and reasonable things we can – and should – get on with.”