Knitting a club together 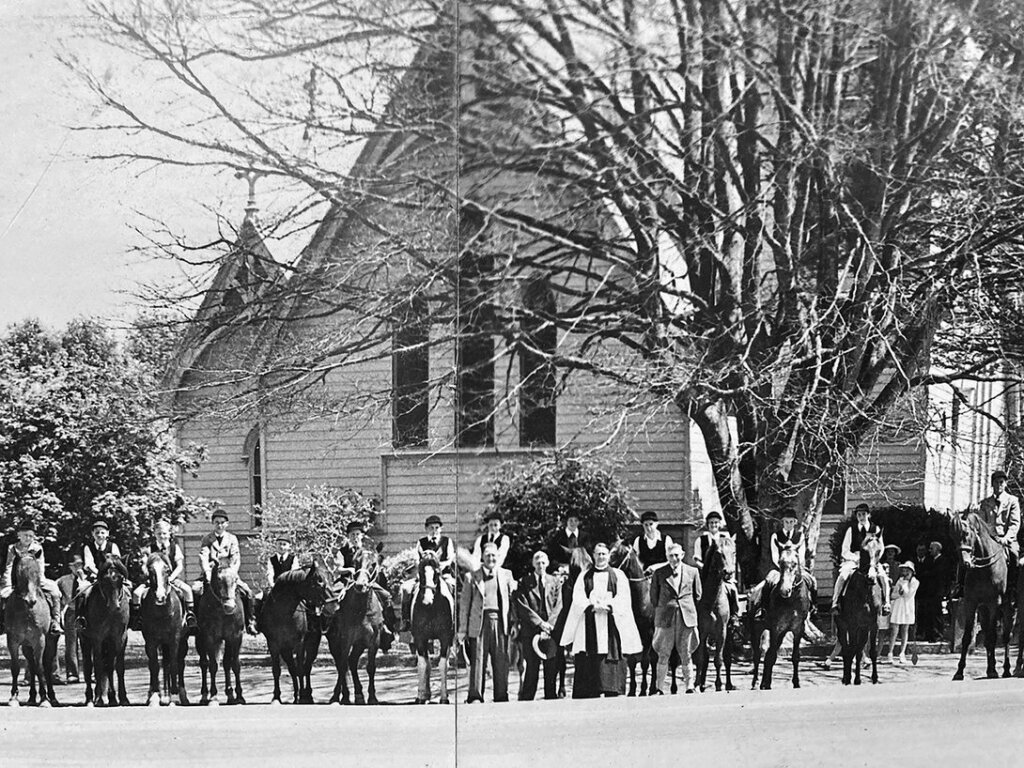 A club rally at St Andrews church in 1950

The Cambridge Pony Club will gather at the Prince Albert pub  – where many equestrian victories have been celebrated – for a 75 Year Jubilee Party on October 8. Harriet Di Maio looks at the club’s history, people and explains what is happening today.

In the early days of Cambridge Pony Club, riding clothes were hard to come by—one mother made the club team’s riding caps out of papier mache.

This DIY attitude characterised much of pony club life back then. Rosettes were made by club mothers, and the distinctive black vests worn by club members were hand knitted.

These days, it’s a slightly different story—75 years later, black is still the club colour, however members now wear lightweight sports tops and the helmets have to meet the latest safety standards. 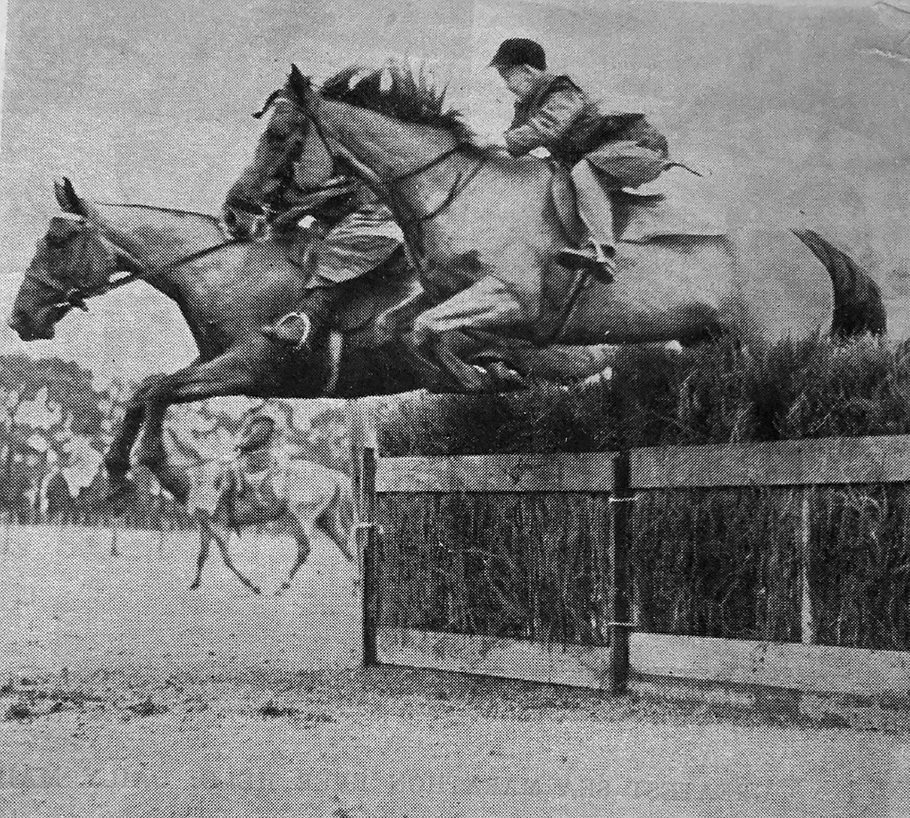 The Cambridge Pony Club was founded in 1947, and the inaugural meeting was held in the parish hall of St Andrew’s parish church.

The late Harold Jackson was a foundation member of the club and was affectionally known to many of the club children as ‘Uncle’.  After his death a memorial drinking fountain was erected at the club grounds which is still functioning today.   Other foundation members included Phil Yearbury, Olive Hartman, Lenva Clark, Len Symington, Lou Strawbridge and Bill Mitchell.

In the early days of the club, rallies were held weekly, and later fortnightly, and pony club children enjoyed treks, day rides and mock hunts.

In 1950 a fully mounted church parade was held outside St Andrew’s Church.

The Auckland club’s gymkhana in 1952 was a highlight where four Cambridge Pony Club riders gained 26 points for their team and won the Silver Cup against other pony clubs competing with over 20 riders. 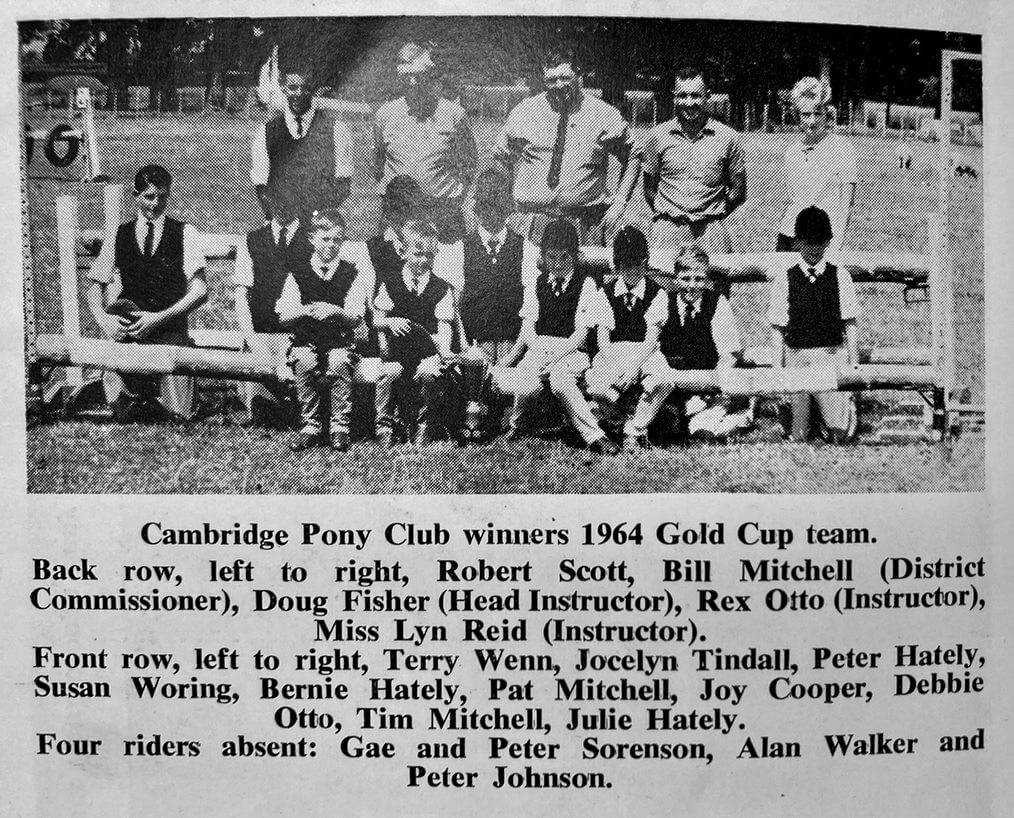 In 1958 the club leased 11 acres of domain land in Leamington for their permanent grounds.  The current club room building was moved onto the site and was an old Ministry of Education classroom. Volunteers worked hard to renovate and repurpose it for the club.

In 1968 the first mini show was held with a night jumping display by Colin Clark and his famous horse Town Boy.  Well known riders of the time included Robert Scott and the Watson brothers who made their name in the polo world.

With the rise in popularity of show jumping, Cyril Yearbury, son of one of the inaugural members Phil Yearbury, founded the North Island Pony Club Show Jumping Champs in 1987 which continue to be run yearly in the Waikato today.

As most children hacked to pony club there were many local branches of the Cambridge Pony Club including Karapiro, Fencourt, Matangi, Kairangi, Leamington and Cambridge Central.  Nowadays most people travel by float or truck so only two branches remain – Leamington and Cambridge East Maungakawa.  The DIY spirit lives on though, with both branches completely dependent on volunteers, and all club members are expected to take part in working bees before they are allowed to go out and compete for their club.

The two remaining branches of Cambridge Pony Club are Leamington and Cambridge East Maungakawa. Membership levels are around 50 children aged from four to 18, and club members continue to compete in competitions such as the Gold Cup, the Pony Club Dressage Champs, the North Island Pony Club Show Jumping Champs, and the Pony Club Eventing Champs.

“It was time for the uniform to be upgraded, the knitted vests just weren’t practical for today’s events where body protectors need to be worn,” district Commissioner Carol Dix said. 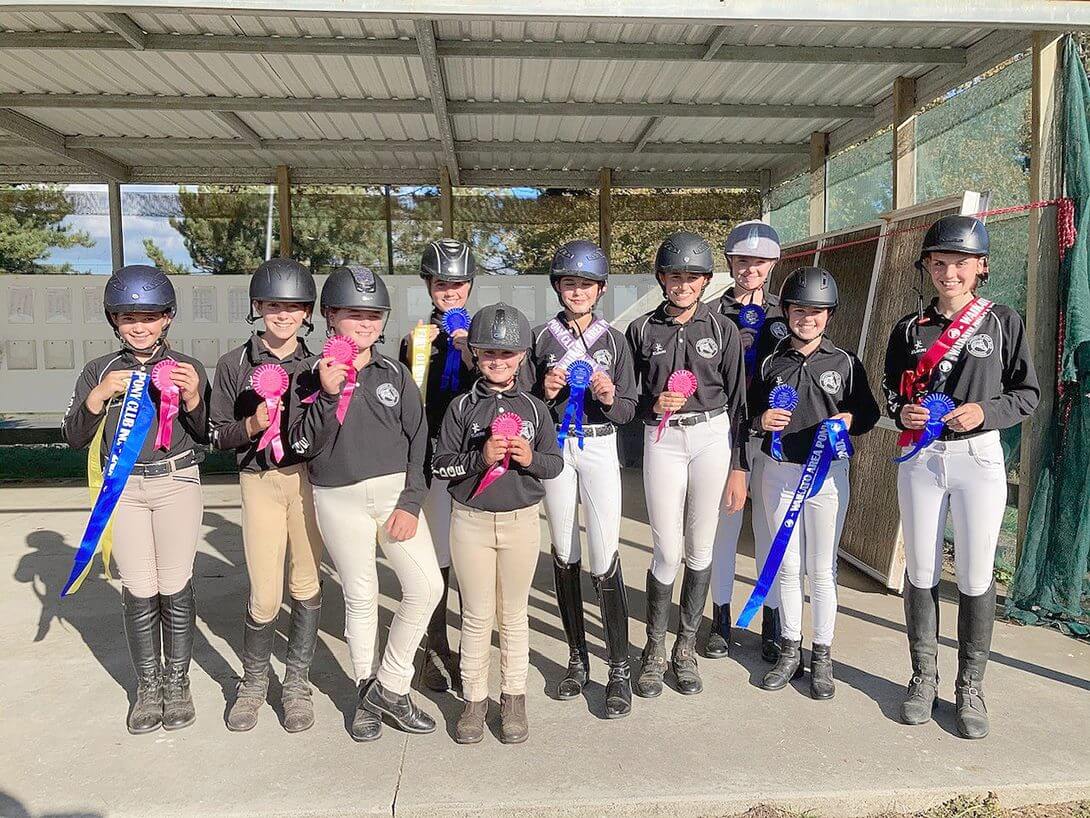 And while show jumping and cross country are still as popular as ever, cowboy challenge is a growing discipline, and the club has some strong dressage riders too.  Both branches hold regular pony club camps, and treks and out of town rallies are also popular.

The youngest member of the club is four-year-old Libby Mathieson, and the most senior members include life members Cyril Yearbury, Doug Jones, Isabelle Smythe, Rosy McWha and Morva Blackie. 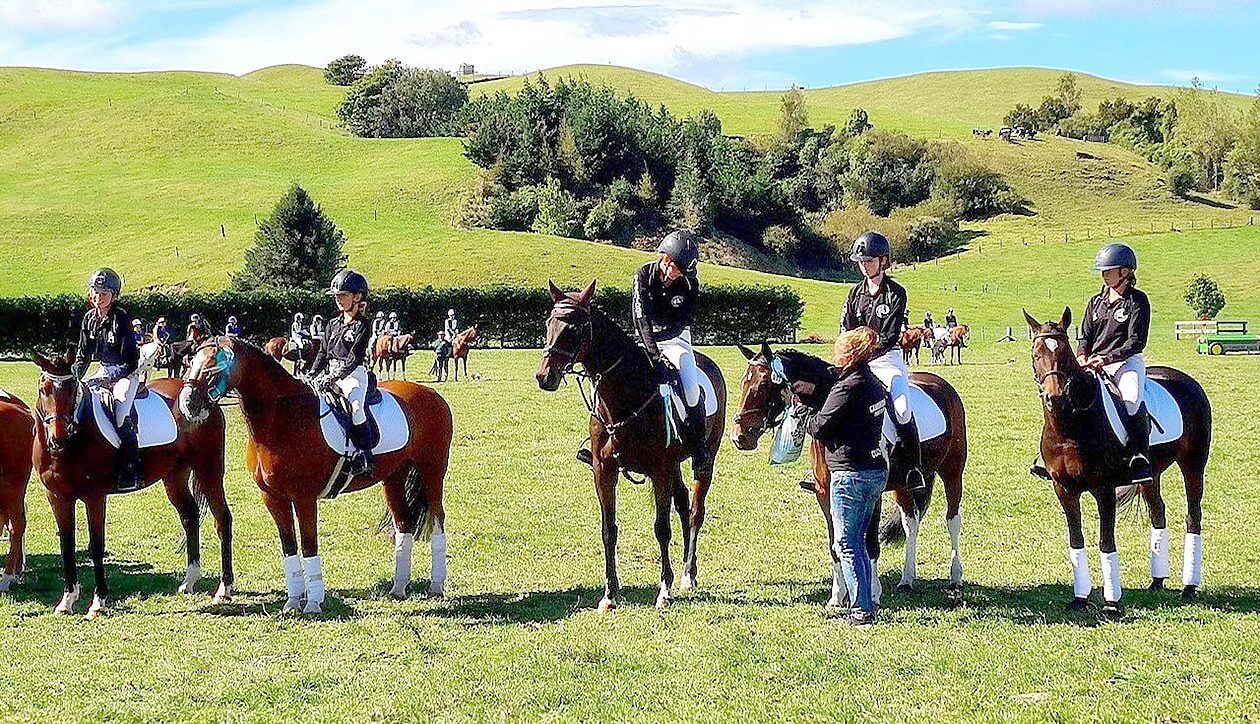 Team members at the 2022 Timberland event.

It seems the fascination with horses and ponies is as strong as ever.

“They may arrive by float, and be kitted out in the latest helmets and body protectors, but the look on the kids’ faces is the same as ever”, says Carol Dix, “and that’s why we all do it.”

Marie Thomas, whose grandchildren Chloe and Charlotte are current members of the Cambridge East branch remembers her own years at Cambridge Pony Club fondly.

“I was given an ex-steeplechaser, Hairini Bay, by someone I used to groom for, and I thought he was wonderful.  I used to hack to pony club all the way from Tauwhare, picking up other pony club kids, including Mark Todd along the way – we used to ride across the high-level bridge to the pony club grounds in Leamington.  We had lots of fun. I remember Mark riding up the hill on his grey pony Little Man, and him telling me that one day he was going to ride at the Olympics.” 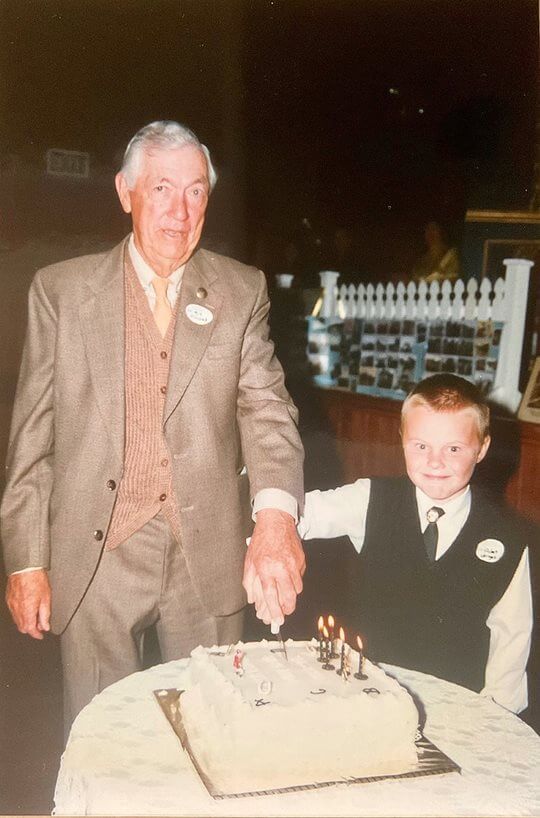 Bill Mitchell and a young member at the 50th Jubilee celebrations.
Bill was a great club contributor and four generations of the Mitchell family have attended club events.

“I used to stop off at the skate park and roller skate before rallies.  My parents were not impressed!  I used to leave my skates behind at the grounds and pick them up on the way back.”

Doug Jones who was a foundation member of the Cambridge East branch when it was set up recalls the branch’s original cross-country course set up on the raceway grounds.  “We’ve always been very lucky having such good grounds to ride on”. Doug still attends most rallies and working bees today.  “All that’s changed is there are more floats now, and the cars are more modern.  Everything else is just the same!”

Committee meetings over the years show similar issues arising as today.  Minutes from a meeting back in 1982 note the cross-country marking sheets at the local ODE being rather awkward with the pens drying up in the heat, while cross county judges at this year’s Hamilton ODE struggled with the new phone App marking system…

Minutes of a 1972 committee meeting note a decision not to include an entry in the annual Christmas Parade, due to the large volumes of traffic in town.