Cambridge: why the fluoride 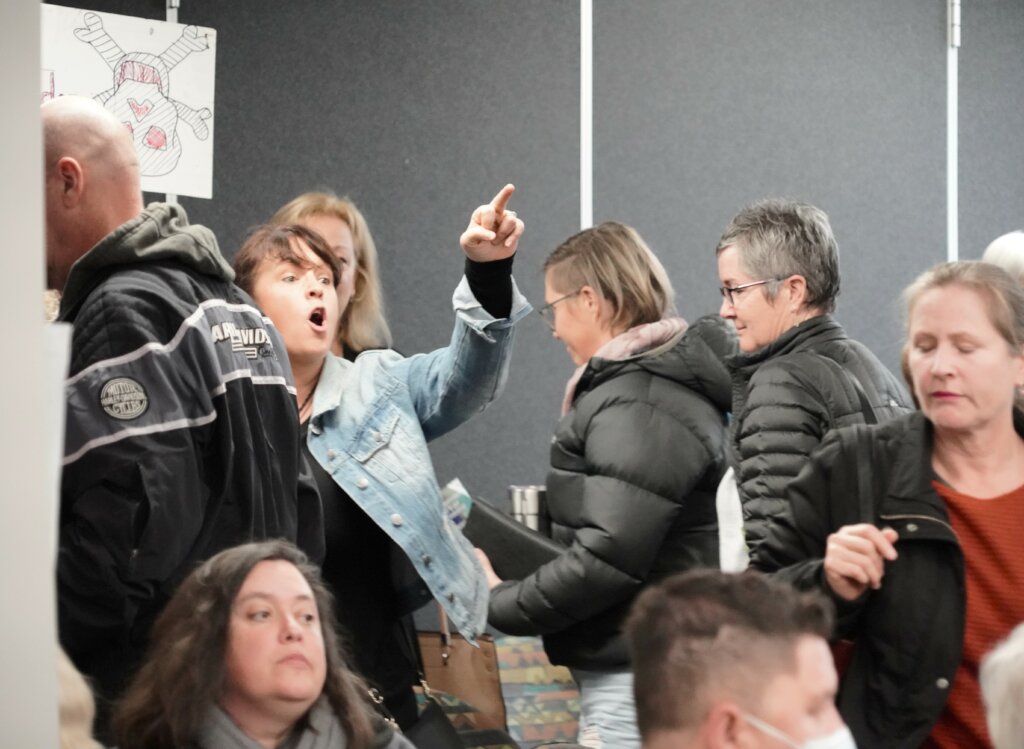 There was anger in the public gallery after Waipā district councillors adopted an updated Water Supply Bylaw on Tuesday. Photo: Benjamin Wilson

Public health officials have revealed why they told Waipā District Council to fluoridate Cambridge’s water supply and not other towns or villages.

It simply came down to size and was a numbers’ game, the health ministry has said.

Adding fluoride into the town’s two water plants would reach approximately 20,833 people and justify the government’s capital spend, estimated at $480,000, the Ministry of Health told the council.

Anti-fluoride campaigners across the district reacted angrily to the news the district would have fluoride in its water for the first time since it was introduced in New Zealand in 1954. More than 50 opponents filled the Waipā chambers in Te Awamutu on Tuesday.

“In reaching my decision, I also considered whether the benefits of adding fluoride to the drinking water outweigh the financial costs, taking into account the state or likely state of the oral health of your communities served by the Cambridge water supply,” Bloomfield told the council.

“There is a significant body of evidence that levels of tooth decay are highest among the most deprived socioeconomic groups,” he said.

Bloomfield said he had reviewed the state of Cambridge’s oral health and found it had significant levels of preventable dental decay.

The News asked the ministry for these figures, and they referred the request to Te Whatu Ora (Waikato Community Oral Health Service). We previously asked Waikato DHB for the figures, but they said that as a consequence of last year’s cyber attack on its computer systems they could not access the information.

The latest Cambridge decay rates The News has been able to access are from 2015.

Kane Titchener, an anti-fluoride campaigner and Te Awamutu Community Board member, outlined his opposition to fluoride to the Strategic Planning and Policy committee meeting on Tuesday.

His presentation to the council’s draft Water Supply bylaw said the council’s role was to “protect, promote and maintain public health safety”.

The council would be in breach of its water policy if it decided to go ahead with water fluoridation, he said.

He asked the council to tell the Ministry of Health not to fluoridate Cambridge or any other Waipā township due to the latest science which he said showed a lowering of IQ because of fluoride exposure.

Titchener said an alternative to fluoridation was the Scotland Childsmile Programme, funded by the Scottish government and introduced 11 years ago, which sees every child provided with a dental pack containing a toothbrush and a tube of fluoridated toothpaste.

Titchener accused mayor Jim Mylchreest of reneging on an agreement to hold a discussion with both sides of the fluoride debate.

“Waipā has allowed this undemocratic situation to arise, resulting in mandatory fluoridation.”

“It’s a criminal offence for the council not to comply with the direction. It’s also not within council’s powers not to fluoridate,” she said.

The councillors voted to adopt the Water Supply Bylaw replacing the 2013 version.

“Shame on you, you’re criminals,” a member of the public shouted.

“Your grandchildren and children have to drink that water. This is on you,” shouted another while others said “disgusting” and “hope you sleep at night” and “you’re poisoning us.”