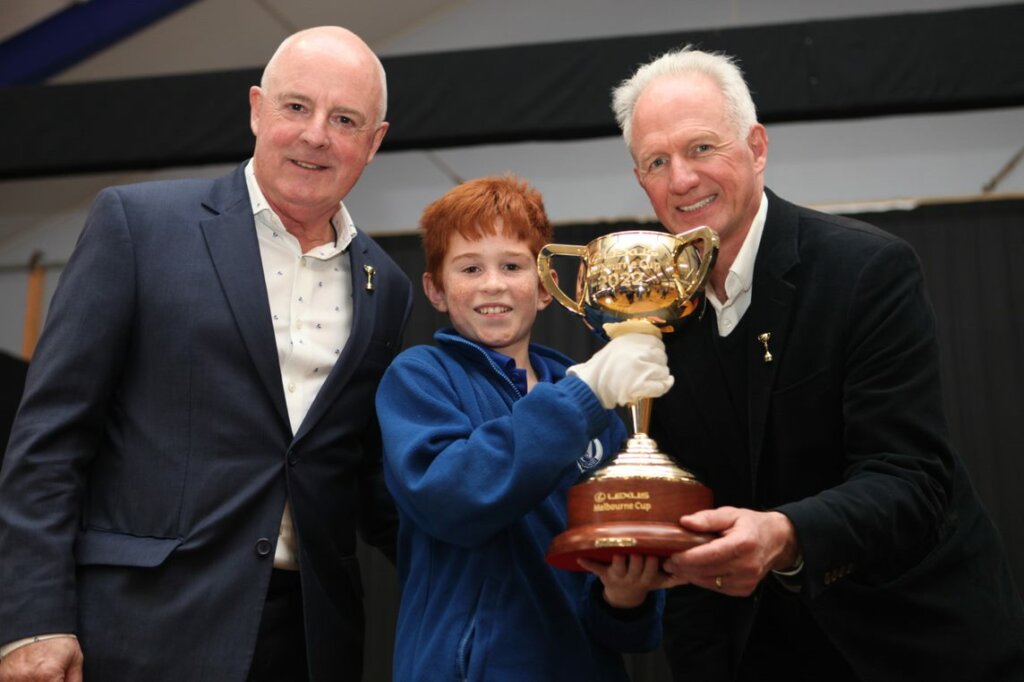 Student James Morgan got to hold the Lexus Melbourne Cup when it visited Cambridge Middle School during a whistle-stop tour of New Zealand last week – and found it a heavy responsibility.

He had to put on white cotton gloves before lifting it and was worried he’d drop it.

“At first it was pretty nerve-racking and then it was heavy,” said Morgan, who has family connections in the horse racing industry.

McDonald grew up in Cambridge and attended Cambridge Middle School as a boy – a connection that helped secure CMS’s spot on the cup’s tour.

“With all the connections some of our children and staff have with racing in the district it was pretty special to be able to touch it and see it,” he said.

Victoria Racing Club has been touring Australia and the globe with the Melbourne Cup for 20 years, covering more than 760,000km and visiting more than 560,000 destinations.

Students discovered the Melbourne Cup race was first held in 1861 during the Victorian gold rush era.  Today’s winners divide up about $8 million in prize money, most going to the owner.

The cup’s three handles symbolise the relationship between jockey, owner and trainer and the trophy itself, made of solid 18 carat gold, is worth about $275,000 (Australian).  It takes about 240 hours to make and is awarded to the winning horse’s owner, with smaller replicas given to the trainer and jockey.

Miles, who called the Melbourne Cup 36 times, talked to Cambridge Middle School about his career and showed students a video clip of Australian racehorse Makybe Diva winning the cup for the third time in 2005.

He told Cambridge News that was his “most cherished Melbourne Cup memory”.

“It had never been done before and I doubt we’ll ever see it done again,” he said.

“The aftermath when she came back, she’d won the cup, she came back and she stood in front of the stands packed with 110,000 people.  Glen Boss rode her and he just dropped the reins and he pointed to her and she virtually bowed to the crowd.  It was just amazing.”

Miles said he had met James McDonald a few times and rated him highly.

“Some of the big names that I was able to call in the early days like Roy Higgins and Harry White – they’re legendary names, you know Darren Gaucis and the like – he holds his own with those,” he said.

“He’s amongst the best jockeys in the world and he’s probably the number one jockey in Australia.

The 2022 cup tour started this month and will run until October, visiting 33 destinations in Australia, New Zealand and Singapore.