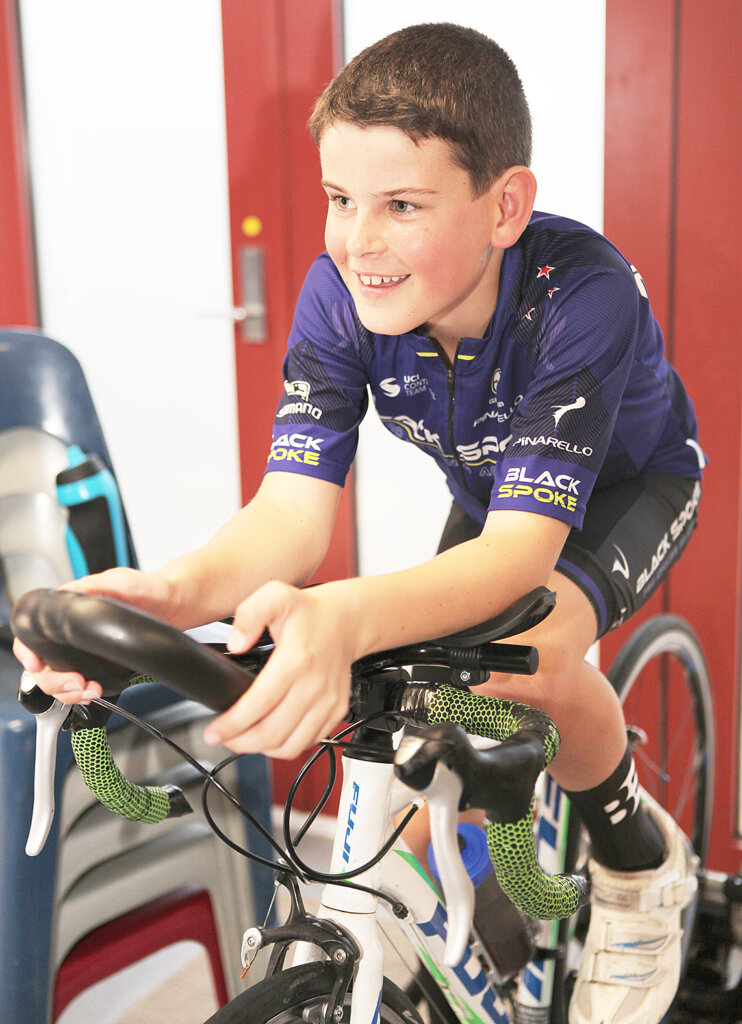 Leamington School student Leo Piper nears the end of his epic six-hour ride to raise money for the Cancer Society.

Could Leo Piper do it?

Could a 10-year-old boy who had never ridden longer than 2.5 hours pedal for six hours straight on a stationary bicycle?

There was only one way to find out.

At 8.56am on Friday, July 8, in a small storage room off the back of Leamington School’s hall, Leo climbed on onto his Fuji racing bicycle, clipped his cleats into his pedals and began cranking.

Leo and his mother Jude Fitness came up with the idea of riding for an entire school day to raise money for the Cancer Society earlier this year because they’d heard many people were facing treatment delays. Leo is still smiling despite the pain he’s feeling in his legs and groin.

“We want to give people with cancer who have kind of just been forgotten through all the Covid stuff a big boost of support,” Jude said.

Leo trained for several months, originally planning to make his practice rides longer and longer but other after-school activities got in the way, so Friday was his first crack at clocking anything over three hours.

His road cycle was clamped into a resistance trainer and a cycling app tracked his heart rate, elevation and distance, showing him riding through a virtual landscape on a large television.

“Anything over 120km will be a bloody good effort mate,” said Jude as he set off.

Leo had a second television playing YouTube videos to keep him entertained but it was a steady stream of visitors that really helped to tick away the hours.

A mufti day was held in his honour, giving him near celebrity status, and entire classes, small groups and mates popped in to chat with him throughout the day, chanting “go Lee-o” and giving him high-fives.

“It’s the first time I’ve ever heard people chanting my name and talking about me,” said Leo.

“I was just walking back to class and they were talking about me, the whole school.”

Just before noon, as Leo neared the half-way mark, a radio station broadcast a story about prostate cancer patients facing long waits and treatment delays due to an overwhelmed medical system.

At 1.45pm Leo got his biggest audience yet when the school hall filled with students and parents for end of term assembly.

“The whole assembly has cheered and done a big chant for him,” Jude said.

Leo was clearly hurting by that point, particularly in his legs and groin.

Jude pointed to the television screen, her face a mixture of admiration and disbelief.

At 2.40pm Leo stood on his pedals, pumping his legs hard to ease his discomfort.

His father Derrick Piper knelt down to photograph a dark line of shredded rubber that had accumulated under his rear tyre.

His mum slid the dividing door between the storage room and the hall closed, blocking out the audience.

“Jump off and have a stretch,” she said.

Leo groaned again, leaning on his bike and swinging his legs out straight from his hips, one at a time. 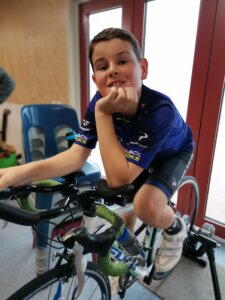 Fatigue is beginning to show as Leo enters the last 30 minutes of his ride.

At 2.48pm Leo leaned on his left armrest, propping his chin in his hand.  He was tired and his groin ached.

“Nearly there buddy, you’ve got this, hang on in there,” Jude said.

At 2.49pm Leo stopped briefly and looked at his dad.

“It’s all up here mate,” Derrick said, pointing at his head.

“Six minutes mate, you can do this,” said Jude.  “Think of something that would make you really happy.”

Suddenly Leo clapped and yelled as a friend was awarded a badge in assembly.

With renewed energy he continued pedalling until teachers called him up to receive a Make a Difference certificate for his “incredible effort and attitude in fundraising for the Cancer Society”.

After assembly finished students flocked in for more high-fives and one of Leo’s teachers, Holly Fulforth, arrived.

Leo began to crank hard on the pedals, sprinting to the finish.

“Shall we do a countdown?” Holly asked.

Leo smiled at the students gathered around his bike.  He dropped his head and pedalled furiously as they counted:

A huge cheer erupted as Leo flung his head back, stared at the ceiling, uttered a quiet word and dropped his head back down between his elbows.

Leo unclipped his cleats as a camera flashed and collapsed onto the grey lino, panting.

“You alright?” his teacher asked.

He grabbed his sipper bottle, hugged his teacher and walked off through the hall to see his mates.