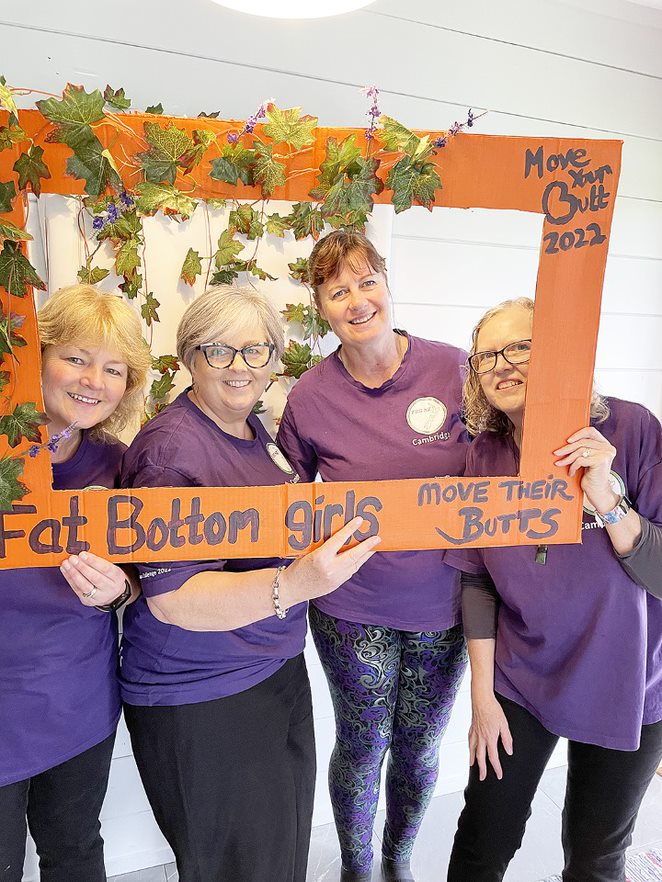 After doing her bit for breasts, Debra Jenkins has given bottoms a boost.

“I’ve hosted a lot of pink breakfasts for breast cancer but this year I thought I really want to start moving more,” Debra said.

“So when Jenny-May popped up on Facebook talking about Move your Butt month I thought right, let’s do this.  You’re accountable for your exercise and you can raise money all in one go.”

She teamed up with three other women from her Fat Bottomed Girls and Guys walking group – Christine Hall, Monique Wiles and Noreen Henderson – and set a $500 fundraising target.

“Two of the ladies had close family members diagnosed with bowel cancer so it was a cause very close to their hearts,” Debra said.

Together the four have walked, cycled, pounded treadmills and sweated through “good old fashioned ‘80s style exercise videos” to collectively cover more than 640km and smash their goal, raising $3077.

Their campaign got a major boost on Sunday with a bottomless brunch at Debra’s Leamington home.

“We had a butt quiz to do with butts and bums and poos and stuff like that and other games like butt pong (bouncing ping pong balls into toilet roll holes) and guessing the length of the large intestine,” Debra said.  “It was a hoot.”

Bowel Cancer NZ’s Move your Butt campaign ambassador Jenny-May Clarkson lost her brother to bowel cancer when he was just 54.

He had many of the classic symptoms of bowel cancer – he couldn’t sleep, was tired all the time and had a sore back and stomach pains – but by the time he was diagnosed, it was already advanced.

“If you do find out you have cancer, you won’t necessarily die of it – if you get help early enough,” Jenny-May said.

Bowel cancer is the second highest cause of cancer death in Aotearoa, killing 100 New Zealanders on average every month.

For more information go to moveyourbutt.org.nz.