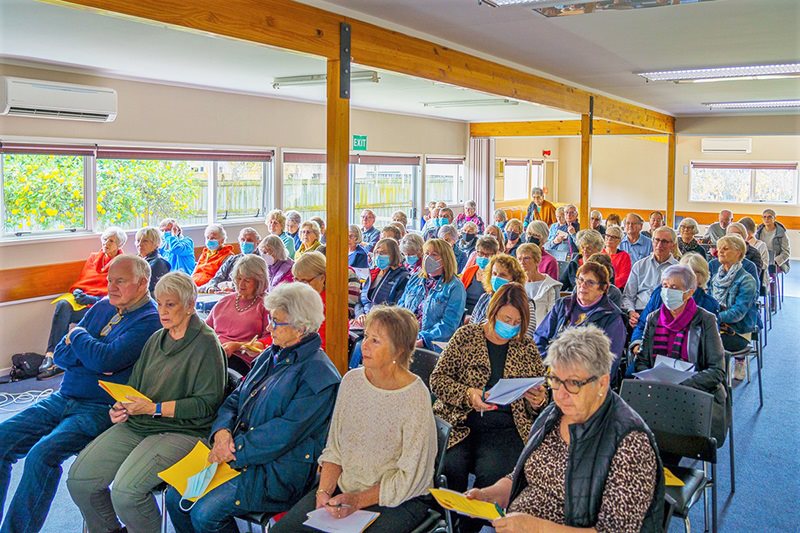 The packed first U3A Cambridge meeting at Cambridge Health and Community Centre. Another will be held there on June 17. Photo: Bruce Hancock.

Interest in the formation of a University of the Third Age – U3A –  Cambridge has been so strong that the group’s founder, businesswoman Carey Church, has already secured a larger venue.

The initial May 24 public interest meeting at the Cambridge Health and Community Centre in Taylor St attracted 76 people, and more than 40 others expressed enthusiasm but were unable to make it on the day.

As a result of that and based on the steady interest shown since the launch, Carey has decided to hold a follow-up public interest meeting at the same venue on Friday June 17, starting at 10.30am.

“That meeting is for all those who couldn’t make it to the first one, or who have just found out about U3A,” she said. “It’s also for those wanting to find out more about the special interest groups, and perhaps join one.”

Carey is elated at the uptake for a Cambridge U3A.

“There was a really good response and we had more than enough volunteers step up for committees, and for helping set up and break down the meeting space,” she said.

“There were a lot of suggestions for special interest groups, which is great, but we also need convenors to run them. Some people think they need to be a subject expert to run a group – that isn’t the case.  The convenor role is an administrative one, they simply organise and manage the groups by getting people together, working out the details, and doing a report back each month for the newsletter. It’s a great opportunity to learn alongside other members.”

Given the likely numbers attending future meetings, Carey has secured a permanent home for U3A Cambridge – the Woolshed at Te Awa Lifecare in Cambridge.  The date for the first meeting there is to be confirmed.

“That is thanks to Te Awa’s generosity, and we are very grateful.”