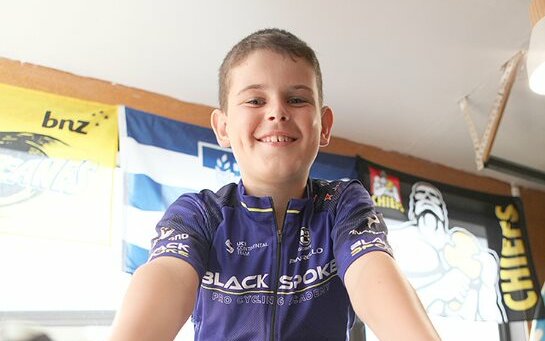 Leamington School student Leo Piper has been training in his garage since March as he prepares to cycle for an entire school day at the end of this term.

‘Outside the comfort zone is where you grow.’

“It was a saying on the Nutri-Grain box,” says Leo Piper, when The News asks if he’s daunted by the prospect of cycling for six hours straight.

The gutsy 10-year-old is gearing up to tackle this challenge on July 8 to raise money for the Cancer Society.

“So we thought this would be a way to combine his passion for cycling with his desire to help people.  He’s going to set up his stationary bike in the Leamington School hall and pedal for the whole school day, only stopping for toilet breaks.  It had to be a hard push to make it a fundraiser but not outside his capabilities.”

Leo’s grandmother, Lois Fitness, died of breast cancer before he was born.

“She was all about family and she was a huge sports nut just like Leo is,” Jude said.  “She would have been really proud of him.”

Jude estimates Leo will cover about 150km on the stationary bike if he lasts the whole six hours – about the distance from Cambridge to Auckland’s CBD.

She and Leo realise it’s difficult for people to give money at the moment, but are hoping the town will get behind their campaign to raise $10,000.

“It might be a bit ambitious but we thought we’d aim high,” Jude said.  “And if everybody in Cambridge donated $1 we’d hit the target easy.  So I encourage everyone to just chuck a buck in.”

So far Leo, who has been training since March, has already raised more than $1500.

Despite his cereal box philosophising, he admits he is daunted about cycling for so long.

His pride is on the line and some of his mates don’t think he can do it.  He’s not even sure himself.  But his mum has faith.

“I think on the day his stubbornness will get him through, because he’s quite pig headed once he’s got a goal,” Jude said.

“Probably the worst case scenario is that he’ll have a really sore bum.”

People who want to  “chuck in a buck” for Leo will  find a givealittle page called Leos-gift.