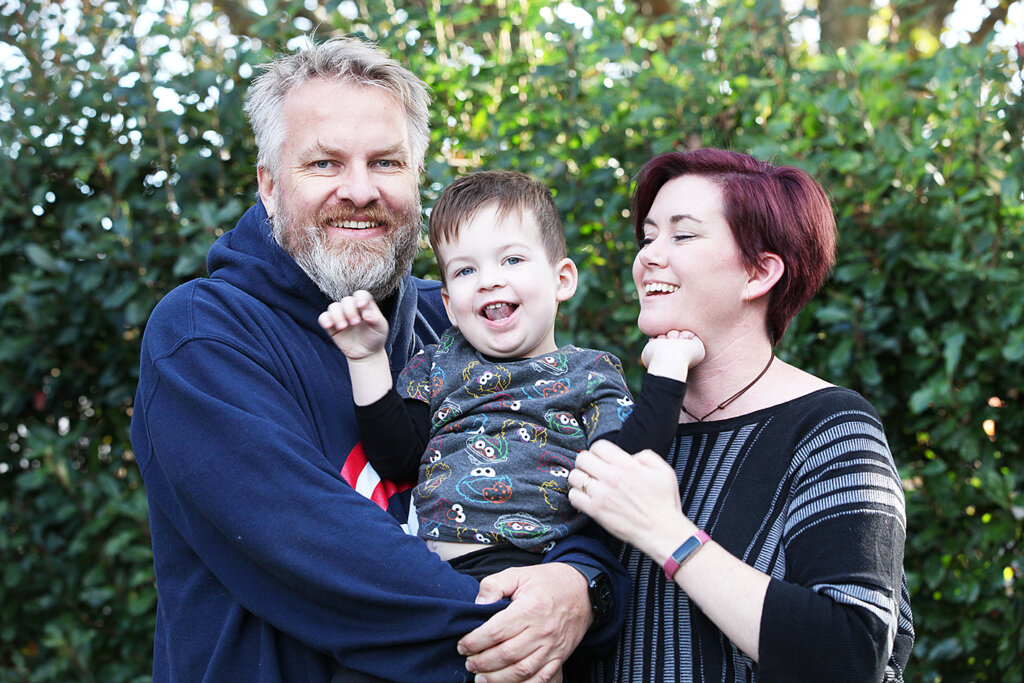 Roger and Jenny Overwater with their son Tobias, who suffers from gastro-oesophageal reflux disease.

Three-year-old Tobias Overwater sits beside his mother Jenny on their living room sofa, quietly pulling apart the aeroplane he built with Stickle Bricks.

There’s no indication he hasn’t had a proper meal for five days until he crawls behind his mum, stands up, wraps his arms around her and lays his head on her shoulder.

It would be so easy if Jenny could just grab him a piece of fruit or a glass of milk from the fridge.

Instead she fetches a plastic tub of Healtheries Potato Stix from the kitchen and tears off the plastic lid.

“He pretty much lives on these,” she says.  “They’re our friend.”

Jenny, who lives in Cambridge, is the national coordinator of the Gastric Reflux Support Network New Zealand (GRSNNZ), also known as Crying Over Spilt Milk, which offers support and information to help families caring for infants and children suffering from gastric reflux.

“Unless you’re going through it or have been through it, it’s very difficult to understand,” she said.

“Talking to another mum who goes ‘yep, we’re in the same boat’ just makes such a difference.”

Gastro-oesophageal reflux disease (Gord) occurs when a valve at the top of the stomach doesn’t close properly after feeding.  Food and digestive acids are regurgitated through the oesophagus and can spill out through the mouth, causing inflammation and pain.

The problem usually resolves by the time babies are 12 months old but can continue for years, especially when underlying health issues are involved.

Jenny first became worried about Tobias when he was two weeks old.  He stopped sleeping well, began to struggle with breastfeeding and “had a couple of really decent power chucks”.

She consulted health professionals but was told not to worry, it was normal.

“You come home and feel like you haven’t been heard because it doesn’t feel normal to see your baby in constant pain,” Jenny said.

An informal survey of 148 New Zealanders caring for children with Gord carried out by Crying Over Spilt Milk recently showed how common that situation is.

While 92 per cent reported Gord was controlled, only 19 per cent had “felt listened to or heard”.

More than  60 per cent of respondents reported being treated as neurotic or over anxious, almost half felt their concerns had been brushed off as behavioural or parenting issues and 55 per cent were dissatisfied with the care and support they’d been offered.

That’s why the theme of this year’s awareness week is “we hear you”.

Three years into their reflux journey, Jenny and her husband Roger are still battling to help their son, who also has mild cerebral palsy and epilepsy.

Tobias gets most of his nutrients from a special milk formula that is pumped into his body at night via a feeding tube threaded down through his stomach and into his small bowel.

When The News visited he hadn’t been able to tolerate his formula for five days because of complications with the feeding tube.

“We’ve been keeping him hydrated with an electrolyte solution but milk is causing him massive pain,” Jenny said.

A recent operation to strengthen the valve at the top of Tobias’ oesophagus and cure his reflux had also failed.

Jenny wants to use her own experiences and knowledge to help other parents.

“I feel so lucky being in Cambridge – we’ve had incredible support from our community,” she said.

“I want to support other parents in the same way.”