How traffic from Waipā heads north – and returns home – is about the change. Good Local editor Roy Pilott gets an early look at the Hamilton section of the Waikato Expressway which will open next month The great divide – this is where northbound traffic can avoid the Hillcrest traffic queues.

“Have you noticed recently the weather forecasters have had it dead right?” Simon Brandon asks as we get into the car.

On the day Brandon, Waikato Expressway Stakeholder and Communications manager for Waka Kotahi is giving me a tour of the soon to be opened Hamilton section of the Waikato Expressway, the forecast is for very heavy showers at 10am.

By 10.15am, when we have reached the point I’m most looking forward to seeing and taking pictures of, it’s absolutely bucketing down, so we stop under a bridge. The Ruakura interchange is the key to the Superhub door and Waikato University.

I know this area well – it’s a couple of hundred metres from my home and I’ve watched the spaghetti junction construction of the bridge over the new road consume a sliver of what was my property, once a gully between us and where a house with a red roof stood was filled in.

Watching that work over several weeks gave me a clear indication of the volume of this project – a 22km long bypass which will cut a quarter of an hour – at least – of motorists’ time.

It also gave me a first hand view of how this huge project has been planned down to the smallest degree. 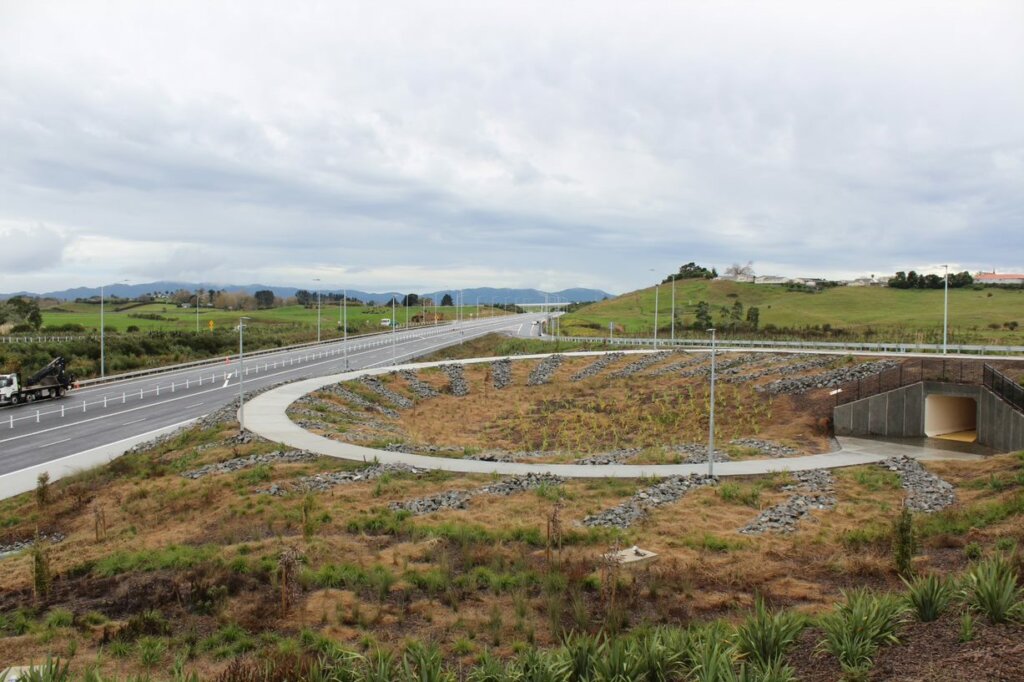 The Resolution Interchange, looking north to the Osborne Rd overbridge.

Brandon and Grant Hubbard, who is the Communications and Stakeholder manager for the CityEdge Alliance/Hamilton Section project, are, like me, veteran journalists. We worked together a generation ago in the old Waikato Times offices in Foreman Rd and all three of us have switched to the “dark side” of communications work.

The pair’s skills have been put to great use as issues with neighbours were dealt with. Grant Hubbard has taken his share of grumpy calls from me. They are always handled brilliantly. Multiply me by a factor of 100 along the expressway and you get an idea of the potential for 22kms of grumpiness. 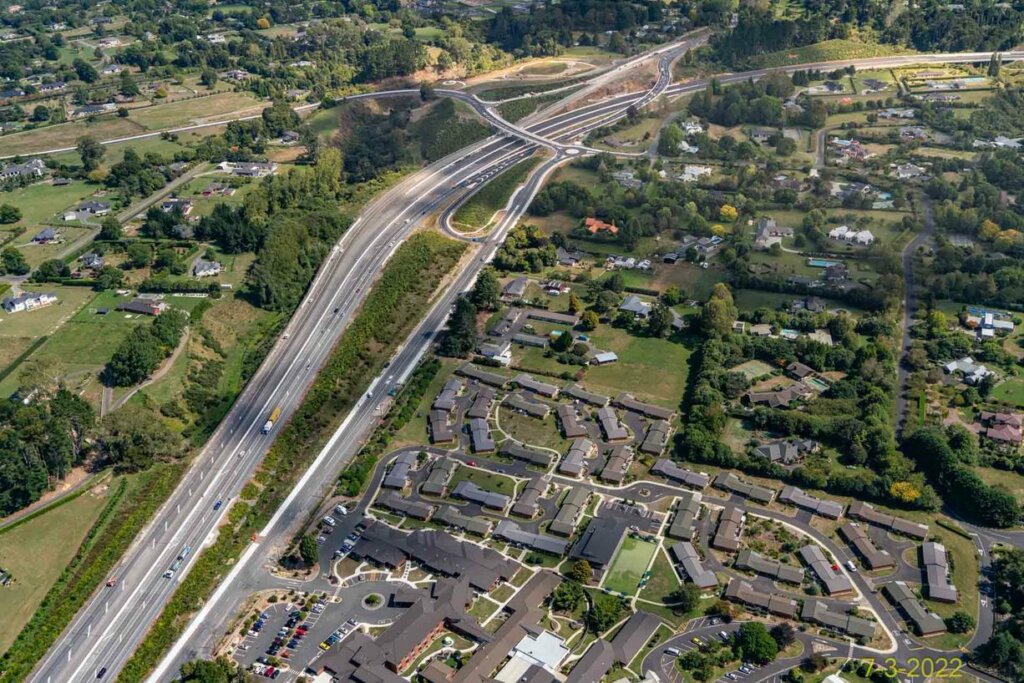 The Southern Interchange takes northbound traffic away from Hillcrest.

But for all the controversy over the selected route and the inevitable invasiveness of the work, I struggle to find a story about anyone complaining.

The neighbours also include native wildlife who should come out on top. Wetlands have been created, thousands of native plantings carried out – and, interestingly, thanks to the sharing of the planting programme with neighbours, there has been an effort by them to replicate them on their own properties.

Brandon notes that as each section of the expressway from Auckland south has been started the knowledge about how to handle issues and plan for issues – and avoid issues – are improved.

As many as 30,000 cars go past our house heading to and from Hillcrest on a busy day. Next month I hope most will instead take the expressway behind the stand of old pines on the western edge of the property. The Greenhill Interchange, which involved cutting Greenhill Road in half.

Brandon and I took the journey north, driving on the southbound side in the rain at a snail’s pace as he pointed out the features of the project. It’s a bit like taking a journey through a familiar place, but by rail, on a route which gives you different views.

No surprise that we were under Matangi Rd pretty quickly – I expect it will become about a minute’s drive next month. The road then swings northeast, under Morrinsville Rd, and we are heading to the first of three major interchanges.

The gigantic inland port at the Ruakura Superhub will be opened by the expressway, heavy vehicles will give Hillcrest a miss and be there within five minutes of reaching the southern part of the city. I can only hazard a guess at the financial benefit of that when the Tainui Group Holdings project is in full flight. You can see why there is a push to have the expressway pushed through to Piarere. The same interchange will take traffic to Waikato University, and then exit for southbound traffic heading to the southern part of the city. It’s going to be busy.

Next up is the Greenhill interchange. It’s not that long ago I used to drive up Greenhill Rd where one of the Waikato Times’ poker schools had a base. It was out in the country. Now been divided by the expressway and is almost part of the city. 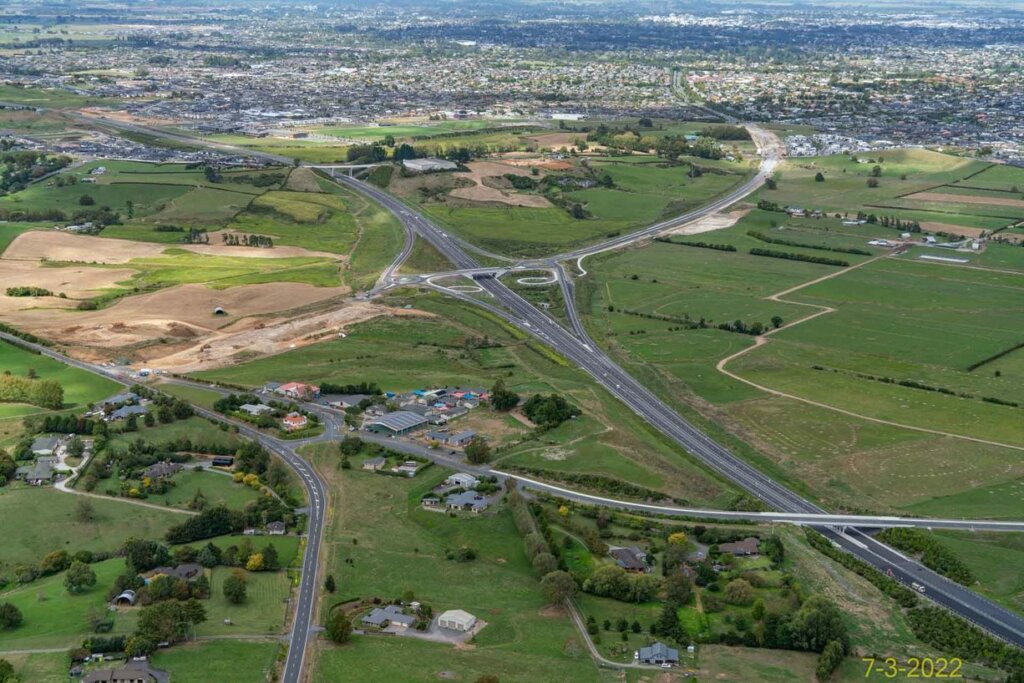 The Resolution Interchange illustrates the forward thinking behind the expressway planning.

Here we are at the closest point to Wairere Drive – Hamilton’s ring road, which is also likely to see less traffic when the new road opens – and that’s good news for commuters.

You are not, as Brandon points out, going to jump onto the expressway to get a pint of milk.

Under Gordonton Rd – another popular route for traffic heading to Auckland which will be less used – and Horsham Downs Rd, we are within site of the huge Resolution Drive interchange, where planning for the future is evident as the city grows.

Here the close work with tangata whenua throughout the project is very evident – and visual.

And the 22km journey is complete with a run through to where the new highway will connect to the Ngāruawāhia section of the expressway.

Do the math – when the new highway opens with a 110kmh speed limit, with flowing traffic the journey around Hamilton will take 12 minutes. Do it through the city today in less than half an hour and you are doing well.

It will take the main highway’s dual carriageway from Karāpiro to Auckland.

When ever I do that journey, I’m reminded of the late former Hamilton deputy mayor Ian Drabble who lamented the condition of the “goat track” between Hamilton and Auckland.
I’m sure the gentleman would look down and approve.