Pirate of the airwaves, in Cambridge One of Chris Prouse’s neighbours told him recently when her crook hip is playing up in the middle of the night, she prefers to listen to Cambridge Oaks FM.

The music takes her back to memories of what life was like when it was being played on the radio and helps her insomnia. Talkback radio gets her mind going.

“It’s all about the music,” Prouse, 76, a radio veteran who worked as a technician and engineer at Radio Hauraki for 13 years including stints onboard the Tiri II in Auckland’s Hauraki Gulf.

The former “pirate of the airwaves” now operates a legal 24/7 FM radio station from his garage in the Cambridge Oaks Lifestyle Village playing music his neighbours want to hear.

The Oaks is at 88.3FM, one of the 11 frequencies made available to low-power radio stations in New Zealand.

Its reach around Cambridge is patchy because of the height of the antenna on a pole in Prouse’s back yard.

If the antenna was on Pukemako (Sanatorium Hill) the station, with its mixture of songs from the 50s, 60s, 70s and 80s, would boom around Cambridge.

Instead, it is the residents at Cambridge Oaks and others within three to five kilometres of Prouse’s Terry Came Drive house who can tune in. He does not have a digital presence (yet), so some residents had to get their old radios out of storage or buy new ones to tune in.

There is no advertising on The Oaks and Prouse has no intention of securing any. 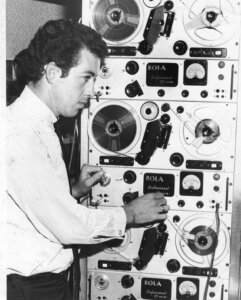 Chris Prouse as a technician onboard Radio Hauraki’s Tiri II in 1969.

“I’m not racing around the neighbourhood trying to get advertising.

“It’s all about the memories the music brings forward and that’s what I like about it.”

He is happy to cover the annual $406 cost to Australasian Performing Right Association Limited (APRA) as a non-commercial radio station and to source music people request.

He takes requests and has established speciality sessions; every Friday from 7pm to 9pm ‘It’s Country’ and then every Sunday 7pm-8pm a Jazz Hour and from 8pm-9pm Big Band swing for Norm in the village.

On the hour and half hour, there is always a Kiwi song – many of them from New Zealand musicians he still counts as close friends.

In 2017 piano tuner Brian Holden, another Oaks resident and formerly part of The Roulettes band out of Rotorua, released a CD of cover songs called Plug it In, recorded in his home studio. Oaks FM is probably the only radio station that plays that.

“It’s whatever people in there want to hear.” Aaron Anderson of AB Soundbytes in Hamilton makes syndicated programmes for the independent radio stations around New Zealand and programmes include the New Zealand Retro Weekly Top 40 Countdown, a weekly trip back in time to New Zealand in the 1970s and 1980s. Oaks FM plays it on Saturday from 4pm.

Prouse and his wife Rose met at Hauraki where she worked in promotions and where she says her claim to fame was her long hair and the see through muslin dress, which she would wear at the Albert Park concerts. Hauraki first started broadcasting from the Tiri on 1480 kHz in December 1966 on the waters of Auckland’s Hauraki Gulf skirting the then broadcasting laws by operating three miles offshore.

The government controlled all radio at the time and music was limited to Top 20 hit parades and songs that had been released months before in the UK or United States.

Prouse joined the station in April 1968, soon after the Wahine ferry disaster, working from the studios in Auckland and on Tiri II on the water after the first Tiri had ran aground on Great Barrier Island rocks.

It was Lowe who offered Prouse a job at Hauraki. He had just finished working for EMI in Lower Hutt setting up a studio and before that with NZBC in Wellington, Whanganui and Palmerston North. Within two days he packed up his life in Wellington to head to Auckland. Onboard the Tiri II 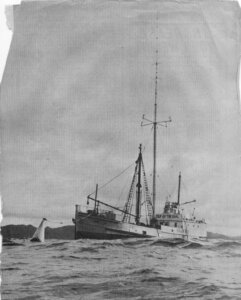 Tiri II out at sea on the Hauraki Gulf. 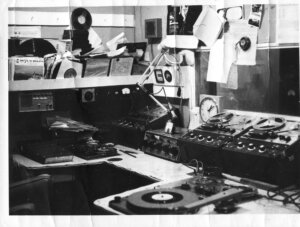 Inside the Hauraki studios on land.

Hauraki played songs you could not hear on other New Zealand Broadcasting Corporation (NZBC) stations. Airline pilots and stewards used to bring records back from overseas that had just been released there for Hauraki to play.

Radio Hauraki had limited live radio. The studios were land-based and most programmes were recorded there on reel-to-reel tapes in half hour segments a week prior to their broadcast. This meant that while contests and current top tunes could be accommodated, news and weather were more of a challenge.

“There were no comments about ‘you better bring your washing in’ before introducing a song,” said Prouse.

Every tape started right on the half hour and finished with instrumental music.

That was so the next tape could be timed to start right on time and take into consideration the impact the ship’s engines were having on the tapes’ speed.

“You had to keep the generators at speed because the tapes and the turntables were set to the engine.” Chris and Rose Prouse’s garage has no room for cars, housing a radio station instead.

The news was “flogged” off 1ZB because they could not get the morning newspaper to the boat on time.

Merv Smith, who was breakfast announcer and king of the airwaves on 1ZB, was reading the news one day and said: ‘am I going too fast for you Lloyd?’ Lloyd Griffiths was the Tiri captain who was making notes so a Hauraki DJ could read the bullet point news later.

“We’d do the news out there and breakfast shows were pretty much live. Messages came from town via telegram.”

Auckland Radio maritime service would call the ship up with the telegram.

“One of the funny things was you had one part of the Post Office trying to close us down, but we found out if we became a licensed receiving station, the Post Office would pay us for accepting the telegrams they were sending us,” said Prouse.

Gapes, a former NZ Truth journalist, was general manager and the glue that held the radio station together including ensuring the crew was well fed.

Everybody got paid the same amount of money each week on a Friday.

When Radio Hauraki was finally granted a broadcast licence in 1970, they broadcast for the final time on Queen’s Birthday weekend and on their way back to shore on Monday June 1, playing Born Free continuously, announcer Rick Grant was lost overboard.

The Prouses moved from Auckland’s North Shore to Ohope Beach in 2007 and owned a service electronics and communications business in Whakatane which they sold in 2017. To remain close to their Auckland-based family and friends, the couple moved to Cambridge in December 2018.

In July 2020 he drew on his long-time radio industry experience to start Oaks FM.

“Midway through Covid in 2020 I thought to myself ‘I can’t go anywhere I can’t do anything; I can’t play golf. Bugger, I’ll set myself up as a low powered FM station.’

“I still know quite a few people in the engineering side of the industry because I employed most of them. I glued together some gear and got it going and I leaned on some other mates and got better gear.

“The sound and the transmission capability of the station is as good as any of the bigger network stations except it doesn’t have the same coverage.”

But what it does have is the music of your life, says Prouse, and that is what matters.