Not your average piano There is only one other functional Wurlitzer Model K left in the world.

There are only two Wurlitzer Model K Photoplayers left in the world, and one of them can be found in Pirongia.

Before they came with their own soundtracks, Photoplayers were used to give silent movies, previously known as photo plays, their sound.

Piano tuners and restorers, Kevin Hanna and Nathan Smith from the Pirongia based Hamilton Piano Company, have cumulatively put in over 8000 hours of restoration work to get a 1915 Wurlitzer Model K “millimetre perfect.”

It weighs more than a metric tonne and can replace a 15-piece orchestra. “For a lot of people, this will be their biggest one-off legacy,” Smith said.

Photoplayers can be played manually, or automatically, using paper rolls which have the music, and the instruments to use, programmed into them. The Model K uses suction and blow to actuate thousands of valves and pneumatic motors to do this.

In addition to its traditional style piano and (not so traditional) organ, the Model K uses pipes to imitate the sounds of other instruments, like violin and cello, and has a range of instruments built in, including cathedral chimes, glockenspiel, xylophone, castanet, flutes, and trumpets.

Only 292 Model Ks were ever made, seven of those were exported.

New Zealand received one, which was purchased in 1915 by Auckland’s Strand Theatre for $US4850. It played until it went into storage in 1948 and was later stripped for parts.

In the 1960s, it was acquired by collector Pat Newman, who kept it in in storage for over 50 years. The water damaged remains were discovered in a garden shed after Pat died in 2010, along with over one million (now invalid) dollars.

“As soon as movies came out with their own soundtracks, these were literally just boarded over… At the time, they didn’t know that these were going to become obsolete and collectable,” Smith said. A detail of the Wurlitzer logo

Shortly after it was rediscovered, the Opotiki Photoplayer Restoration Trust approached Hanna and Smith – who each have over 15 years of restoration experience – to restore the Model K’s centre unit.

The Photoplayer was deemed to be of national historic significance by a conservator, and received funding from the Lottery Environment and Heritage Fund.

“As funding would come along, we would do jobs.”

Originally, we were only commissioned to do the middle bit… we ended up doing everything.” Smith said.

To understand how the Model K worked, and how to restore it accurately, the pair made three trips to Chicago and spent over 100 hours each taking sketches and tracings of what was the world’s last functioning Model K, owned by the Sanfilippo Foundation.
Smith said that without the generosity of Jeffrey and Rusty Sanfilippo, their restoration efforts wouldn’t have been possible.

“If it wasn’t for them, this wouldn’t have happened.”

They managed to source original instruments from other scrapped Wurlitzers for the project, and recreated the cabinetry, motors, and valves by themselves.

“We have just made all of the motors that drive them.” 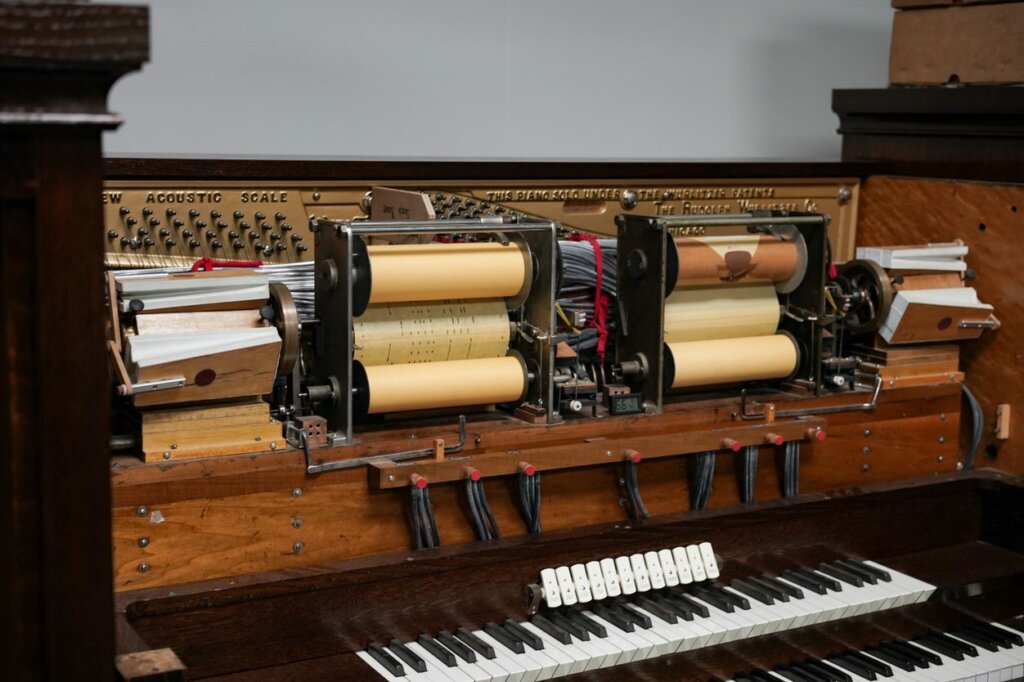 The Model K is now fully functional, and with the exception of some decorative facades, their restoration work is complete.

“We are pretty chuffed really, to think that we started with nothing, no blueprints, we just had to do it. It is a pretty cool achievement,” Smith said.

The Model K was supposed to go to the proposed Wellington Film Museum, but this has since been put on hold.

“In the meantime, we are going to have to plan as if it is going to stay,” Smith said.

“We want to be able to host small groups to put on little silent movies for and do tours.”

The Hamilton Piano Company has a range of other mechanical instruments and pianos on display, including a recently purchased 1919 Coinola Model X, which is the Photoplayer equivalent of a jukebox. They’ve also brought the piano that was used in the Netflix movie ‘The Power of the Dog’, after they had initially restored and tuned it for the movie.