The Waipā community will give Cambridge fire chief Don Gerrand a huge send off on Saturday with a street parade and a service at the Town Hall.

Don died in Waikato Hospital on Monday following a resurgence of the cancer he had been quietly battling.   The 72-year-old slipped away on the day Jocelyn, his wife of 53 years, turned 70.  His passing was marked on Tuesday by family and firefighters who gathered mid-morning to lower the station’s flag to half-mast.

Don’s casket will travel to Saturday’s 11am service on the fire engine ‘Flick’, as part of a parade of fire service vehicles which will be driven up Victoria St to the Town Hall.

There, three screens will be erected inside and then one big TV screen outside so people unable to nab one of the 500 available seats inside can watch the service. Chairs will be placed in the piazza. It will also be live-streamed on the internet.

The service will also see a medal presented to his family awarding Don honorary life membership to the brigade, something that was fast-tracked for the occasion by the Wellington hierarchy.

Several road closures will be in place from earlier on Saturday morning, and deputy fire chief Dennis Hunt said a relief crew from Hamilton will man the station for the day with their own vehicle to cover any calls coming in. 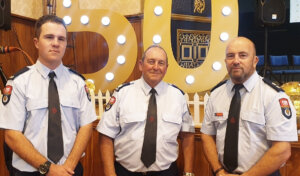 Don is survived by his wife Jocelyn, son Richard and daughter Stephanie, and their families.  At the time of his death, he had done 53 years with the brigade, 28 of them as fire chief, following his father-in-law H L “Bush” Hooker into the service. The family tradition continues with Richard serving 33 years to date, and his son Kase into his fourth year.

Since starting in November 1968, Don has amassed a slew of awards, among them a Queen’s Service Medal in 2008, a Cambridge Community Board Community Award, and the Melvin Jones Fellow Award from the Lions International Foundation.   He was named Cambridge News’ Person of the Year for 2021 in December.

Dennis, who has been with the brigade for 35 years and been deputy fire chief for two, said Don was the man behind the robust health and fine reputation attributed to the Cambridge brigade.

After announcing Don’s passing at Tuesday’s council meeting, Waipā mayor Jim Mylchreest led councillors in a minute’s silence to “recognise the immense contribution Don made to the Waipā district, and Cambridge in particular”.

Cambridge Community Board chair Sue Milner later said Don had given much to the community with his “long and distinguished service”.

Deputy mayor Liz Stolwyk, who is coordinating the council’s role in the service, said it was appropriate for council to support the family in whatever way it could given Don’s contribution.

Dennis said Don had been working his regular shifts right up until he went into hospital on April 20.

“He told me he might be out of action for two to three months, but it wasn’t to be.  His will be huge boots to fill.”

Firefighters stand to attention in memory of Don Gerrand.

Don Gerrand, by the sea