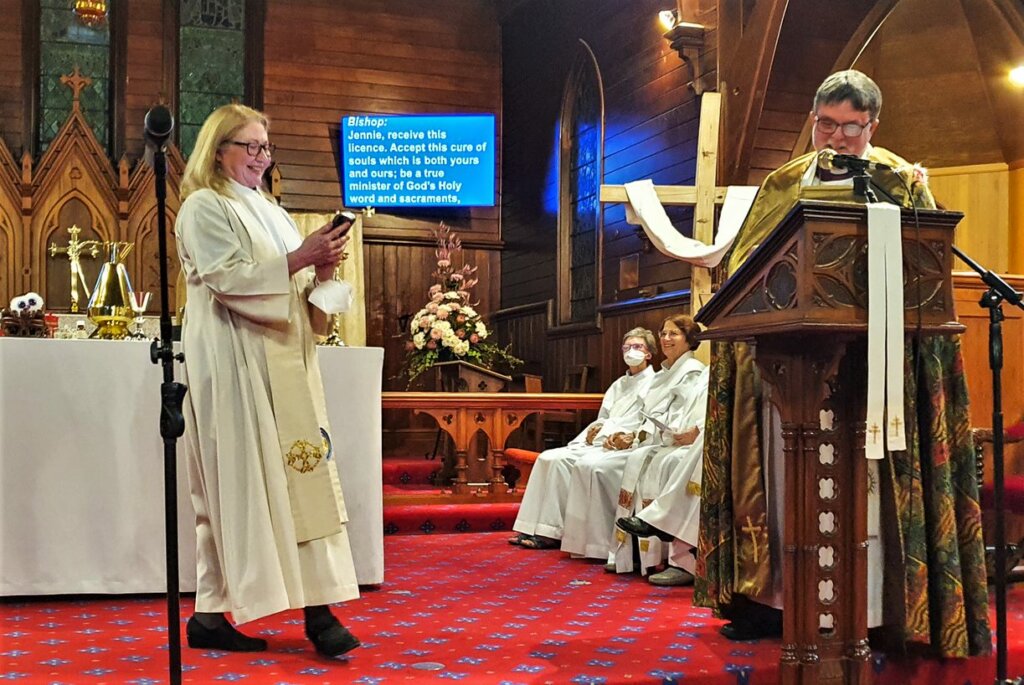 Rev Jennie Savage’s move to take the reins as the new St Andrew’s Church vicar had a bumpy start.

Flip-flopping Covid restrictions meant the family dog Saga arrived in Cambridge three months before her owners did.  The brindle Staghound found a temporary but welcoming hearth within the church family and was part of the furniture by the time Jennie and her husband Sav finally arrived on Maundy Thursday.

“Under normal circumstances, I’d have taken a week to settle in, but instead prepared to lead services on Easter Sunday,” Jennie said.  “Everyone was so welcoming, but then I had been in communication with the congregation for some time via Zoom services and chat sessions. I had met well over 70 people here without ever setting foot in New Zealand.”

Because Jennie’s formal induction on February 3 took place via Zoom, St Andrew’s held a service of celebration on May 2 to formally welcome the couple in person.  The service was led by the Anglican Bishop of Waikato and Taranaki, the Most Rev Philip Richardson.

Despite their halting travel plans, it’s clear there was a plan afoot upstairs to have Jennie fill the shoes vacated by Malcolm French, the St Andrew’s vicar who left last August.  Jennie had previously eyed out an appointment in New Zealand, but while that didn’t materialise, she made enough of an impression for the hierarchy here to suggest she apply for another upcoming vacancy. That was Cambridge and her appointment was announced in early September.

Getting here was another matter.  They had seven tries at securing an MIQ spot. Once past that hurdle and waiting to depart Melbourne on December 27, airport officials told them to go home.

“I thought we had done everything right … but new border exemption changes meant we couldn’t leave,” she said. “It was very, very frustrating, but we were fortunately provided with accommodation by friends. We decided to still send Saga over in late January as she had been in boarding kennels since just before Christmas.”

Now settled in Cambridge Jennie is starting to feel at home, although this is quite different from her two former ministries – five years at Melbourne’s Mt Eliza, and the previous 11 at Mordialloc parish.

“They were very much suburban parishes … this feels quite different,” she said.

Becoming an Anglican vicar wasn’t always her plan.  She had a childhood faith but drifted away during the years she trained as a professional ballet dancer. She performed in Australia and abroad and danced in England for eight years before coming home when her father took ill.  The next few years were taken up with marriage, motherhood and a stint working as a travel agent.

“Then I felt a calling to go and study theology.  I really only wanted to deepen my knowledge of my faith, but then took on more leadership roles and decided I wanted to serve. Since then, I’ve held various positions in the church and taken on governance roles as well.”

The decision to come to New Zealand came on the back of holidays spent here.  Both she and Sav love ‘tramping’ and now that their son and daughter have flown the coop, they felt free to explore a Kiwi adventure.