Cambridge Town Hall was the centre of a three-part RSA event on Monday that tied together ceremonies honouring former New Zealand and French service personnel and their families.

New Zealand’s Returned and Services Association national president BJ Clark was first presented with a korowai cloak. That was followed by the signing of a Memorandum of Understanding between the NZRSA and France’s Union Nationale des Combattants (UNC) – the equivalent of the RSA in France – and the presentation of carved commemorative bowls to the French Embassy and the Cambridge-Le Quesnoy Friendship Association.

RSA national president BJ Clark said all three elements were “separate yet equally significant”.  Before being fitted with the cloak, he said discussions around making one had been ongoing for several years.  In 2019 RSA national kaumātua, Ronald Miki Apiti, approached tribal affiliates of Ngāti Te Wehi.  Alecia Collins volunteered to weave the korowai.  Ms Collins, who is of Ngāti Raukawa/Ngāti Hinerangi descent, completed the task earlier this year with support through the process from Diane Bradshaw of Ngāti Te Wehi and Ngāti Mahuta.

Clark said the gift reflected the kinship and identity of those who shared their wartime experiences.

“I feel incredibly proud to be the first national NZRSA president to wear the cloak. It is a true honour and will be passed from president to president.”

The second ceremony, which was interrupted briefly by the piercing sound of the fire siren, marked the official signing of a Memorandum of Understanding by NZRSA chief executive Marty Donoghue and the New Zealand-based Union Nationale des Combattants (UNC) representative Graham Yarrall.    The document means New Zealand veterans living in France will be now able to access support from the UNC, while French veterans living here can seek help through the RSA. 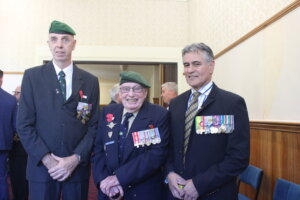 Former parachutists with the French Foreign Legion reminisced at Monday’s RSA event. They are, from left, Gary Dick from Auckland, Wolfe Hucke from Cambridge, and Rotorua’s Phil Taikato.

Ms Mireille Borne of the Embassy of France in Wellington, said France and New Zealand share a particularly significant relationship, made more special through the story of the liberation in November 1918 of Le Quesnoy and that event’s ties to Cambridge.

“Cambridge has a very special status in France… it is the only sister city we have in New Zealand.”

She said France and New Zealand’s shared values remain evident today through New Zealand “standing by our side” in promoting the international rule of law as it pertains to the Ukraine conflict.

The third event of the day saw the presentation of two commemorative poppy bowls crafted by West Coast master carver Jimmy Gordon.  One was presented to the Embassy of France in acknowledgement of the longstanding relationship between the two countries, and the other to the Le Quesnoy Friendship Society in Cambridge.

During lockdown, Gordon elected to carve a poppy bowl for every RSA in the country.  He has made 218 in total, each one featuring a pounamu inlay gifted by iwi.

Clark told guests it was appropriate for the triple ceremony to take place in April, the month of the RSA Poppy Appeal.  He said the 100-year-old organisation was actively encouraging younger veterans to join and was looking at different ways of operating, including delivering online services and, in some cases, moving away from traditional hospitality-based venues.

“RSAs must first and foremost remain focused on providing welfare support to veterans of all ages,” he said. More shots from the ceremony.