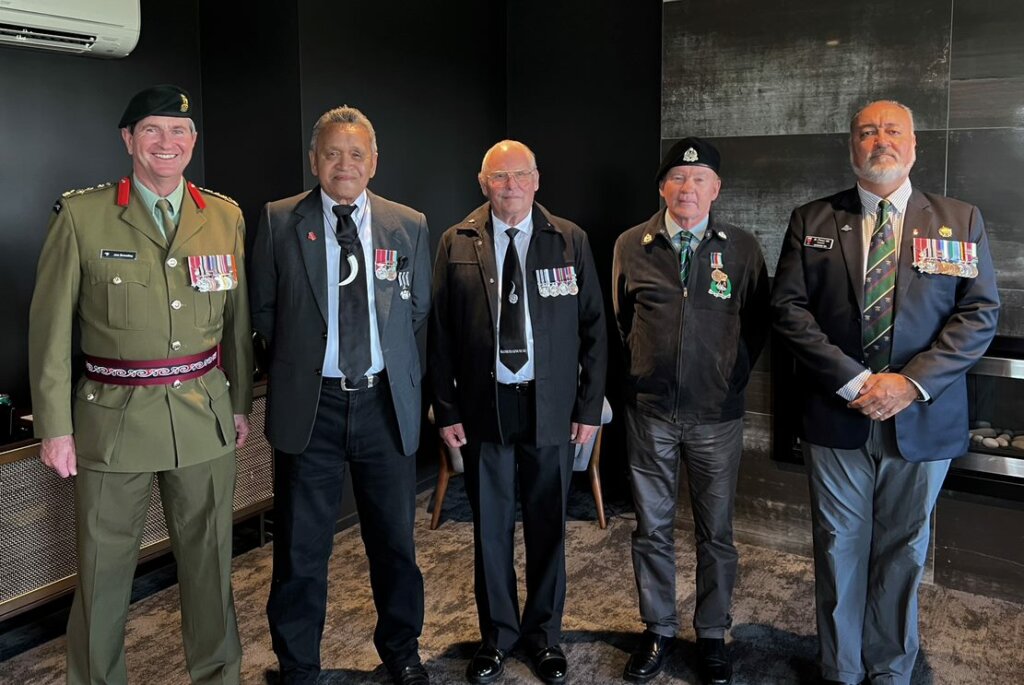 Three veterans were presented with their Operational Service Medals at a Returned Services Association (RSA) gathering in Cambridge last month.

Bob Peterson BEM (British Empire Medal), joined the RNZN as a medical assistant in 1964.  Three years later he was posted to HMNZS Blackpool, which in 1968 went South-East Asia as part of the Commonwealth Far East Strategic Reserve.  While on a night exercise in the South China Seas, in which 40 ships took part in blackout conditions, a collision involving the Australian aircraft carrier HMAS Melbourne and the destroyer, the USS Frank E Evans, resulted in the loss of 74 lives and the USS Frank E Evans being cut in half.  Together with then Lieutenant Paul Murphy, who received his NZOSM earlier this year, Bob was the first to help survivors – it was for this service that he has been awarded the OSM.  Once back in New Zealand, he joined the Navy Hospital before being drafted to the HMNZS Lachlan for a year. He left the Navy in July 1972 and was awarded the BEM in the same year.

The OSM was also awarded to Kerry Ellis, who joined the RNZN in 1968, for his service in the Far East as part of the Commonwealth Far East Strategic Reserve and as part of the ANZUK Alliance Force.  He was later posted to the Royal Yacht Britannia, then served with the NZ Military Police Unit in Singapore. On returning to New Zealand, he was posted to HMNZS Canterbury where he served until he left the Navy in 1988.

Mark Ryan enlisted in 1981 as a Territorial Force trooper posted to the Waikato Wellington East Coast (WAIWEC) RNZAC.  He was later posted to the WAIWEC armoured personnel carrier troop in Ngaruawahia, and throughout his career served in the central North Island, Whanganui and Australia, rising to the rank of corporal. It was for this service that he was awarded the DSM. In 1994, he left the Territorial Force to spend 18 years in the United Kingdom.

The presentations are among those being made following a government decision last November to change the eligibility for the NZOSM to include those who served in the Far East.