Sixty-one Rangiaowhia Road has been blessed on a day when both holy water and tears fell onto the historic whenua.

“When our tupuna were ejected from here, they left with tears of dejection, of sorrow, of pain. Today we are crying for a different reason,” said kaumātua Tom Roa.

In February, Ngāti Apakura and Ngāti Hinetu were unsuccessful at buying historically significant whenua in Rangiaowhia, which caused hurt. Last month, discussions between the Anglican Church, iwi, and landowners, resulted in a deal to see the land returned to mana whenua.

A service on Saturday acknowledged the Church’s support of iwi, and their intention of returning the whenua to them. After the service, archbishop Philip Richardson blessed the whenua with holy water. 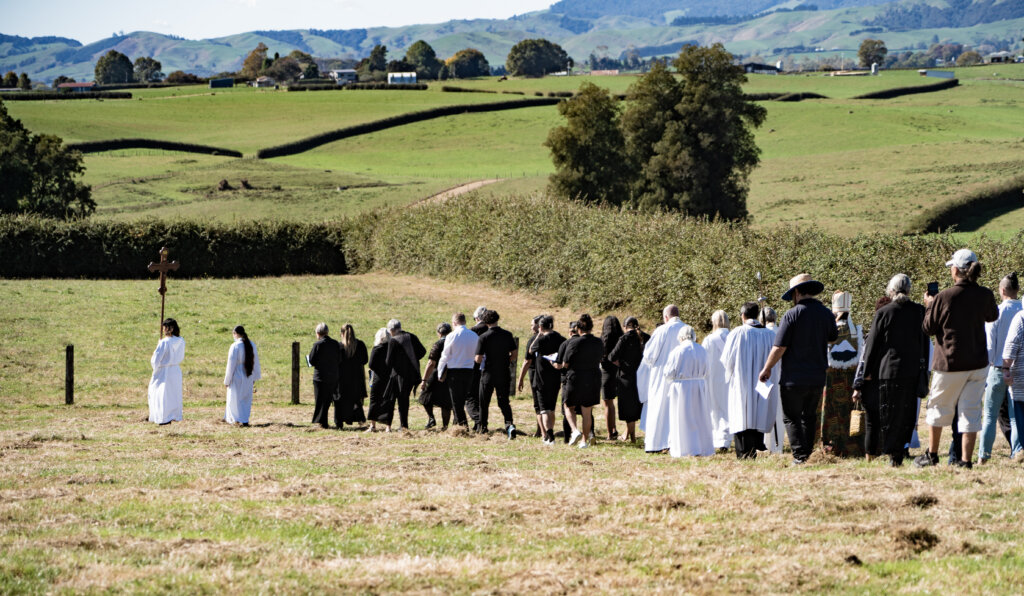 “The support that we offer must be real, it must be down to earth, it must be total. This opportunity for land return represents something of that support today and forever,” Richardson said.

“We look back knowing that we must understand the past fully, unreservedly, and without censor, if we are to learn, if we are to move forward.”

Rangiaowhia was once a thriving settlement for Ngāti Apakura and Ngāti Hinetu, who had a close relationship with the neighbouring Anglican and Catholic churches. On February 21, 1864, Māori took refuge in the churches and other buildings during an attack by colonial forces caused Sixty-one Rangiaowhia Road is placed in between these churches.

“As a church, we are here humbly to reflect on the past, and with deep humility, to stand before the experiences of Ngāti Apakura and Ngāti Hinetu. We come to pay our highest respects, to enter as best we can into your grief, and your loss, and to stand here with solidarity and with aroha,” Richardson said.

“Rangiaowhia is of the most poignant and crucial importance in our history as a nation, and it is not too much to claim of critical importance to humanity as a whole.”

Jenny Charman is one of the original claimants of whenua in Rangiaowhia. She said she is very happy with the outcome but joked she wished it had happened sooner. “I haven’t got that much time you know.” Initially Apakura tried asking the government to assist them in their reclamation of whenua. But as solicitor Emma Whiley said, “the Church has moved faster than the Crown.”

Whiley was Ngāti Apakura’s lawyer for the entirety of their land reclamation efforts.

Apakura Rūnanga Trust chairperson, Bill Harris, told The News that Ngati Apakura plan to build a wharenui (meeting house) on the whenua, as Apakura do not have one of their own.