Competition winners and a new event The easing of Covid restrictions has seen Cambridge Autumn Festival organisers salvage some autumnal art vibe and come up with an entirely new event.

Most festival events were cancelled under Covid’s red traffic light, but able to proceed were the annual Short Story Competition, and the Photo Competition.

An awards evening last week named the winners of both.  At the same time, Autumn Festival organisers decided to add a new pop-up event – a photographic display featuring 26 images, which can be viewed free at the Cambridge i-SITE until May 1.

The display is a spinoff from the festival’s Photo Competition, themed ‘Memorable Waipā Architecture’. 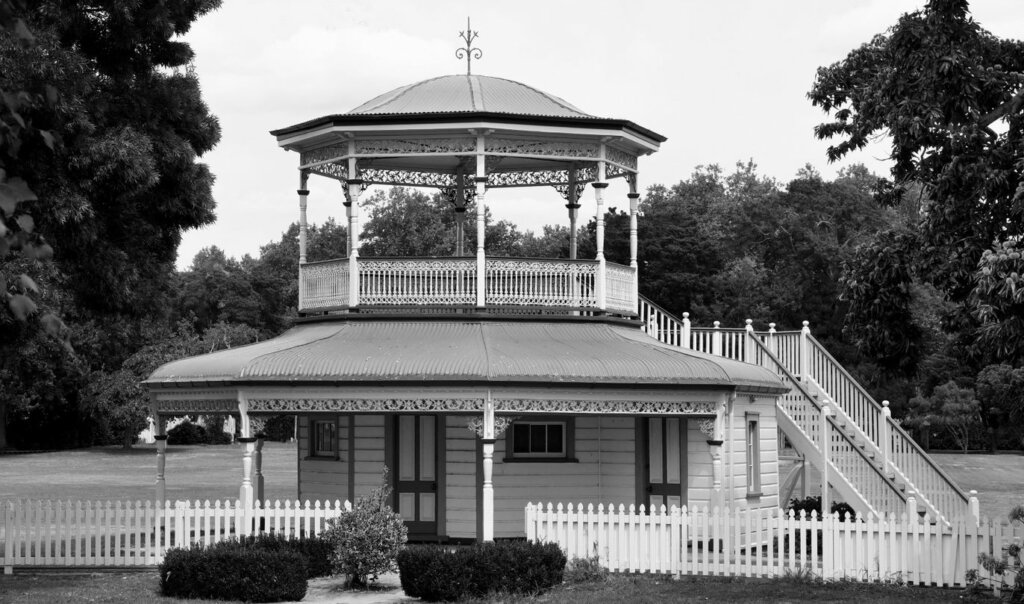 The winning image in this year’s Photo Competition, the Leamington Band Rotunda, was taken by Cambridge’s Brian Holden.

First prize in that went to Cambridge’s Brian Holden for a black and white image of the Leamington Band Rotunda.  The photograph was described by architect Antanas Procuta – whose company Procuta Associates Urban & Architecture (PAUA) is a new sponsor to the competition – as “absolutely stunning … crisply capturing the intricate Victorian detail.”

Antanas joined the judging panel for the first time, as did photographer and gallery owner Jenny Scown.

Brian said that after taking many photos over several weeks, the historical rotunda ticked all the boxes. He took several shots, electing to edit out the bollards and a green rubbish bin.  “The final touch from colour to black and white instantly turned the clock back 100 years.”   An enthusiastic photographer all his life, Brian is keen on taking panoramic images using a drone.  He intends using his winnings to support local photography.

Highly commended was Ōhaupō’s Les Slone for his pastel-hued image of the Cambridge Town Hall. The winner was Auckland business analyst Joseph Williams, who finished his story, ‘January Sun’ the day before his daughter was born.  Second place getter was Waitara’s Joyce Lobban with her story ‘Independence Day’.  Neither was able to attend the awards evening.

Cambridge’s Jamie Russell placed third with his story ‘Decisions of Fate’. A newcomer to creative writing, Jamie said during the awards: “Anyone who even got 1500 coherent words on the page did a great job.”

Judges said the standard and range of entries was high. They also awarded two highly commended writers this year – Kay Meyer from Lower Hutt and Beverley Wood from Hamilton.

Cambridge Autumn Festival chairperson Alana MacKay said the home-grown competition continues to grow. “We started with 52 entries 11 years ago … and now include online entries.  Our sponsors make it possible for the competition to remain free to enter with great prizes to be won.”

The stories can be read online at  https://cambridgeautumnfestival.co.nz/short-story/