Anzac Day, as it should be The crowds returned to Cambridge’s two Anzac Day services on Monday with standing room only in the Town Hall for the Commemorative Service.

Support was back to pre-Covid days as in the still of a misty morning, Group Captain Ants Hawes, a retired NZ Defence chaplain, welcomed returned service people and about 200 people to the Dawn Service.

In Victoria Square an unexpected visitor provided a real highlight. The red Poppies hot air balloon piloted by Daryl McKee lit up the pre-dawn sky as a poignant reminder of the battlefields of Flanders in World War 1.

RSA president Tony Hill placed a wreath on the Cenotaph and then recited The Ode followed by the Last Post.

After the closing prayer, RSA members retired for breakfast at the Onyx to gather again two hours later for the parade to the Town Hall and the Commemorative Service.

Between the end of the Dawn Service and the parade, a typical Waikato fog had rolled in to make for an eerie atmosphere as the Cambridge Brass Band and Cambridge and District Pipe Band led participants into the Town Hall piazza. 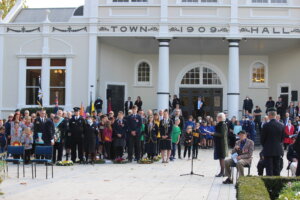 Cambridge Community Board chair Sue Milner who welcomed them, later said the turnout was a credit to the work the RSA was doing in the Cambridge community.

“They’ve worked very hard the last few years and have involved the children of servicemen which has made a real difference,” she said.

“They do a huge amount of welfare and they do cover all the wars.”

During the Commemorative Service, speeches were made by Cambridge High School head students Anna Smith and Samuel Kingston while Afghanistan war veteran Graham Johns was the guest speaker.

A stirring performance of Amazing Grace performed by the Cambridge Brass Band and Cambridge and District Pipe Band followed before the crowd returned to the piazza for the wreath laying.

The highlight came when students from schools around the district laid wreaths.

Millie, wearing her great grandfather’s medals and Barry were the two representatives of Cambridge Middle School to lay a wreath.

Millie, wearing her great grandfather’s medals and Barry were the two representatives of Cambridge Middle School to lay a wreath.

RSA members at the Dawn Service

We Will Remember Them.

A section of the crowd in the Town Hall during the Commemorative Service.