For the second time in a month, emergency services have been called to the Te Awa River Ride for a medical emergency.

On Saturday (April 16) the Cambridge Fire Brigade attended to a ride user who suffered a heart attack.

A woman on the Te Awa River ride required an ambulance earlier this month after an accident.

No further details of the latest event were available when The News went to press but the Waipā District Council has an emergency management plan which is still in draft.

How not to peddle a great yarn …..

A woman on the Te Awa River ride required an ambulance on Sunday morning after an accident.

We wanted information about how emergency services get to the new river ride, but getting organisations to tell us about it has been a struggle.

We knew an ambulance reached an injured woman who was on the river ride and arrived having travelled cross country from Cambridge Road through the St Peter’s School Owl Farm.

A Cambridge security company cut the lock on a gate allowing ambulance access to the newly opened ride.

The woman was taken to Waikato Hospital where she was treated and discharged.

St John said it assessed and treated one patient with moderate injuries on the scene but declined to comment further citing the Privacy Act. 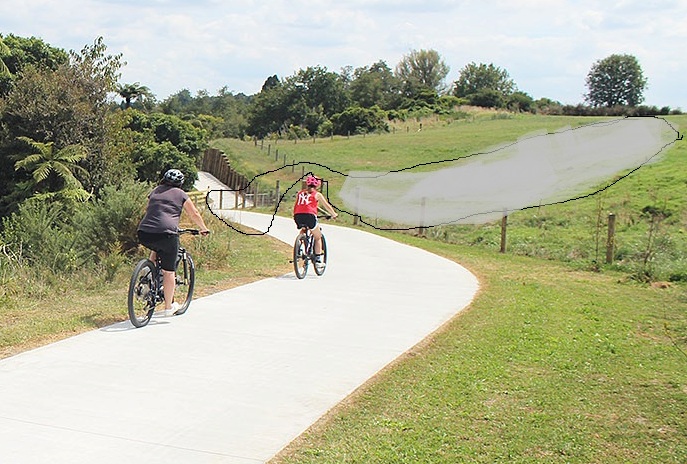 The part of the Te Awa River ride in this file shot where an ambulance gained access from the St Peter’s farm paddock.

We then learned the council was a key player in an emergency management plan.

We went back to the council where a spokesperson thought we were asking about the nature of the injuries to the person.

It turns out the emergency management plan for Te Awa River ride is still in draft at Waipā and a consultant is finalising it.

But Waipā did say the gates have a numbering system so emergency services and others have a reference point to “expediate” assistance.

This is St John’s Heart of Gold annual appeal week and chief executive Peter Bradley has called for the public to support it with a donation.

This story was an opportunity to show how St John has connected at a local level, with local authorities, to get access to injured people.

A good news story, it appears, has been hampered by a fear of breaching the Privacy Act.