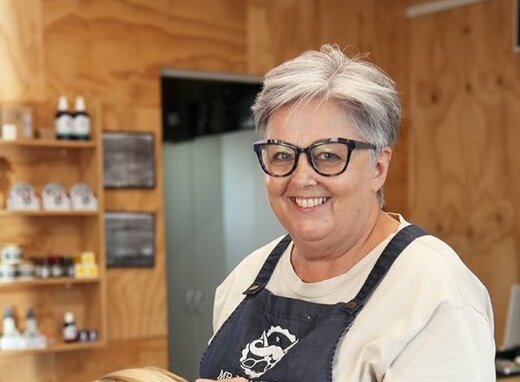 Cutting hair has never felt like work to Debra Jenkins.

But after running her Leamington barber shop for 17 years, the long standing Shakespeare St businesswoman has finally given her lease the chop and will continue to work part time.

“It’s kinda been emotionally hard, to have been barbering for 40 years and you think the last few years are going to be great but they’ve been the hardest, and it doesn’t necessarily end the way you thought it would,” she said.

Covid was a major factor in her decision to leave the salon last Friday.

“I was always planning to wind down, but I thought the shop would carry on with me here less,” she said.  “But that’s just not feasible really, with the uncertainty of it opening and closing all the time.”

Cutthroat Brothers barber shop, a business opened in Te Awamutu in 2020 by husband and wife team Tyrone Hunapo-Clark and Tangiwai Anderson, will move into the Shakespeare St salon.

Debra, from Wales, immigrated to New Zealand in 2000 and moved to Cambridge with her family in 2005.

She wasn’t planning to open her own salon here but bit the bullet after realising there were no barbering jobs on offer.

“I’d had a barber shop in Wales for maybe three years, but I wasn’t familiar with being in business in New Zealand so it was a bit daunting.”

She has been involved in organising many fundraising events, which have raised thousands of dollars for charities.

Debra said owning Mr Walter Barber had been “a really great way to become part of the community”.

“I’ve built some really good relationships and made some great friends here; it’s been awesome,” she said.

She now plans to do more walking with the Fat Bottomed Girls, spend extra time with her foster granddaughter and “get into gardening a bit more”.

Whatever the future holds, the Welsh import has found her happy place.