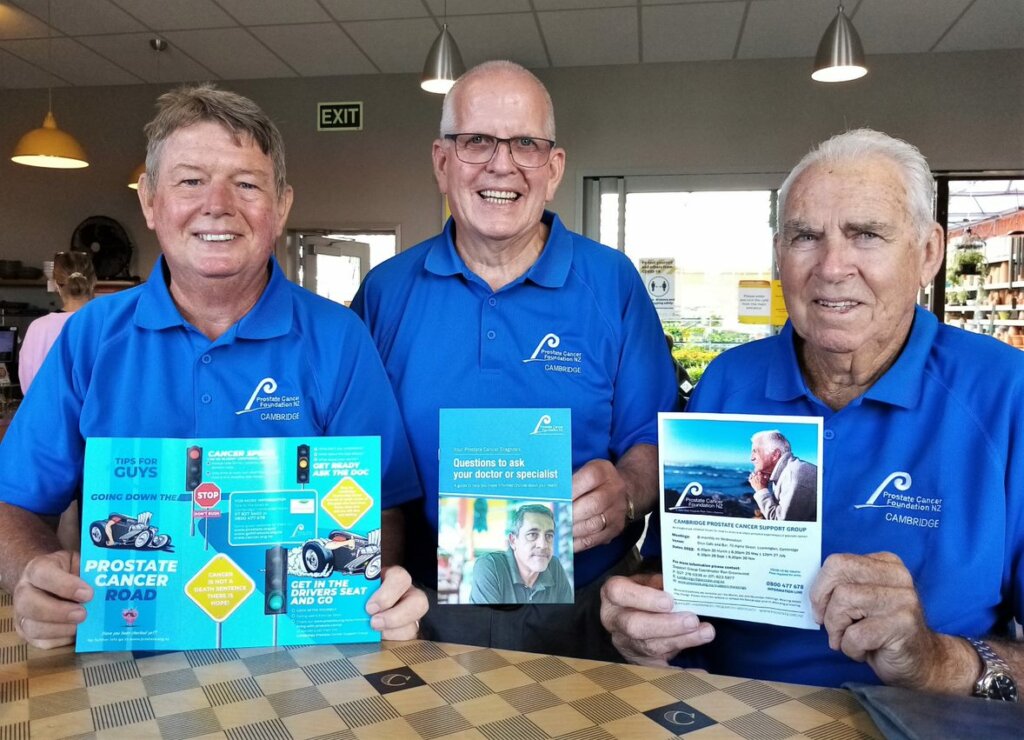 Cambridge Prostate Cancer Support Group stalwarts gear up for their next meeting, on March 30. They are, from left, Ken Methven, Doug Lineham and Ron Greenwood.

The Cambridge Prostate Cancer Support Group is broadening its reach in 2022 by increasing its use of social media.

The hope is that regular online posts will be viewed as a platform for support and information among those facing a prostate cancer diagnosis.  In many cases, said support group co-ordinator Ron Greenwood, the shock of hearing the diagnosis leaves people reeling and uncertain in the moment of what questions to ask.

“It may be only later that they wish they’d asked more focused questions … that’s where we come in,” he said.  “We can either provide information or direct them to someone able to help.  Our role is to make people aware about prostate cancer and to support the men and their families for as long as they need it.  If by doing that we can save even one or two men, we are doing our job.  We want people to know that you don’t have to die from this disease.”

Ron said that of the 3500 cases detected in New Zealand each year, around 650 men will die from it.  Those figures are on a par with breast cancer diagnosis levels among women.  One in eight men will develop the disease, with that risk increasing if there is a strong familial link to the disease.  It is the most common cancer among Kiwi men and the third highest cause of cancer death in men after lung and bowel cancer. More than 60 per cent of men have no symptoms when diagnosed, and Māori men are more likely to die of the disease once diagnosed than non-Māori men.

The local support group is one of 30 linked to the Prostate Cancer Foundation of New Zealand.  All actively urge men, and their partners, to be proactive in looking after their health, particularly as the disease is treatable if detected early.

Support groups are run by those who have experience of prostate cancer. They disseminate literature about the disease and hold regular meetings to encourage others facing the disease. Anyone is welcome to attend.

Cambridge has 46 men in its support group.  Doug Lineham is one of them – he’s the man handling the social media uptake and was diagnosed about three years ago.  He said there was little information readily available before he lined up for surgery. “I was ushered along the prostate highway … fortunately the outcome has been positive thus far.”

Another is Ken Methven, whose diagnosis came last year.  He was grateful for the validation the support group provided and said: “There were a lot of people there who had more information than I had … they provided the knowledge I needed.”

All are keen to give something back to others facing the same challenges.

While prostate cancer is central to their existence, the group also supports those facing testicular cancer.

More information, and details of an upcoming meeting on March 30, are from Ron Greenwood on 027 276 0336 or via cambridge@prostate.org.nz.