Purser swings in for St Peter’s One of Waikato’s top home-grown golfers has joined the St Peter’s School Golf Academy in Cambridge.

Mark Purser, 37, who grew up across the road from Hamilton Golf Club where the legendary Brian Boys coached him, replaces Reon Sayer who has moved to the Riverside Golf Club’s new Tīeke course at Mystery Creek.

Purser played extensively as both an amateur and then professionally from 2007 in Asia, Australia and the United States.

He has won professional tournaments in New Zealand and performed with distinction on the Asian Tour. He was a regular competitor at Waipā tournaments. 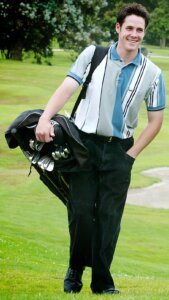 Purser is excited about the challenges involved in working at the golf academy and to front-line coaching, something he did at Prodrive Golf in Hamilton for four years.

The academy, established in the grounds of St Peter’s School in 2005 and led by Simon Thomas, has developed many New Zealand representatives and tour players with its holistic, tailored programmes.

Despite his success nationally and internationally, Purser never won his own club champs. Often, he had golfing commitments which meant he could not play and the one chance he had to win was two decades ago.

The then 14-year-old was “whipped” by his father Bryan Purser, a former national badminton champion, in the final.

Purser was part of a Waikato academy in the early 2000s, many gaining international honours.

“You could probably drill down as to why there tends to be more depth in terms of players than other times,” said Purser.

“There were lots of good tournaments around – 90 player fields plus a lot of the older players were able to compete because most tournaments were played over two days, 36 holes a day.”

The Australian Institute of Sport would send teams over to play in Cambridge and Lochiel.

“They had some of the best amateurs in the world at that time.”

Purser has played against and with some great golfers.

“I played once with Dustin Johnson in the United States.

“I was just blown away by how good he was. He had a unique swing – he hit very straight and very long. He was incredibly accurate for how long he hit it – the total package.”

Johnson is a former world number one and a two-time major championship winner. New Zealand Golf team 2006 l-r Mark Purser, James Gill and Josh Geary who played at the 2006 World Amateur Team championships in South Africa. Geary is the most talented New Zealand golfer Purser says he has ever played with.

“He’s got the grit and he’s still out there doing it. I’d really like to see him have some amazing success.”

His favourite overseas course is The Serapong course in Singapore at the Sentosa Golf Club while in New Zealand he rates Wairakei in Taupo and Titirangi in Auckland.

Purser is married to Alecia and the couple have two children Harrison, 7 and Gabriella, 3.