A different sort of summer is emerging at Mighty River Domain as campers, groups, picnickers and day-trippers enjoy a Lake Karāpiro made more accessible through the cancellation of major seasonal events.

December through January at the lake is normally heaving but shifting Covid-19 levels and the recent move to red in the traffic light system has seen almost all major events canned or postponed.  Many of the domain activities attract thousands of people, so cancellations result in the disappearance of huge numbers of participants, supporters, volunteers and the not insubstantial dollars usually spent across Waipā accommodation providers, restaurants and retailers.

Lake Karāpiro site manager Liz Stolwyk could be forgiven for losing sleep, but she is remarkably calm.

“We were lucky in many ways to have enjoyed a full season last year,” she said. “And while it is really unfortunate that we’ve had to cancel so many of the larger events this year, it’s been interesting to watch how people are using the domain in different ways.  Without the big events taking the place over, there is room for picnicking, swimming … so many people have come in with their campers or are using the accommodation.  Some are just enjoying the trees and the space in summer.  It surprises me to see how busy it is.”

The venue was still being used by some rowers in the interim, she said. 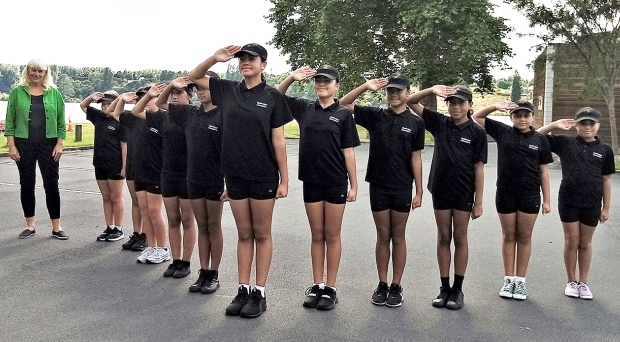 Hamilton’s Railfreight Cavaliers under 12 marching group, seen here with Liz Stolwyk, is one of several making the most of a quieter Mighty River Domain.

Nine clubs camped and trained there over the long weekend and New Zealand rowing trials would take place the week after the nationals.

Many of the cancelled or postponed events are over several days, and revenues at Mighty River – as with other venues – are significantly down,” Liz said.  “The reality is the cancellations cause losses around the region, beyond what is spent by the thousands of people they attract.  Events such as the Stragglers show channel their gate takings back into the community.  All that is lost, too.”

Some deft organisation meant Liz managed to squeeze in some sizeable weddings before the move to red, and a few smaller groups have stepped in to make the most of the unusual calm at the domain.

“We are heartened by what is turning out to be a bumper camping season. We’re luckier than many venues in that we have a range of accommodation options, the lake and parklands … people can enjoy the spaces even without events.

“It’s also giving us time we never normally have to do maintenance.  I’m optimistic things will turn around soon and, in the meantime, we’re making the most of a different opportunity.”

Meanwhile the Domain was busy over the long weekend with visitors including campers, rowers, picnickers and cyclists.

“It’s a relatively safe environment and I think people appreciate that,” said Liz.