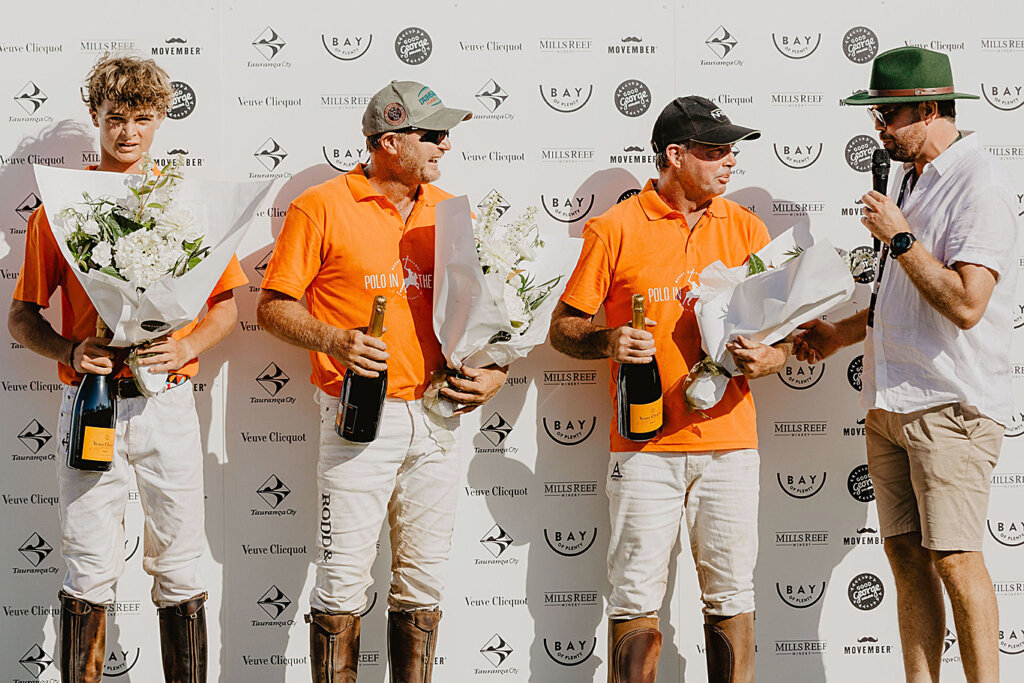 Te Akau father and son Jay and Tommy Wilson with Bruce Watson talking to commentator Ant Niterl after their Waikato victory in Polo in the Bay.

Cambridge’s Bruce Watson was part of the Waikato team which won the inaugural Polo in the Bay event at Baypark in Mount Maunganui on Saturday.

The event featured many of New Zealand’s most talented polo players from Auckland, Waikato, Bay of Plenty and Hawke’s Bay.

The format was different from traditional polo which is played on a 270m long field. The polo field at Baypark was half the size with hospitality areas within two metres of the field. Each ringside seat was able to follow the action.

The event was to have been held last November but was postponed till the weekend.

Organiser John Guise said the event was aimed at those with little or no knowledge of polo.

“When we created this event, we wanted the polo itself to be enjoyable for anyone, so that someone with zero polo knowledge could enjoy it.

“If you went to a traditional polo game, it may require some knowledge to follow it.”

Polo in the Bay is supported by two-year funding through the Regional Events Fund. The second event will be held later this year.

“Long term we are also looking to grow Polo in the Bay into a three-day festival. Once we have a programme over three days, visitors have more motivation to stay an extra night – that’s where the opportunity is long-term. It’s bringing more people to our region to spend and put back into our local economy,” said Guise.