History is in the cupboard… Cambridge High School library manager Glenys Bichan, left, and Cambridge Museum’s Kathryn Parsons, with a framed picture of celebrated old boy Bill Wells which is now out of the cupboard and will hang in the library archives. Whenever someone asked Cambridge High School library manager Glenys Bichan for some historical information about their time at the school, she would head to a “Harry Potter” like cupboard and begin the mammoth effort to find it.

Photos, magazines, newspaper and magazine clippings dating back decades were all stored there largely unseen and unavailable.

Pictures like that of Cambridge-born and bred Wing-Commander Edward Preston ‘Bill’ Wells who left New Zealand as a pilot officer in the Royal New Zealand Air Force. By January 1941 he was flying a Spitfire and had the best ‘bag’ in his squadron.

Wells, who died in November 2005, is arguably the most celebrated Cambridge High School student and had hundreds of articles written about his exploits.

But there have been other times the school has made the headlines, most notably from the late 1990s when Alison Annan was principal.

One decision in 2003 which still baffles Bichan was closing the school’s library because Annan said students were doing their research online and not using the non-fiction section of the library. She replaced it with a cybercafé and stored books in individual classrooms. Two years later, after Annan had resigned, the library named after former principal George Marshall in 1973, was restored.

Marshall who was principal from 1964 to 1972 and died in 2018 aged 93, left the library an endowment which Bichan is using to establish the Marshall Archives.

At last a home for the school’s history, she says.

Past students like John and Raewyn Dillon have helped catalogue the archives.

Another old boy Bruce Harvey, 90, who went to the school in 1946, visited last year and was full of inspiring tales.

“He was a living, walking Cambridge High School historical encyclopaedia.

“We just knew we needed to make our archives available to all our alumni and make sure their story was kept safe and accessible,” says Bichan. Former pupil and teacher Noeline Kidd is assisting to establish the Marshall Archives.

Something is missing though, and the search is on.

They cannot find a mounted shell case from the World War II Battle of River Plate, presented to the school by Rear-Admiral Richard Washbourn on 17 July 1964.

The shell is about 20cm high – but there are no known clear pictures of it. 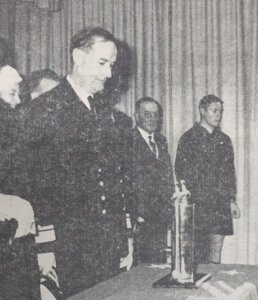 Washbourn, who won the Distinguished Service Order for his part in the Battle of the River Plate in 1939, became Chief of Naval Staff in 1963. It was in this capacity he presented the shell case to the school on behalf of the Ex-Navalmen’s Association in memory of past pupils who served in the two world wars.

When HMS Achilles opened fire on the German ‘pocket battleship’ Admiral Graf Spee on 13 December 1939, it became the first NZ unit to engage the enemy in the war.

Shaw, 27, was in the HMS Achilles Director Tower operating the sight setter ranging equipment that controlled the first of the six-inch guns. He was struck by splinters and died of multiple injuries to his chest and was buried at sea the next day. He was one of four New Zealanders killed in the engagement.

Marshall promised to value the shell case as a reminder of the toils and sacrifices of those who had gone before.

“Sadly it has been misplaced and we would love to see its return. If anyone in the community knows about this, we would love to hear the story and hopefully locate this meaningful artefact,” says Bichan.

If found, the shell case will feature in a formal opening next year.

Former pupil and teacher Noeline Kidd is assisting Bichan pull together all the archive information accurately.

Anyone else able to help can contact the school or email Bichan bic@camhigh.school.nz