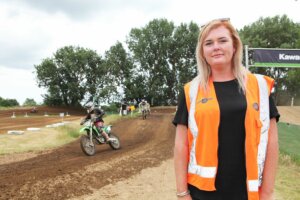 “We only ride here six Sundays a year between 9.30am and 4pm and you’re giving enjoyment to hundreds of people, to little kids that will remember the day for the rest of their lives,” he said at the club’s final meet at the end of November.

“It’s getting kids off iPads and out of bed by seven o’clock in the morning, just giving them a purpose.  I’ve got a daughter who’s 15 and like most teenagers she spends a lot of time on her phone on the different social media platforms, so having a facility like this that gets kids and teenagers out of the house at 7am closing down, that’s what I’m most gutted about.”

Cotter, who has lived in Cambridge all his life, grew up on a dairy farm 3km away from the track and rode there for 40 years.

His daughters Caitlin (15) and Emma (11) have both been racing there since they were about seven and his father Norm Cotter was club president for “20-odd years” and a CMC life member.

“Three generations of Cotters have come through this particular venue, this track,” he said.

However, the motorcycle club’s resource consent to operate at the site lapsed last month because neighbouring land had been rezoned for residential development.

Cotter said the club had been fighting to renew its resource consents for close to 20 years and “knew this day was coming”.

“To be honest I’m pretty surprised we got this far, 2021, considering we were supposed to be closed in the early 2000s with all the subdivisions happening,” he said. 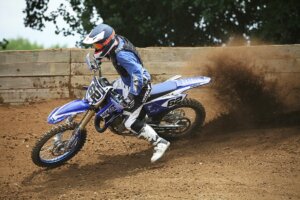 Brian Love rips around a corner at CMC’s Rowling Place track, which is now closed.

“It is a shame and I would’ve thought potentially the councils or someone could have worked harder to negotiate with some of those neighbours etc, but at the end of the day we are in the middle of town.   There’s no other track like this in New Zealand that’s in the middle of suburbia, so I suppose it’s just progression.”

He remembers riding in the 1980s, back when the area was “just wasteland”.

“The track was open 24/7, people could come down here any day or night…there were no restrictions,” he said.  “Unfortunately obviously town’s grown around us.”

He said finding another permanent venue was “probably going to take a lot of work and money”.

“That’s the hard part because this is all volunteer-based and most of the money the club makes goes back into the venue.  It’s not a wealthy club and land is ridiculously expensive, so yeah, we’re going to need some generosity from landowners or if the council can help us out.

“We don’t have anywhere permanent to go to yet but we are working on some things.”

His wife Deborah is worried the track’s closure might deter their youngest daughter from carrying on with the sport.

“I was sitting over at the mini track yesterday watching these rows of little kids all lined up thinking how sad it was that they’re going to lose the venue,” she said.

“Where are they going to go now locally?”

CMC spokesperson Loren Stockley said the club had about 200 members, more than half of them juniors.

She said the track’s closure meant right now there were “not a lot of options for kids starting out in motocross in the central North Island area”.

“Our minis track has always been described as the best beginners track out there for getting into motocross,” she said.

People came from all over North Island to ride at local events and the track’s closure would affect local businesses.

She said the club had received huge support from the local community over the years.