The first rounds of golf have been played at New Zealand’s newest golf course situated in the Waipā District.

The $15 million Tīeke Golf Estate is the former Lochiel course renovated over three years for the Riverside Golf Club by Phil Tataurangi and Brett Thomson of Mahi Tahi Golf Project.

Two of the country’s most experienced golf operators are in charge at the course.

Waikato golf identity Warren Collett, who was the Lochiel club manager from 1998 to 2007, started as part time golf manager at Tīeke in August.

He had successfully managed North Shore and Manawatu golf clubs and was planning on a quiet retirement when the Riverside board asked him to help. On the site adjacent to Mystery Creek Events Centre is a redesigned 18-hole championship course and a new club house. It reopened yesterday (Wednesday) with more than 30,000 native plants back in the ground after the removal of hundreds of old trees and shrubs and the uncovering of sandy soils which sat dormant underneath the turf for more than 25,000 years.

“Tīeke is a spectacular achievement, an incredible new course and one that is going to rate highly in New Zealand. There is already great anticipation and huge demand to play Tīeke and it will very quickly become a must play course for golfers from everywhere,” said Ellis.

Ellis recently moved to Cambridge from Pauanui with his wife Cushla and children Michael and Sarah. His company Pacific Golf Management have managed the golf operations since September.

The Tīeke Golf Estate is named after the ancient North Island saddleback which was once widespread across New Zealand but declined in numbers during the 19th century because of forest clearances and introduced predators such as rats, cats and stoats. 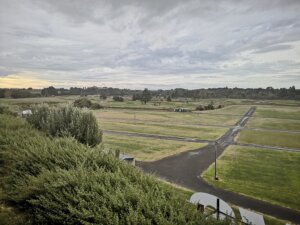 Tīeke numbers are on the increase in Sanctuary Mountain Maungatautari and the Riverside club has formed a unique conservation partnership which will hopefully see the member of the wattle bird family return to the Mystery Creek area.

Riverside Golf Club was formed from a merger between the Narrows and Lochiel golf clubs in 2014. Not long after Waka Kotahi (New Zealand Transport Agency) designated several holes at the Narrows course as part of the proposed Southern Links Expressway.

After a lengthy settlement, the club sold Narrows for nearly $20 million enabling the investment to take place on the former Lochiel site.

The Narrows course will close in April and ownership of the land revert to Waka Kotahi. It cannot be used for golf.

“When I first heard about the renovation taking place at Lochiel, I was interested to see the changes. I didn’t expect to see an entirely new course and club house. It’s not just a new course but a fantastic development and a golf course unlike any other in New Zealand,” said Ellis.

“I’ve been involved in the start-up of a number of international golf courses, the Tīeke course and clubhouse is extraordinary and I know once the members play the course, they will be very proud to be part of what has been created ‘One of the best courses in New Zealand’.”

Ellis said his number one tip for golfers playing the course was to “practice your putting.”

“There will be no excuses you have one of the biggest practice putting greens you will ever see,” he said.

The big undulating bent grass greens and their surrounds will test golfers’ putting and short game skills and most players will find it is the bad chip shot and three putts that blow the score out, said Ellis.