Opinion: The burden of our beast 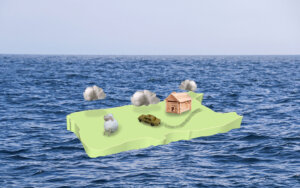 This has been a week of both error and revelation.

After the recent lengthy lockdown we set off southwards last Wednesday to catch up with Wellington-based families.  All was good with the world as we wound our way towards Port Nicholson, with an overnight stop at the southern end of Lake Taupo.

The following morning, after an early start, we stopped for breakfast at a long-supported café in Taihape. All was still good with the world as we started to pull out of this Rangitikei town.

And then the fun started. The engine of our large white beast went into ‘crawl’ mode. Luckily a hazardous slow-speed 180 degree turn and a crawl up the hill brought us back to Taihape to start enquiring about diesel mechanics.

We soon learned a fuel injector was in need of surgery, the part was not available and as the engine was still in warranty, the vehicle had to be handled only by the representative of one of the world-leading vehicle manufacturers. A phone call to Whanganui revealed a two-week backlog, Palmerston North had one. So with the somewhat miserly support of the insurance company we arranged a tow to the city which resulted in a smart vehicle arriving two hours later to haul the mobile home onto its back.

But what about us? Luckily a connecting bus was only an hour away. And then the fun started. What eventually transpired between us (and the very helpful I-Site manager), and InterCity should be recorded for posterity as to how poor a service exists. In fairness the people at the head office of that company tried hard once we fought our way through a most unhelpful phone reception area and engaged the services of a supervisor. He attempted several times to phone the bus driver who clearly was not in receptive mood, so it was not possible to ask him to stop and pick up the two stranded and somewhat elderly prospective passengers.

With the helpful assistance of the operator at the local BP we found a dial-a-driver in Taihape who agreed to take us to Palmerston North for a very reasonable price.

We left the van at the vehicle centre to be dealt with ‘next week’ and were rescued by a daughter who drove up to take the distressed couple, clothes and food towards Wellington… where it has not stopped raining since.

While here in the south of the island we have become engrossed in discussions regarding the have and have nots. I am talking about the dichotomy between those who have been double-vaccinated and those who have chosen not to be so.

I have a concern for the stress on people who are driven to retreat within their four walls and possibly descend into anxiety and depression. Life in retirement villages is descending into a two-tier culture which is abhorrent, unfair and in some cases unmanaged.

In a number of villages the management are trying very hard to take a reasonable line. That said, someone has to speak up for those to whom needles, unknown vaccine contents and an ever-changing set of government driven rules are creating a morass of uncertainty.

And we came away for a holiday to get away from all this!!