When Matthew ‘Matty’ White was a boy, all he ever wanted to do was drive horses for a living.

Now the 37-year-old Cambridge trainer and driver is living the dream notching up victories galore on the track, the latest coming on Tommysonaroll at Cambridge Raceway last week.

White guided the Auckland Reactor gelding away smartly from barrier one and quickly took him to the lead in race two, the Dunstan Recovery Mash Mobile Pace, before taking a trail. From there he received a beautiful trailing spot and proved too good up the lane.

It took White’s training victories for the season to 15 from 123 starts and his wins as a driver to 29 from 302 starts.

White, who was born and brought up in Cambridge, used to work while he was still at Cambridge High School in the legendary Tony Shaw’s stables.

He stayed at high school till the end of Year 13 not for any major academic reason, he hastens to add, but because the school’s first XV had a rugby trip to Australia and he was their star flanker.

Fresh out of school, White moved to Pukekohe to work as a junior driver with Brian Hughes and John Green.

Training horses was not something he thought about till much later. As a junior and then open driver, he notched up 133 wins before moving to Western Australia in 2010 with his now wife Brigette.

There he linked up with Andrew De Campo, one of Australia’s top trainers in Capel, 200kms south of Perth. The two first got to know each other when White was 19 and he spent a month working in De Campo’s stables.

There were more drives for White in Australia; four or five race meetings a week on all-weather tracks.

White started his training career alongside De Campo before going out on his own to train 76 winners.

White and his wife returned to New Zealand in 2019 to train in partnership with Mike Berger at Cambridge Raceway.

“Mike and I had always kept in contact and he was winding down and looking for someone. I’d worked with him before.”

White secured his first New Zealand training win in partnership with Berger behind About Turn in November 2019 but then early last year he was involved in a horrific four-horse race crash at the raceway when aboard Mach Little Soaky.

One of the leading horses spooked around the first turn which resulted in White and another driver being flung from their carts. Both drivers were knocked out.

White sustained bleeding on the brain, a concussion, and three fractured vertebrae, which resulted in his absence from the track until March. He was quickly back in the winners’ circle as both a trainer and driver.

“It was lucky it wasn’t any worse.”

While he had been in other accidents before, none as bad as this one. He was back in the sulky within six weeks.

“There was no real fear getting back on or anything, it was straight back into the groove.”

Covid presented many challenges – there was no racing for two months and when it returned, it was without patrons.

“I feel a bit sorry for the owners who can’t go to the races, that’s what it is all about for them.”

The training partnership between Berger and White finished at the end of the 2019-2020 season and only a month into the new season in August last year, White had his first solo training win when Carse O Fern Tom took out the Oktoberfest, 3rd October Mobile Pace (2200m) at the raceway.

White now has 14 horses in training. He also breaks horses in for owners.

It will be yet another busy week for Matthew White Stables – one horse will head down to Manawatu for a meeting tonight (Thursday) while others are heading for Alexandra Park in Auckland tomorrow.

Any of them worth a tipple? The News asked on behalf of readers.

Thee Old Bomb, third at Cambridge last week and third a fortnight before that in Auckland, is worth looking at. Overdue for a win, says White. 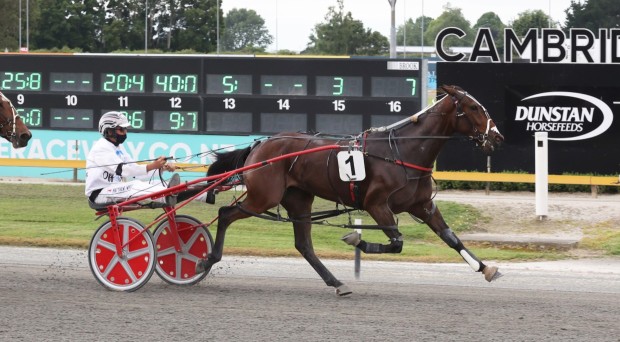