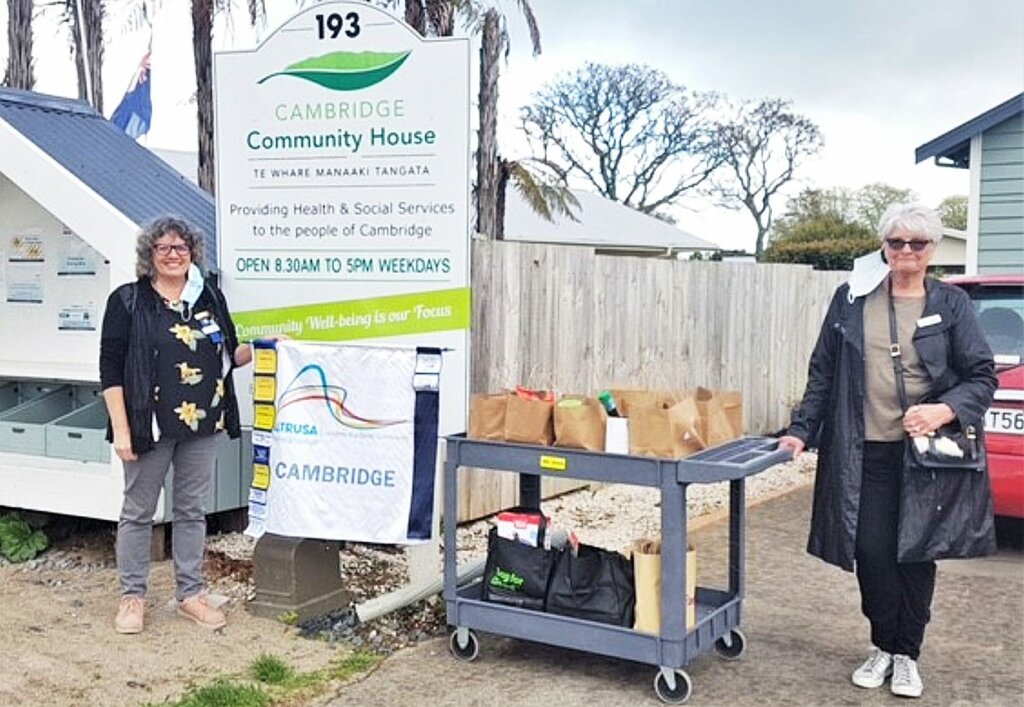 Members of Altrusa International Cambridge presented a timely donation of food to Cambridge Community House (CCH) this week in acknowledgement of World Food Day on October 16.

The delivery of non-perishable food to the organisation was welcomed on Monday by CCH manager Harriet Dixon.  She said the Community House was currently 65 local families each week with food.

“That’s a huge increase as lockdown level 3 further affects our community. We are seeing many families struggling to put food on their table and have local parents stating that they will go without to ensure their kids can eat.  This is an awful position for families to be in. They don’t want to ask for help for fear of being judged and feeling shame – we take those feelings away by providing food and offering wrap-around support services to help them back on their feet,” she said.

“There is no judgement at CCH – no shame in reaching out for support at this extremely difficult time.”

World Food Day is marked on October 16 each year to commemorate the founding of the United Nations Food and Agricultural Organisation in 1945.

The date is also observed by organisations like the World Food Programme and the International Fund for Agricultural Development.

“Each year, Cambridge Altrusans collect tinned and dried food for donation to a selected organisation,” she said. “This year, we decided to give it to Cambridge Community House. We have helped them with funding before.”

The local group belongs to an established network of clubs linked to Altrusa International in the United States.  The service organisation was founded in 1917, with education and literacy as one of its main focuses.

The Cambridge club raises funds each year for distribution among a range of community organisations and for many years, its members have assisted residents at the Selwyn St Andrew’s Retirement Village, lending a hand with shopping or other outings.

De-ane said the club was seeking to boost its membership numbers. For more information contact De-ane Busby on gdbusby@xtra.co.nz, or president Maureen Blackstock at president.cambridge@altrusa.co.nz.