15 years and counting for Rachael 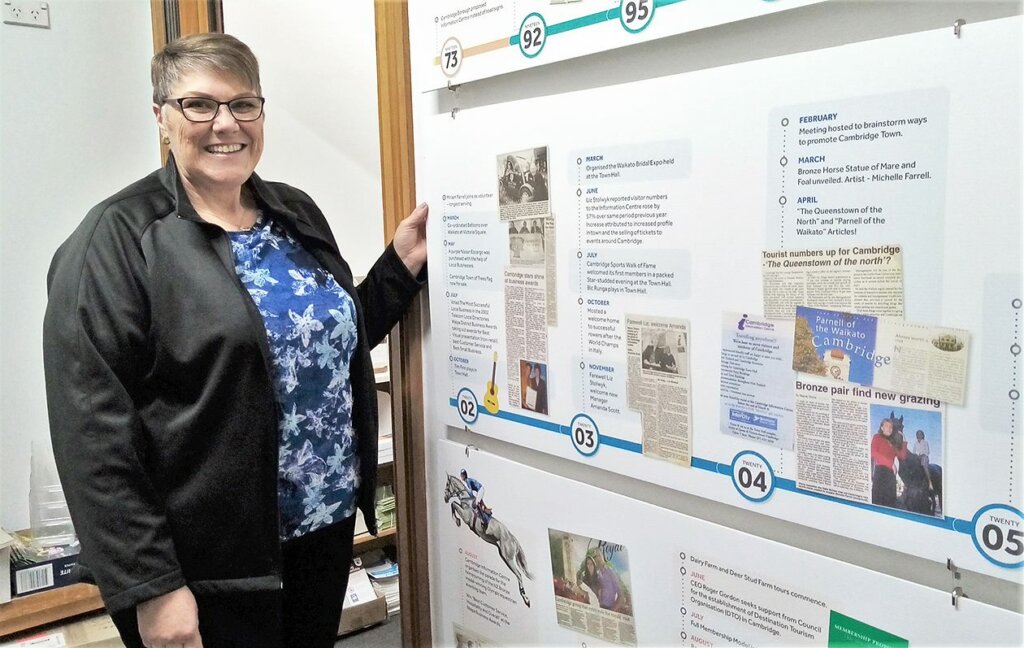 Forty years living here and 15 years working at Cambridge i-Site has secured Rachael Colgan’s position as one of the town’s most enthusiastic advocates.

Last year, she was dubbed a ‘walking encyclopaedia’ by Destination Cambridge’s CEO Miff Macdiarmid, and Miff’s predecessor Roger Gordon is known to call Rachael ‘the oracle’.

Her 15th anniversary with the organisation was celebrated recently at the back of the Cambridge Hall, a place that is almost Rachael’s second home.  She loves the building for personal and professional reasons.  Her wedding reception was there in 1988, and it was central to one of the highlights of her career – the 2014 visit here by the Duke and Duchess of Cambridge.  Rachel knows each of the 112-year-old hall’s nooks and crannies, and even as she hopes for an exciting new future for the building, she busies herself with meeting today’s needs.

“We do the management of the hall, and book all the events … it’s still pretty well used. I’d like to see it brought up to date and used even more by the community,” she said.
Rotorua-born and educated in Auckland, Rachael moved to Cambridge with her family as a young woman. She had been working with the post office at St Heliers and got a transfer to the Cambridge post office.  Later, she took time out to have her own family before applying for a job-share position at what is now Cambridge i-Site.

“I liked the idea of going back into customer service … and I wanted some work/life balance, so it suited me well.”

That work/life balance includes travelling around the country with husband Joe, usually to spots well off the beaten track, and fitting in as much swimming as she can.

Things have changed a fair bit during Rachael’s 15-year tenure.  She has worked with five managers – Jenny Wilson, Maree Kaati, Rebecca Foy, Roger Gordon, and now Miff Macdiarmid.   They have learned to be ‘nimble’, running ‘pop-up’ information tables at various events and tackling the onslaught of technology head-on. Where contact and bookings were once done face-to-face, much of the job has moved online.

“Time, and of course Covid, has made a huge difference.  We once had a pretty even 30/30/30 split with local, domestic and international enquiries. It’s currently only local, and when we’ve had to close the office due to lockdowns, we simply moved online,” she said.

The expansion of retail at i-Site has happened on Rachael’s watch.  The annual Christmas Parade has grown like topsy and numerous other tours and events introduced, such as the Hobbiton bus tours and Culinary Cambridge.

The job is as changeable as the times. “I love it … the variety of people you end up meeting, never knowing what the next thing is.  That what makes it so good, as far as I’m concerned,” said Rachael.