Time runs out for horologist 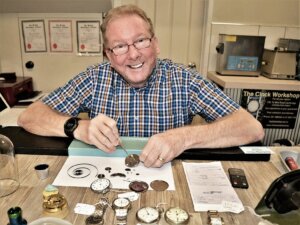 Roger Jennings in his happy place, tinkering with the minutiae of timekeeping.

In Roger Jennings’ world, there was scarcely a stopped timepiece he couldn’t re-start.

For more than five decades, he thrilled at the precision workings of clocks and watches.  Big or small, he loved them all.  Everything, he said in a mid-2017 interview among his extraordinary collection of watches, clocks, metronomes, music boxes and barometers, just ‘comes down to scale’.

Time ran out for the passionate horologist on August 31.  Roger died at Waikato Hospital on that Tuesday, with family at his bedside. He was just 71.
Barbara, his wife of 50 years, said it was too soon, and Roger the husband, father and grandfather, would be deeply missed.

As their son Simon mustered his thoughts for a funeral service yet to be held, he summed his father up with the words ‘courage through adversity’.  Roger hadn’t been in the best health for the past eight months, and an admiring Simon acknowledged his mother’s devoted nursing: “It’s been a hard struggle. She’s the most resilient woman I’ve known.”

Roger was known for his generosity, love of family and his humour.  Simon’s words alluded to the tough break his father had as a boy, one that never defeated him.

Roger was born in England, a ‘bubbly boy’ who was the youngest of three.  At age 12, he was diagnosed with a hole in the heart, but the development of a blood clot during surgery resulted in Roger requiring urgent resuscitation and cost him his leg.

“It changed his life forever, but I can see how it drove him to be better at everything he did,” said Simon. “He had to re-learn how to walk, albeit with the aid of heavy 60s prosthetics which were never well fitted and gave him sores. But he persevered.”

At age 16, he started a five-year apprenticeship with the British Horological Institute, then underwent further study in watchmaking and silversmithing.

By the time he met Barbara in his early 20s, his future was set.

The couple married in 1971, and two years later set out for New Zealand. He and a friend established a successful jeweller/watchmaker business in Paeroa, but the Jennings’ were back in the UK a few years later for family reasons.

They returned in 1986, settling eventually in Cambridge. Roger spent 22 years running what was then Jennings Jewellers, an outfit that won the Top Shop award in its first year of operation and is now Cambridge Jewellers.  Thoughts of a quieter life saw him sell up in favour of establishing The Clock Workshop amid the leafy surrounds of the home he and Barbara built at Te Miro.

There was more to Roger than timekeeping.  He loved cars and boats, photography and golf, and played the drums.  He was as funny as heck, Simon reckoned, and would sneak off with the grandkids in search of lollies or spent time teaching them fishing.

While in England, Roger was involved with Round Table activities that raised funds for hospitals and other projects.  He demonstrated similar empathy here, supporting a Waipā Paralympian, helping a young Chinese watchmaker gain residency and offering up the Roger Jennings Cup for courage at Cambridge High School.

Simon described his parents as a ‘formidable business team’. He recalled his father’s involvement with the local Chamber of Commerce.
“He managed to give it a boost by helping organise promotions. He even did a car giveaway in Cambridge… something that hasn’t been done since.”