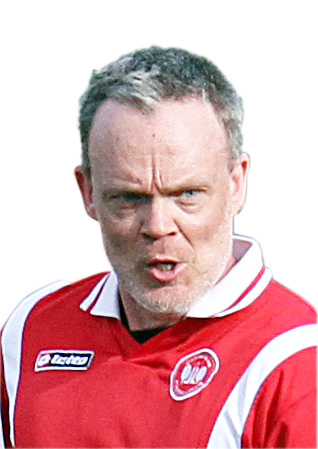 Actor and musician Joel Tobeck, who has carved out an illustrious career in the USA, Australia and New Zealand, wants to put a one-man show on at the Cambridge Gaslight Theatre.

He could test the audience and see if they liked it, the 50-year-old star of One Lane Bridge, currently airing Sunday night on TVNZ1, told the News recently.

And before you think this is some pretentious Hollywood prima donna, Tobeck has lived in Cambridge since 2006 when he and his wife Yvette moved from Auckland.

It is a move he has never regretted as it offers him the opportunity to travel for his work while always able to return to home base in the “mighty Waikato.”

“It’s different to Auckland. I grew up in Auckland and it’s very trendy (now).”

Cambridge people are “salt of the earth and don’t take any bull***t,” he says. Joel Tobeck in action for the Red Devils in 2014 at John Kerkhof Park in Cambridge. Photo: Grant Stantiall

“It’s a great town. I do love coming home and chilling out really. The hustle and bustle of an Auckland, or a Melbourne or an LA (Los Angeles) can be quite full on. Everyone’s really nice here, a solid community, a beautiful area.”

The couple have two daughters and a son; the younger two aged 13 and 15 are still at home.

“I love it here. Fortunately for my kids they’ve got used to me always travelling for work.

“My wife is a great foundation setter and a great home maker, so they’ve had a great comfortable time.”

Tobeck was already something of a household name when they bought their house in Leamington 15 years ago. House prices in Cambridge were much cheaper than those in Auckland plus Yvette’s parents lived around the corner. Handy having the in-laws nearby, he says.

Tobeck has become a huge Chiefs fan and since 2014 has turned out for the Cambridge Football Club’s Red Devils Sunday social team. He plays for the over 35s on a Saturday.

“I hadn’t played for years, and I went out to the club for a New Zealand football match exhibition.”

Club stalwart Josh Easby saw him and asked Tobeck if he was interested in playing for the Red Devils.

“My skill level is not as good compared to the other guys who have kept it up these last 45 years.

“I don’t spend a lot of time playing, if I’m working, I can’t play (because) if I get injured, I’m in trouble.”

He started off in the midfield before moving into the striker’s position.

“The irony is I’ve scored more goals playing for Cambridge than my whole time playing in Auckland.”

Among those goals was a hat trick against a Hamilton club.

“I was blown away by that.”

Tobeck was born into an acting family and made his first stage appearance aged five with his mother, the late Liddy Holloway. The pair later both appeared in Shortland Street.

Tobeck then picked up work in other television shows and movies including Hercules, Xena: Warrior Princess, Power Rangers, The Lord of the Rings: The Return of the King and Sons of Anarchy. He has also worked as a singer and guitarist over the years both in New Zealand and Australia.

“I mix my (acting) roles up a lot. In Australia, I’ve played a lot of politicians, in America I was always the bad guy who wants to kill everybody.”

He has no issue about being type cast, regularly taking roles that match his rugged features.

“Luckily my face is holding up and the rugged look is popular. I tend to play the same sort of roles a lot but I’m not complaining, it’s a lot of fun.” Covid 19 slowed down but did not halt his acting career. When the first lockdown came, he was part way through filming Black Hands, the television series about the Bain family leading up to their tragic murders in Dunedin in 1994. Tobeck played Robin Bain, whose eldest son David was found guilty of the murders of the five other members of his family and was later acquitted at a new trial in 2009.

The series was completed post lockdown last year followed by the second series of One Lane Bridge. Filming on that wrapped in March.

In between, Tobeck – who does regular voice work for radio and television – teaches acting and drama in Auckland and online.

The teaching is something he enjoys. Students are mostly adults aged 18-45 years.

“A lot of the older ones have had regular careers, they’ve raised their children, their children have left home say and they think it’s now time to want to have a go at. They don’t always want to be actors. A lot are out to get more confidence and try something new. And then there’s others who do want to be actors,” says Tobeck.

“Learning a skill, whatever it is, takes practice and to master it takes a lot of practice.

“Having a creative streak inside you and developing that from an early age is really important. Just for a bit of balance in the world. Actors and dancers and I guess artists have always been thought of as less important I suppose in some ways. Being creative is pretty cool.”

Tobeck is a keen cyclist often seen riding around the town. The family go for lots of family walks and bike rides. Karāpiro is a particular favourite.

Post Covid, he hopes to be able to return to Australia, a country he has not worked in since 2018.

“I love Australia and I love working there. I just got busy working here and never got back. Hopefully it will happen soon.”

Asked whether he had ever considered appearing in any Cambridge Repertory Society productions, Tobeck instead talks about how he would love to put on a one-man play at the society’s Gaslight Theatre.

And his interest is further piqued when The News reveals a newly formed Cambridge Town Hall Community Trust wants to “reactivate” the Town Hall and its upstairs theatre.

“That’s a lovely venue,” he muses.