Getting over the hump The Bakers have run the business since taking it over in late 2019.

A small Waipā farm is catering for a growing demand for raw milk.

Humpbridge Milk, which opened in 2018, has become a popular service, giving customers an insight into milk production.

The self-serve shop and 8.4ha farm is on Pokuru Rd about 2km south of Te Awamutu — just past the ‘hump bridge’.

The business was stared by Mike and Chris Richmond but in December 2019 Donna and Derek Baker took over and have slowly grown and put their own mark on the business.

“We were able to just walk in and carry on as the previous owners had done a great job to set everything up, but slowly we are putting our own mark on the place,” Derek said.

Since their take over, they have increased their herd from 12 to 14 cows and have grown their customer base as far south as Taumarunui.

They say most of their customers have lived on farms and grown up on raw milk, but more people are wanting to give it a try and learn more.

Humpbridge Milk is registered and approved by Ministry of Primary Industries (MPI) and its product is subject to regular testing, reports and auditing.

Raw milk is promoted as providing more benefits than regular milk because it contains more protein, calcium and vitamins and can reduce blood pressure and lower the risk of osteoporosis.

“Anyone who has come out here for the first time and hasn’t tasted raw milk before always seem to come back,” Derek said. 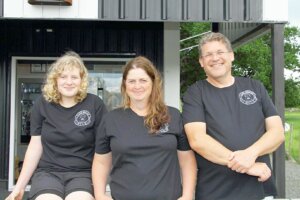 The Humpbridge team, from left, Casey-Lee, Donna and Derek Baker.

Covid has presented a raft of challenges as the business approaches it second anniversary.

“Originally, we were able to be open in level 4 but then MPI decided to classify the vending room as a pickup point and therefore had to be closed for level 4, but could open in level 3,” Derek said.

He said MPI would have allowed contactless door to door deliveries in Level 4 but as they weren’t setup for deliveries, they remained closed during that period.

But as they slowly return back to normality again, they are just excited to see their customers come back.