Long-serving Waipā District councillor and former deputy mayor Grahame Webber will not stand for council next year as he battles myeloma cancer. 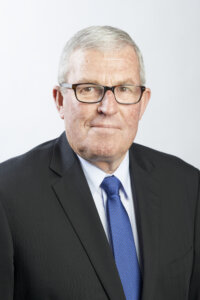 Webber, 73, was first elected to the council in 2001 and is two years into his seventh term. He first represented the Maungatautari ward and five years ago, after he and wife Jenny moved into town, the Cambridge ward.

He served four terms as deputy mayor before handing over to Liz Stolwyk two years ago and currently chairs the Service Delivery committee.

Webber grew up in Te Awamutu, the oldest of seven children, attended Te Awamutu College and then moved to Hora Hora 56 years ago when his parents bought a farm there. He farmed at Maungatautari for more than 30 years.

His cancer battle involves having chemotherapy every week at Waikato Hospital and regular blood tests.

Myeloma, also known as multiple myeloma or plasma cell myeloma, is a cancer of plasma cells that usually arises in the bone marrow.

Tragically Webber’s brother and sister both died in the past two years.

“I’ve got 40 weeks of chemo treatment ahead of me and I’m going to be looking after myself.”

He will be talking to people he wants to see put their hands up for council.

“Liz (Stolwyk) was a prime example. I was on a plane with her to our Bihoro our sister city in Japan when I asked her to put her name forward for the council. And look how well she is doing.”

The other person Webber says he convinced to stand in Maungatatauri, when he stood down, was Elwyn Andree-Wiltens.

“She is the best person in the job for Maungatautari,” he said.

Webber has few regrets about his time in local government and points out how well Cambridge has done.

“When I came here, Cambridge had 5500 people. I’m thrilled to bits with Cambridge now. If we (council) hadn’t done what we’ve done in the town, we wouldn’t have the people coming here now.”

The district was attracting the same sort of industry as Hamilton and with that comes jobs and economic growth, he said.

His major focus has always been on his constituents.

“I just don’t like spending a huge amount of money on things. It’s ratepayers’ money.”