Recycling by the tonne A group of volunteers working in Te Awamutu and Cambridge have this year diverted 8.5 tonnes of e-waste from Waipā’s landfills.

Urban Miners, a not-for-profit enterprise recycles, or diverts for reuse, domestic and business e-waste in the district.

The group of 45 volunteers runs collections from 9am to 11am once a month in both towns – the first Sunday in Te Awamutu and the third Sunday in Cambridge. It is not a free service.

Ninety per cent of the e-waste Urban Miners has collected since it started last year has been recycled. The group wants to stop 20 tonnes a year going into landfills.

About 80 per cent of all e-waste ends up in landfills wasting useful resources and releasing toxic chemicals, says group spokesperson Mark Hanlon.

When the e-waste ends up in landfills it is an environmental disaster for the district.

Urban Miners is supported by Cambridge Rotary, the Waipā Waste Minimisation Fund and the Cambridge Community Board. There volunteers strip out what can be reused. Metals, glass and circuit boards are supplied to willing partners while any items which could be resold go to Cambridge Lions Club for its second-hand shop.

Upston told her Facebook followers she supported Urban Miners saying it provided a valuable service to the community.

“When you’re given an alternative to do something with your e-waste, it’s important to do the right thing,” she said.

“What else can you do with it?”

Most people have no qualms about paying Urban Miners to take their e-waste away. One man brought printers, laptops, LCD monitors and mobile phones to the collection and willingly paid $200. A woman was not so happy about paying $10 for a radio/tape recorder to be taken away as e-waste and hurriedly drove away.

“I don’t like putting things in the dump,” he said.

The project was recently highly commended in the Waste Minimisation – Environmental Award at the 2021 Waipā Business Awards. 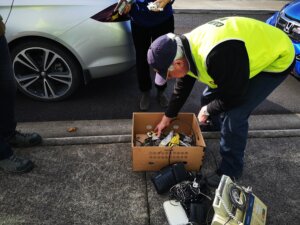