Ollie will wing it…

A “plucky little bird with a mangled leg and twisted body” from Cambridge is set to become the first cockatiel to attempt to traverse the length of New Zealand on Te Araroa, a continuous 3000km walking trail stretching from Cape Reinga to Bluff. Ollie was hand raised by Robyn Chappell from Bird Rescue Cambridge after his father attacked him in the nest as a young chick.

“He was in very poor shape, bloodied, missing bits of his head, his eyes were black and bruised, and his leg had been dislocated and twisted backwards,” Robyn said.

“We were going euthanise him as he was so mangled but decided to let him die in his sleep in the comfort of a warm bed.  But he didn’t die and grew stronger each day.”

Now 18 months old and resolutely refusing to let his disability clip his wings, Ollie is “cheeky, clever and determined”.  His leg still faces the wrong way, but he can hop around on his good leg, fly short distances and talk.

Having overcome the many challenges life has already thrown at him, he is now preparing to leave the nest in September and head to Cape Reinga to begin walking Te Araroa.

Robyn, aka “Hooman Number 1”, who has never hiked or tramped in her life, will be helping him go the distance, transporting him in a special backpack and a shoulder harness.  The pair will sleep in a small tent and DOC huts along the way.

“I’m unfit, overweight and inexperienced, but still have my health, faculties, and teeth – so that’s a good start,” said Robyn, who describes herself as “no spring chicken” and “geographically challenged” and finds the idea of navigating 3000km rather daunting.

But it’s all about Ollie, she says, who will be raising awareness of the trail and its value to New Zealand, while raising money for the Te Araroa Trust. 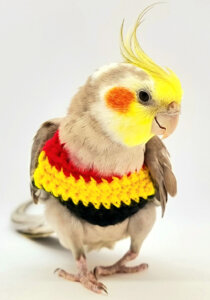 She says while Ollie is not asking anyone to swan dive into their nest eggs, he is hoping a few good eggs will donate a few dollars through his Givealittle page, https://givealittle.co.nz/cause/ollie-the-cockatiels-journey-from-cape-reinga.

He’s already begun strutting his stuff through his own Facebook and Instagram pages, where he will be sharing a bird’s eye view of his adventure.

Already proving his social media savviness, on July 28 the sassy cockatiel appeared in an original fashion creation by “Cambridge’s crochet queen” Jill Smith – a stylish pink hiking vest designed to keep his chest warm during wild, windy days out on the trail.  A few days later he was captured sporting a new superbird vest and cape, describing himself as “a vision of unbridled avian masculinity”.  And this week he was shaking his tail feathers in a gorgeous black number embellished with a silver fern in support of our Olympic Kiwis, who were “really something to crow about”.

Ollie hopes his mammoth hike will inspire all birds, “hooman and feathered” to “get off the couch and go for a walk”.