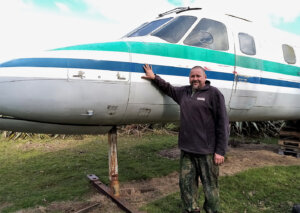 Tauwhare Military Museum in Pukemoremore has been saved from closure thanks to an eleventh-hour lifeline thrown last week to its owner Grant Moreland.

Grant is the son of the private museum’s founder Andy Moreland – he and his dad spent years building up the exhibits into what has been called one of the most significant private collections of military memorabilia and hardware in the North Island. It has also been the site of many military-type camps and re-enactments and has been used as a film set.

Grant told Cambridge News on August 12 that he had recently been given 12 weeks in which to close the museum and move it and its contents from the family-owned farm it has occupied from about 1988.

The farm is being sold, he said, a decision coming on the back of years of legal wrangling following Andy’s death in 2017.

Earlier on August 12, Grant received confirmation of the museum’s rescue at the hands of a benefactor prepared to offer space and a new purpose-built building for the collection, albeit about 30 minutes further from Cambridge than it is presently.

“It’s a fantastic lifeline … I’m still pinching myself,” he said. “I won’t go into details now, other than to say he is someone keen to give the museum a new home. I’m very grateful and relieved beyond words.”

Until the reprieve, Grant spoke emotionally of getting through one of the darkest periods of his life. An injury to his shoulder meant he had to take time off his job in Hamilton – time, it turned out, he needed for what was coming.

“Talk about stress … I know about that now. I was born on this farm, and apart from a short time away, have lived here all my life. My parents Andy and Dawn Morland were here with my grandfather Jack. My wife Kim and I live in Jack’s original house … it was here that dad and I worked together for years to build up this museum. Two weeks ago, I was told I had 12 weeks to get off the farm and move the museum and all its contents.” The iconic Bandirante being removed from its plinth at the entrance to the Tauwhare Military Museum.

Grant spent a few days at their holiday home in Whitianga trying to come to terms with the decision, then came back and put something up on social media where a clamour of support helped him rally.

Last Friday, transportation vehicles arrived to remove the iconic aircraft at the farm entrance. It’s a Bandeirante, a Brazilian aircraft popular in the 1980s, now going to a new home at the New Zealand Air Museum in Wanaka. The man doing that, said Grant, is one of the aeroplane’s original pilots.

Other historic vehicles have found homes; some will go to speciality museums around the country.

“I am finally seeing light at the end of the tunnel, but there is a lot of packing up to do,” he said.

Grant opened the museum to the public for the last time at its present site last weekend, then removed the signage. He said he will keep the public informed as to where and when the museum will re-open.

In the meantime, he needs to access some 40ft containers. “They are almost impossible to get hold of right now, and we are absolutely desperate.”